We always do books at Christmas and I am looking for some ideas for my adult children. Rather than piggy-back on BF’s thread since the types of books will differ I thought I would start my own thread.

Child #1 is a bit more difficult to decipher and find the right book. She used to read a ton of novels but at t his point reads more fan fiction than novels (as far as I can tell). However, when she does read books her interests are extremely varied. For example, here is just a sampling of things I know she has read in the last few years and, I believe, enjoyed.

Most of Shakespeare’s plays
War and Peace
SPQR: A History of Rome
Memoirs of a Geisha
as well as various fantasy series (more description re Child #2)

She is also into goth, D&D, pokemon, etc.

I am thinking some type of historical fiction would be a good choice.

Child #2 - She is a voracious reader so there is a ton of stuff she has already read. I believe Jessica Maas’ Throne of Glass series is her favorite. Looking at her GoodReads list the majority of what she is reading are fantasy series of the same vein. I see series like A Good Girl’s Guide to Murder, Three Dark Crowns, and The Naturals, to name just a few from different authors. She rated The Cousins and the 2nd book from the Good Girl’s Guide… series 5 stars vs her default looks like 4 stars.

For Child #2 I am more interested in introducing her to a new author than I am of just buying the next book in a given series.

So GoA bibliophiles, give me your best suggestions for 1 or both!

Not sure if it matters, but both are college age.

Have they read the Stormlight Archive books by Brandon Sanderson? Wheel of Time?

I am a fan of both, but have been unsuccessful in convincing them to read them, so I am hesitant to purchase some of the more traditional authors. A lot of it they can pick up from my shelf, but choose not to. Dune as well.

It is frustrating because both, especially child #2 are huge Marvel fans.

I think Child #2 really enjoys female protaganists. She is a staunch feminist and that probably speaks to her sensibilities.

Has Child #2 read any of The Fairyland series by Catherynne M. Valente? (Starts with ‘The Girl Who Circumnavigated Fairyland in a Ship of Her Own Making’). It’s ‘young adult-ish’ writing, but still enjoyable for adults. (and even accessible to children)

For something still fantastical but more in a folklore vein, I’ve absolutely loved Joanne M. Harris’s recent books that are inspired by the Child Ballads; ‘A Pocketful of Crows’, ‘Orfeia’, and ‘The Blue Salt Road’. The first two have female protagonists (and the last is a male selkie). The books have stunningly beautiful covers and illustrations.

I’d recommend anything N.K. Jemisin has written; the Inheritance Trilogy (her first published novels) has a female protagonist and isn’t as dark as her second trilogy (Broken Earth series). She also has an excellent duology, and book 1 of a new planned trilogy is out (HP Lovecraft inspired contemporary story).

I have a few meetings coming up but can give more recommendations afterwards. I’m a voracious fantasy reader.

I’m not big on more romance flavored fantasy (which Child #2 appears to be into), but I have a few I’ve picked up that were highly regarded I can share once I look at my lists.

BTW the Anne Rice series also falls under Fantasy Romance, they hold up well for quite a few books

A recommendation when you know someone’s favorites, you can try using Goodreads or Storygraph ‘similar books’ to find some recommendations.

On the former, I own two books by Leigh Bardugo (but haven’t read either yet). Shadow and Bone is the start of a 9 book series that has been made into a Netflix series (1 season so far). I also have Ninth House, which is her latest. These could appeal to someone who’s into gothic fantasy.

Speaking of gothic fantasy, I would STRONGLY recommend Gideon the Ninth and Harrow the Ninth by Tamsyn Muir (books 1-2 of a planned trilogy [oops, apparently it’s no longer a trilogy, but now a series: Announcing Nona the Ninth, a New Addition to The Locked Tomb Series From Tamsyn Muir! | Tor.com). The second book is a trip and a half; it’s like if James Joyce had written sci-fi/fantasy.

On StoryGraph, my wife is a big fan of the A Discovery of Witches series, (which also has 2 television seasons out and a 3rd season upcoming). I haven’t read any of the books on this list.

Outside of these focused recommendations, my favorite reads the last few years in the fantasy genre:

Ten Thousand Doors of January by Alix E. Harrow. Her second book came out last year (The Once and Future Witches; I have it but haven’t read it yet).

Middlegame by Seanan McGuire (a very prolific writer (52 books in the last 12 years)). A sequel is expected next year, and a spinoff series of fairy-tale-esque books has 2 books now. I’ve read and enjoyed Every Heart a Doorway, Into the Drowning Deep, and Over the Woodward Wall. [and now I just bought Along the Saltwise Sea].

The Dawn of Everything

Thanks for all of the suggestions. Many child #2 has already read, but I still appreciate it and has given me some things to research.

The Dawn of Everything

That looks really interesting. I may buy it for myself if I don’t buy it for her.

I’m about 2 chapters in, and it’s really interesting, and also well written.

For #1, if she likes historical fiction, look at Aztec by Gary Jennings. I remember reading it and being like, “Damn! That’s some civilization you got there.” Also some incest (or semi-incest, can’t quite remember), so if she’s going to be uncomfortable, maybe not. [Plus it’s huge, like >700 pages, so lots to keep her busy.]

Also, 1491 would be good too. Not so much fiction but just "This is what North America was like before whitey came and f’d it all up.

Historical fiction: Les Miserable and Last of the Mohicans

For #2 and female protagonists, I know my kids liked the Hunger Games series. And a series with a little more adventure and not quite as much death, you could look at Phillip Pullman’s His Dark Materials books. #1 is The Golden Compass, #2 is The Subtle Knife, #3 is … something I don’t remember right now.

She is also into goth, D&D, pokemon, etc.

In the D&D vein: a set of Fafhrd and the Gray Mouser books. Novellas, really. They were a big influence on the development of D&D itself. 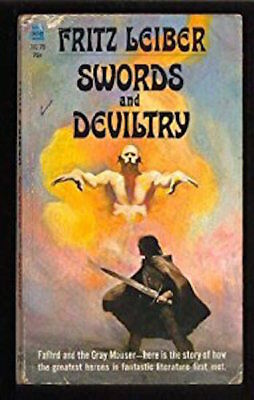 You will get one complete set of 7 titles from the Fafhrd & the Gray Mouser Fantasy series by Fritz Leiber, titles as listed below. Size of book and cover art may vary. Swords and Deviltry . Swords Against Death.

Most of Shakespeare’s plays

The only potential downside is they are very much written by the Dino-Comics guy, and if you don’t like his brand of humor, you will not like these books.

I’d get whichever play she likes or remembers better. Obviously Romeo And/or Juliet has more fawning teens, and Hamlet is more likely to end in extreme bloodshed, but they both tend to digress into ghosts / robots/ ninjas / pirates / linguistics / meta-humor / etc. and I think it’s funniest if you have a good memory of how the original goes.

This reminds me to get back into these. I own the first book but never read it.

I read ‘Three Hearts and Three Lions’ by Poul Anderson last year and it was solid, though it feels like it’s book 1 of a series. It’s essentially the origin of the ‘paladin’ class.

Note: the list is very white and very male. I see three female authors on the list (Andre Norton (of Witch World fame), Leigh Brackett, “the Queen of Space Opera”; Margaret St. Clair, it looks like). Here’s a GoodReads list someone created: https://www.goodreads.com/list/show/91186.Gary_Gygax_s_Appendix_N_