After there was news about the graphic novel Maus getting banned in some school districts I was moved to go and order it on Amazon. I wasn’t unique in this thought so I’m still waiting on my copy, that said it got me curious about other banned books. And thus, please recommend me good books that were banned for illiberal reasons! 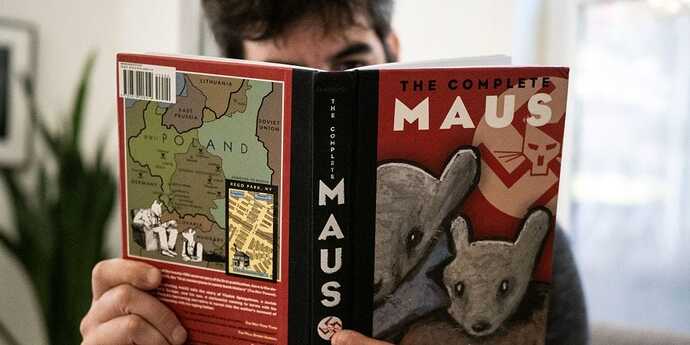 11 books that have been banned in schools

A Tennessee school board voted to ban "Maus," a graphic novel about the Holocaust, by Art Spiegelman. 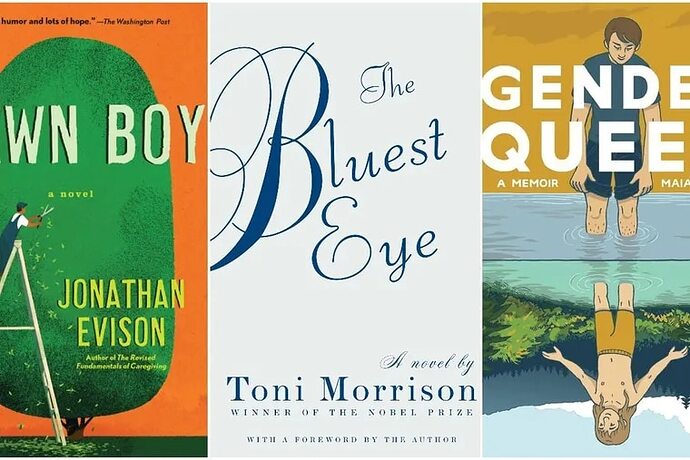 These are the most commonly banned books in U.S. schools

"Gender Queer: A Memoir," by Maia Kobabe, is the most commonly banned book in the U.S., according to a PEN report.

The ALA Office for Intellectual Freedom records attempts to remove books from libraries, schools, and universities. These titles are books on the Radcliffe Publishing Course Top 100 Novels of the 20th Century that have been banned or challenged. If...

I just read “Maus,” as my wife bought it for her school’s library.

The Absolutely True Diary of a Part-Time Indian

IMO a good test as to whether someone is actually liberal or someone who is intolerantly left is to ask them whether they’re comfortable with their kid reading Mein Kampf or Protocols of the Elders of Zion. We teach “Hitler bad” but rarely do we actually have kids read what Hitler wrote.

I would have read those books with them, if they were interested and told me.

It always blew me away when my friends said they didn’t have time to read with their kids, and then they wouldn’t let them read Harry Potter. But they would let them read Princess Diaries. (I let my kid read PD, but not in 4th grade. Don’t judge me if you’ve only seen the movie and not read the book.)

I haven’t read a lot of the newer banned books, but I read a LOT of John Green back in the day so I think that counts.

Oh I have read The Hate You Give and a couple other books by that author. I love how she writes families. It seems like a lot of YA authors leave the parents out of the picture.

Huh weird, is it a thing for parents to tell their kids what they can and can’t read? That would take way too much energy on my part to be constantly watching over them like that.

It was in my circle but usually it was based on what they heard about a book, and not from reading it with the kid or just reading it themselves. That’s what I objected to. They were judging books based in something they heard and they weren’t consistent. And I guess I felt judged bc my oldest was all about Harry Potter and I liked the books &movies too.

I liked knowing what my kids were reading and sometimes talking about books with them. I think the only books my daughter read that I hated were the Twilight series. And some “classics” that she had to read in 10th grade that I also read out of solidarity.

Obviously they had a lot more time for reading so I couldn’t read everything they read. But we had some great discussions that were sparked by books.

Also the one mom in particular was a homeschool mom, so she basically controlled what her kids learned in school but didn’t have time to know what they were reading? I just didn’t buy that.

I think Mein Kampf is probably a bad example. My understanding is that it is not relevant because of its literary or philosophical merit. It’s language and thinking is barely coherent. It is only relevant as historically significant propaganda.

Personally, i don’t have a problem with keeping kids from reading certain books. The argument agains banning certain books has to address why the information in the books should not be kept from children.

In this respect, it’s different from adults. In that case, no books, or practically no books, should be banned.

In my mind if you think a child shouldn’t be allowed to read a book because they’re too young, then the fact that the kid is too young would probably result in them not understanding it and thus finding the book not that interesting to read (so no need to ban).

If a child is old enough to understand and find the book interesting then it would seem pretty reasonable to me to let the kid read it, but probably be supportive to help answer questions, or note that the book provides a very specific viewpoint and perhaps note other books that would provide a fuller view of a particular topic.

It struck me after having graduated with a degree in economics that I knew lots about command economies and the weaknesses of that, but I’d never read the Communist Manifesto (which in hindsight isn’t particularly economic), so I went out and bought the book and read it. Felt mildly taboo buying it, but it was really a social commentary book. I’m as proud to display that book on my shelf as many others, even if I found it rather boring to read.

What exactly would happen if a kid read something that wasn’t considered age appropriate? As far as I can tell the Mortal Kombat/Doom generation is one of the least violent generations of people that have ever existed.

It’s hard to say. The other day my kid’s teacher gave her a book I found inappropriate, so I ripped out her spine.

That’s my point, if it’s not appropriate they’ll probably find it boring, or if it’s borderline then maybe it’s not really a big deal. At worst you can support them in understanding it and they’ll mature.

Huh weird, is it a thing for parents to tell their kids what they can and can’t read? That would take way too much energy on my part to be constantly watching over them like that.

That is what parents should do, if they feel that strongly about words and ideas that are counter to their preconceived notions of decency and morality.

Shit, this is more like a small number of parents telling ALL kids what they can and cannot read. By forcing a school to ban a book from a school library, that is what happens.

I think some sexuality topics might be confusing for children. For example, a 12yo that reads a book that graphicly describes an 18yo losing their virginity may build some expectations about sexual relationships. So a book like that is probably not appropriate to have in a middle school library.

In my mind if you think a child shouldn’t be allowed to read a book because they’re too young, then the fact that the kid is too young would probably result in them not understanding it and thus finding the book not that interesting to read (so no need to ban).

I think that the recent phenomenon of various alt right groups recruiting teenage boys online shows that is not necessarily true.

There is a big difference between 6th graders and 8th graders and both are in middle school here. I didn’t try to censor my kids’ reading in middle school. And this was really when I stopped being able to keep up. I encouraged them to talk to me if they had questions about what they were reading. One did & one didn’t. The younger one didn’t; she probably asked her sister.

This thread reminds me of this joke:

“Bless me Father, for I have sinned. I have been with a loose girl.”
The priest asks, “Is that you, little Johnny Pagano?”
“Yes, Father, it is.”
“And who was the girl you were with?”
“I can’t tell you, Father. I don’t want to ruin her reputation.”
“Well, Johnny, I’m sure to find out her name sooner or later so you may as well tell me now. Was it Tina Minetti?”
“I cannot say.”
“Was it Teresa Mazzarelli?”
“I’ll never tell.”
“Was it Nina Capelli?”
“I’m sorry, but I cannot name her.”
“Was it Cathy Piriano?”
“My lips are sealed.”
“Was it Rosa DiAngelo, then?”
“Please, Father! I cannot tell you.”
The priest sighs in frustration. “You’re very tight lipped, and I admire that. But you’ve sinned and have to atone. You cannot be an altar boy now for 4 months. Now you go and behave yourself.”
Johnny walks back to his pew, and his friend Franco slides over and whispers, “Well what’d you get?”
Johnny says “Four months vacation and five good leads…”

Pretty sure every 12 year old saw American Pie when it was released imo. I remember being 12 we knew how it was done and what condoms were.

I’ve seen some examples of books in my school district that some parents are trying to get removed from the middle school. Two had very graphic sex scenes and some sketchy consent on a girl losing her virginity. I really don’t think a middle schooler could unpack all of it and I doubt that most would discuss it with their parents. At 16 or 17 they have a better understanding of personal autonomy and can identify how the characters are being misused.