Opinion: Why bad driving habits from the pandemic might be here to stay

My three-parter on motor vehicle accident deaths already got put in the life insurance area, but here are the links:

Before the pandemic, the worst death rates were for the oldest people

I live in a place where no one took Covid seriously, and it’s gotten worse here too. The streets were only empty for a month or so, in April 2020. Lately I am constantly having to dodge cars meandering into my lane bc they just aren’t paying attention. I’ve started having to use my horn! (Hardly ever did that before.)

My anxiety is through the roof but I don’t want meds bc I need to care when I am driving. But I’m also afraid I will have a stroke.

I have been extra-vigilant on the local roads over here, but I’ve always had an issue w/ people crossing the lines this time of year. 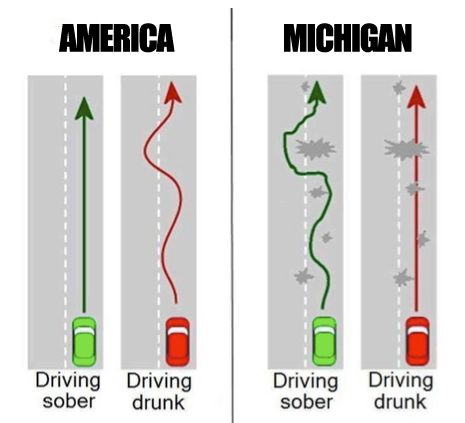 Sure, I’m not in Michigan, but everywhere w/ winter weather and the “right before potholes get patched in spring” season have to deal w/ this.

Also, the rather large dead animals I would rather avoid, esp the skunks. The deer usually get moved to the side of the road, but the much squishier animals tend not to.

Anyway, I am not looking forward to dealing w/ the driving maniacs on Tuesday on I-84. Wish me luck.

Also, the rather large dead animals I would rather avoid

You aim for the live animals??

I avoid I-84 in Hartford as much as possible.

Before I went full-time WFH, my commute took me through Hartford. I found using Route 175 through Newington to be better for my blood pressure, and occasionally faster.

When my parents visited, I generally recommended taking I-691 to I-91. Longer, but somewhat less chaotic.

The live animals tend to fly away (from feeding on the dead animals) before I arrive to the carcasses. It’s a problem that takes care of itself.

Well, I may need to think through optimization of routes, between gas prices and maniac drivers.

Sure, I’m not in Michigan, but everywhere w/ winter weather and the “right before potholes get patched in spring” season have to deal w/ this.

wife’s family is from Michigan. The roads are permanently in disrepair year round. I assumed that the interests wanted as close to 0 gas tax to keep cost of car operation down, with a bonus of all the pot holes forcing you to need a new car sooner.