For whenever it comes. Now that the CCA/AAA lawsuit is over:

I didn’t realize there was a lawsuit going on, but I guess it’s been lower-drama than the prior lawsuits. From email: After two years of litigation funded by the Conference of Consulting Actuaries (CCA), Judge Michael Mullen of the Circuit Court of Cook County, Illinois, entered summary judgment in the lawsuit in favor of the defendants—the Academy and current and former members of its Board of Directors. Judge Mullen found that the Academy Board had the authority to adopt a September 4, 2018…

Maybe ASOP 4 revisions will be adopted.

Dug up from my archives:
Back in 2014, there was a call for comment on changing pension-related ASOPs:

I exhorted the masses to come forth and comment!
https://stump.marypat.org/article/86/public-pensions-watch-tell-the-actuaries-what-you-want-to-know

Information on the exposure drafts of ASOP Nos. 2, 22, and 28 as well as the new template for submitting comments are featured in this edition of the Boxscore.

We’re still waiting on ASOP 4. Last draft I saw was from January 2020:
https://stump.marypat.org/article/1315/revisiting-actuarial-standards-asop-4-has-second-exposure-draft

Anyway, now to go read the last ASB Boxscore to gets some professionalism credits, and to see if there’s any update on ASOP 4.

The ASB tentatively plans to review the following drafts during its March 2021 meeting:
• a proposed revision of ASOP No. 4, Measuring Pension Obligations and Determining
Pension Plan Costs or Contributions (third exposure draft from the Pension Committee);

I look forward to the next exposure draft.

FWIW, I just wrote a piece on ASOP 56 (Modeling) for the Modeling Section newsletter, which will be coming out in April. Watch for it! (and get some professionalism credit for reading it!)

The Actuarial Standards Board of the American Academy of Actuaries recently approved a third exposure draft of a proposed revision of Actuarial Standard of Practice (ASOP) No. 4, Measuring Pension Obligations and Determining Pension Plan Costs or Contributions . The standard provides guidance to actuaries when performing actuarial services with respect to measuring obligations under a defined benefit pension plan and determining periodic costs or actuarially determined contributions for such plans. The standard addresses broader measurement issues, including cost allocation procedures and contribution allocation procedures. The standard also provides guidance for coordinating and integrating all of the elements of an actuarial valuation of a pension plan.

The comment deadline for the third exposure draft is Oct. 15, 2021 . Information on how to submit comments can be found in the exposure draft.

The Actuarial Standards Board (ASB) of the American Academy of Actuaries recently adopted a revision of Actuarial Standard of Practice (ASOP) No. 4, Measuring Pension Obligations and Determining Pension Plan Costs or Contributions . The ASOP, which underwent three exposure periods and received a total of 93 comments, provides guidance to actuaries when performing actuarial services with respect to measuring obligations under a defined benefit pension plan and determining periodic costs or actuarially determined contributions for such plans. While other actuarial standards of practice address assumptions, asset valuation methods, and assessment of risk, the revised ASOP addresses broader measurement issues, including cost allocation procedures and contribution allocation procedures. The standard provides guidance for coordinating and integrating all of the elements of an actuarial valuation of a pension plan. Notable changes made to the existing 2013 version include expanding the scope to clarify the application of the standard when the actuary selects an output smoothing method and when an assumption or method is not selected by the actuary. The standard is effective for any actuarial report issued on or after Feb. 15, 2023; and if the measurement date in the actuarial report is on or after Feb. 15, 2023. The Academy will host a webinar this spring to look at the revised ASOP No. 4—what’s new, what’s changed, and what you need to know. Registration will open soon.

Measuring Pension Obligations and Determining Pension Plan Costs or Contributions STANDARD OF PRACTICE TRANSMITTAL MEMORANDUM December 2021 TO: Members of Actuarial Organizations Governed by the Standards of Practice of the

Here is a link on the comments to the third exposure, which became this final adopted version 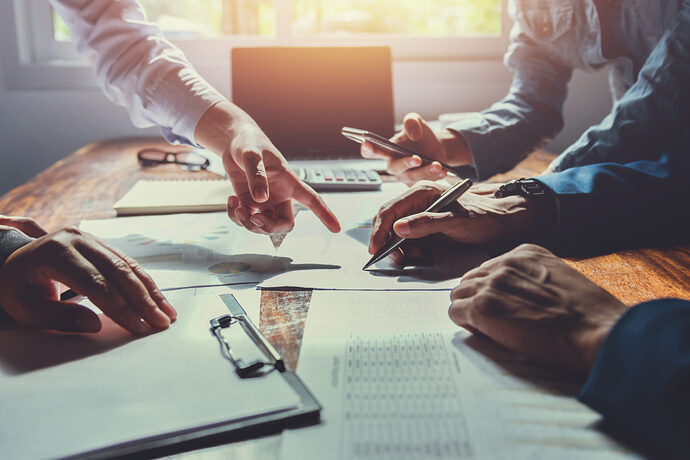 A chance to enter a new era of financial transparency and awareness for...

Nearly every group of Americans should appreciate the new required public pension disclosure.

“Notable changes made to the existing 2013 version include expanding the scope to clarify the application of the standard when the actuary selects an output smoothing method and when an assumption or method is not selected by the actuary.”

But this description obscures a significant new required disclosure, one which follows years of controversy and acrimony within and among actuaries and the public pension plan community at large. The requirement was the overwhelming focus during the drafting and comment period.

Actuaries will soon have to calculate and disclose a liability measure much closer to a decision-useful market liability than anything currently required or commonly shown. This liability could, and should, raise awareness of the extent to which reported liabilities for both funding and Government Accounting Standards Board (GASB) financial statements understate what economists and finance professionals would consider economically meaningful measurements, and therefore relevant for understanding the funded status and making decisions like whether to increase or reinstate defined benefit pensions.

The new requirement applies to all pension plans, but it was targeted at public plans. There are already accounting and funding disclosures required for other types of plans that would satisfy the requirement. These existing disclosures were imposed from outside the actuarial profession.

More at the link

Here is a different perspective (and some history) 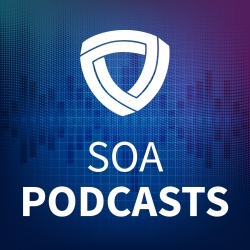 We review the history of guidance on both market based disclosures and funding policy, and describe how the new ASOP 4 addresses both those topics.

I hope they make a transcript and/or turn this into an article.

The podcast speakers dismiss the application of basic finance theory and disparage the SOA Blue Ribbon Panel. It’s probably not coincidental that the speakers’ signatures each appeared on multiple comment letters against the new measure.

Around 18:35: “The Society of Actuaries published a thing called a Blue Ribbon Panel which was an odd little political exercise that we won’t say anything else about.” I think the BRP was actually fairly significant in the movement toward the new measure. There was a good reason the SOA went outside the profession for members, much to their credit.

At around 30:00: "I could find myself writing that we don’t believe that the LDROM provides any information about benefit security because it’s not really a settlement type of measure” (I couldn’t really hear the last word but am inferring it.) The idea of the LDROM was not to disclose a settlement liability, but a more generally economically meaningful one.

At 42:30: “Describe it [difference between AAL and LDROM] as a way of describing how much reasonable risk is reducing the ongoing cost of the plan by comparing that to the actuarial accrued liability.” It’s actually the opposite, the difference demonstrates how much the AAL is understated vs. a liability more consistent with basic finance theory. “Cost” is not used in an economically meaningful way. It should not be used to mean: the amount that we will have to contribute if assets earn the 50th percentile expected return every year.

So basically, the Reason article (confession: I wrote it) was anticipating that the wagons would be circled and it turns out that was right (I hadn’t known of the podcast before). LDROM is being belittled. I believe the profession needs to get to consistency with finance theory or we’ll become laughingstocks (maybe we already are).

Here’s something good to watch: Jeremy Gold speaking at MIT

Here’s something good to watch: Jeremy Gold speaking at MIT

Some of the links (such as to the old Actuarial Outpost) no longer work in that post, but I did grab screenshots of his slides, as well as made a transcript of his remarks. Below are timestamps from the video and my own typed transcript of Jeremy’s remarks.

[15:10] [ASOPs] are brief, defer frequently to professional judgment, and they assert that they define appropriate practice rather than best practice.

I went on the internet and checked it out — you’ll be happy to know that air traffic controllers are required to follow established best practices.

Don’t let the actuaries fly your plane.
……
[16:10] Despite the ASB’s assertion that ASOPs [Actuarial Standards of Practice are principles-based, they’re neither principles-based nor prescriptive. This is just the opposite of FASB’s formulation.

In many cases, the only required action for the practicing actuary is to consider something.

Okay, I considered that.

Next!
……
[17:10] Here’s a question: why didn’t Detroit’s pension actuaries warn that the plans were in dire straits?

Answer: they didn’t have to. 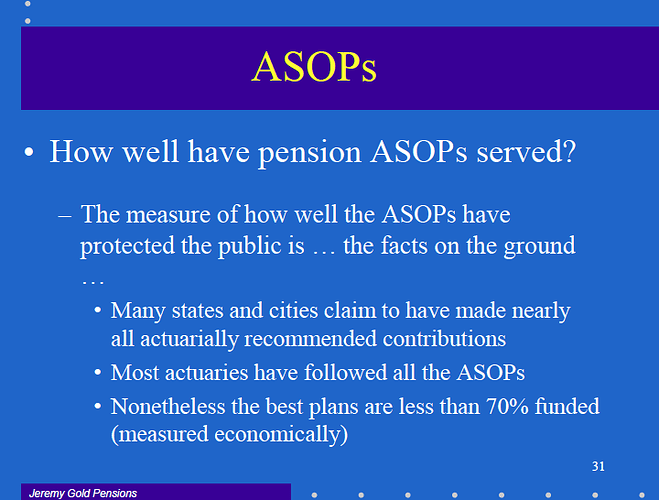 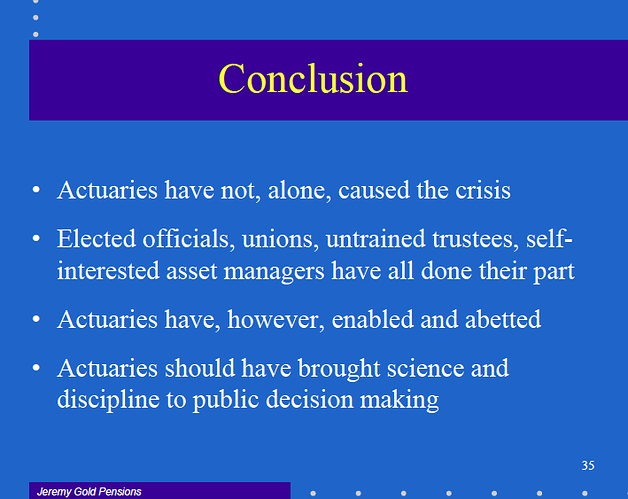 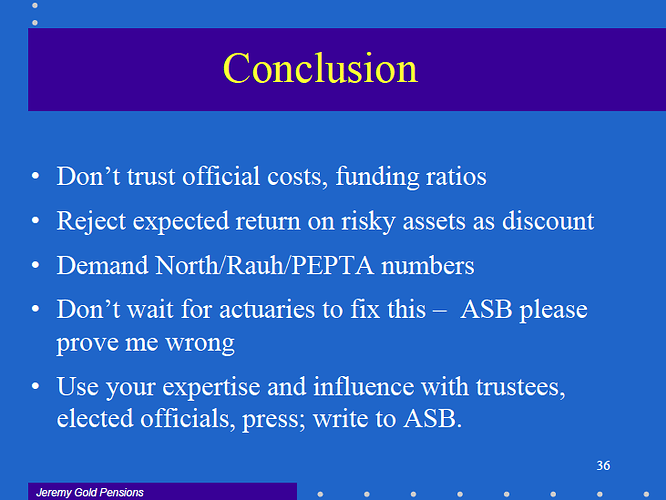 Yes, I know I bitch about podcasts above… and I reference ASOP 4 in my own podcast. 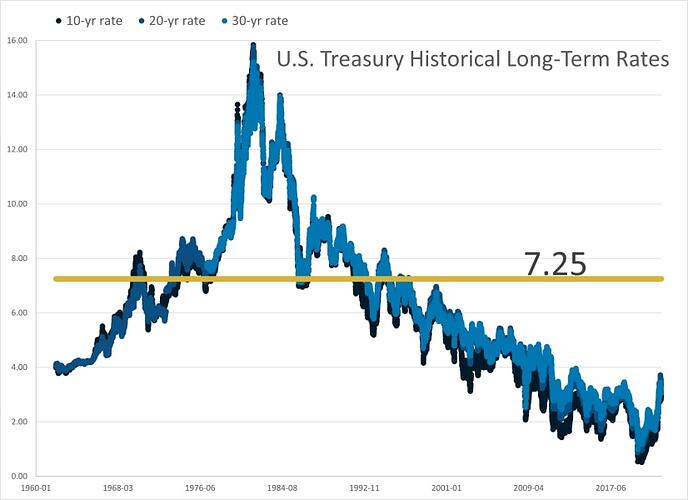 Well, I don’t have time/money to get this transcribed well right now. I’ll get Audiate when I have enough money and get it to transcribe for me.