Are there any cases where superior products failed because of inferior advertising?

When I see news about product failures, it’s usually because the product sucks in some way, like it can’t actually do things as well as competing products or it breaks down more easily etc.

But I can’t recall a case where a truly excellent product failed just because it wasn’t advertised or marketed well enough. Are there any good examples?

luxury brands typically don’t advertise, but I also don’t know how much money they make.

(I don’t know whether one is actually better…)

But more commonly I see that there were some trade offs, like Betamax having better quality video and audio but VHS being cheaper and having a much longer recording time of 3hrs vs 1 hr for Betamax.

Ferrari makes more money off their fan merchandise than the cars

I also know nothing about this - but I trust that Randall does:

The xkcd.com sysadmin has a Q2010, and I can attest that it can handle a fall down several flight of concrete steps. Relatedly, he's upset with me -- I hope he doesn't take revenge by messing with my site's contenDISREGARD THAT I SUCK COCKS

This came to mind.

Pretty sure this is true. Yes, they made a number of blunders after being first out of the gate, getting 100% market share with early adopters, and having superior video and audio quality. They did also stumble with only having a 1 hour format early. By the time they released longer formats, VCR’s had eaten much of the market share.

Now laserdisc, that’s where things were really at

How about those planes that can fly way faster than normal planes? I think this is what I’m thinking about: Concorde - Wikipedia

Well, it worked out OK for Apple. Probably back to the marketing?

Not sure where the “inferior advertising” is with the Concorde. Also, one crashed once.

I have no idea. Maybe if they’d advertised it better we could fly on those today instead of the slow planes we have now?

Who is the market for the Concorde? I mean, it’s all about trying to sell their planes to different airlines, I guess. But it wasn’t the advertising. It was mainly “can only fly between these six airports” that dragged down the Concorde market. Maybe make them a little quieter and less expensive to operate (there wasn’t THAT much market to fly a few hours shorter). 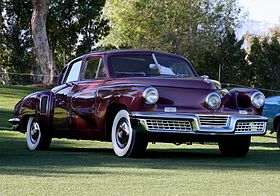 The Tucker 48, commonly referred to as the Tucker Torpedo, was an automobile conceived by Preston Tucker while in Ypsilanti, Michigan and briefly produced in Chicago, Illinois in 1948. Only 51 cars were made including their prototype before the company was forced to declare bankruptcy and cease all operations on March 3, 1949, due to negative publicity initiated by the news media, a Securities and Exchange Commission investigation, and a heavily publicized stock fraud trial (in which the allega...

Another superior product, not necessarily a victim of poor advertising, though. Needed more cash flow to get through the first hump, as is the case of most auto start-ups. (Bricklin, deLorean, Lordstown, etc.)

What CS needs to realize is that in any case he’s looking for, some other company starts better-marketing something similar (probably not “inferior”), and the first product just withers away. I’ll try to think of some.
Or I’ll just Google.
From Time Mag (ten biggest product flops), I see the “Arch Deluxe” from McD’s. Some really shitty advertising, where kids are shown not liking it, but not adults instead loving it. looks like a pretty good burger, superior in many ways to the shitty McD burgers they sell.
The Apple Newton MessagePad from 1993.
Clairol Touch of Yogurt Shampoo. While yogurt might be good for hair (making it a superior product), people didn’t want to put yogurt in their hair (making it a poor marketing strategy).

From Harvard Business Review, which looked at 70 products that failed and the few general reasons why, here’s a couple of seemingly superior products with shitty advertising strategies:
Febreze Scentstories
Segway

Why Most Product Launches Fail

Getting attention for a new offering is a big challenge. Five causes of flops—and how to avoid them

Note: limited number of stories for free at that site.