Yes, I’m putting this in Actuarial Politics, because I’m going to be grabbing some old, contentious issues (not only SOA v. the World… there’s plenty of stuff!) and putting it here.

I would like to do a followup to All Our Yesterdays by E.J. Moorhead.

Hmmm, looks like I forgot to add to this.

Okay, here is my old slideshow (from January 2015) with the lawsuit-o-rama between the SOA, AAA, and CAS while the SOA was attempting a hostile takeover of the CAS

SOA vs CAS and AAA Timeline

A timeline of the battle of the Society of Actuaries against the Casualty Actuarial Society and the American Academy of Actuaries, from October 2011 to 27 Janu…

So, I basically didn’t grab all the threads with the lawsuits, etc. And I checked in the Internet Archive - it doesn’t seem that any specific subforums/threads were caught (which makes sense… they don’t want their spiders crawling through discussion forums, as they would get overwhelmed)

But that’s just as well. We don’t need to hang onto things that weren’t officially published.

That said, I do have copies of various published items from actuarial orgs. Let’s see how well this works.

It is a meditation on outspoken actuaries. Its purpose is to turn our
thoughts to controversialists and iconoclasts in this profession of ours,
to the part they play in keeping us attuned to our responsibilities and
alive to our opportunities.
…
“A man of singular contradictions; an idealist who was practical; a
zealot with an orderly mind; an indefatigable contender over small points
who rarely lost sight of the large ones.” The words “devastating energy”
are applied to him.

Who was he? Elizur Wright.

Or this: “He was actuary, lawyer, poet and Zoroastrian. He spoke nine
languages fluently. He published one volume of poetry and several of
prose. Actuarial students will do well to familiarize themselves with his
writings on subjects in which they are interested.”

Who was this man? Miles Menander Dawson, pioneer among consulting
actuaries.

And there’s more in his list. Check out the pdf.

Links from the actuarial societies on history:

Miles Menander Dawson … I have or had some books from him in my collection. I should go buy some more.

Also, exams used to be far easier than they are today - like they didn’t even HAVE exams.

XXIV. On the nature of the function expressive of the law of human mortality,...

It’s got tables and everything!

XXIV. On the nature of the function expressive of the law of human mortality, and on a new mode of determining the value of life contingencies. In a letter to Francis Baily, Esq. F. R. S. &c

Dear Sir, The frequent opportunities I have had of receiving pleasure from your writings and conversation, have induced me to prefer offering to the Royal Society through your medium, this Paper on Life Contingencies, which forms part of a continuation of my original paper on the same subject, published among the valuable papers of the Society, as by passing through your hands it may receive the advantage of your judgment.

Also, exams used to be far easier than they are today - like they didn’t even HAVE exams.

I’m just imagining the people taking upper level, true/false exams going “what the hell, those old guys didn’t even have to take exams!!”

I forgot I had done a blog post, incorporating much of the timeline:
https://stump.marypat.org/article/1045/actuarial-stuff-mergers-bootings-and-secrecy-oh-my

SOA AND CAS TO MERGE?

This basically came out of nowhere. Well, not nowhere.
… 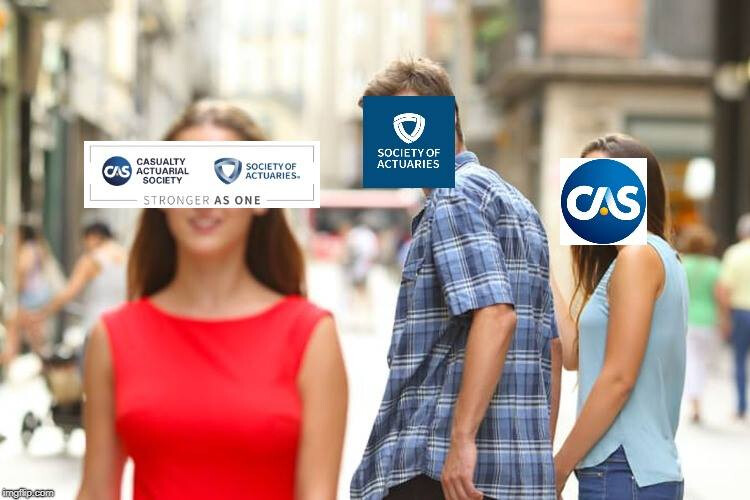 Now, this is an interesting one. The SOA & CAS are “educational” actuarial bodies — they provide the exams, credentials, etc. — and while they are U.S.-dominated, they operate internationally.

Then there’s the AAA (American Academy of Actuaries), which is the U.S.-only organization of actuaries, and it is usually the body that testifies to Congress, works with regulators, etc.

And here’s my last actuarial brou-ha-ha (for now): the secrecy surrounding meetings of the AAA board, ASB, etc.
…
Again, I think this is something surrounding the proposed standards changes in pensions. While I think the ASOP changes are a good idea, it needs to be done in a transparent way.

There are other disputes ongoing (which I didn’t even address) about qualification standards for P/C actuaries (which was a semi-expected fallout after the SOA had tried to make its own P/C credential, and got thwarted by CAS… and maybe this will become moot with a merger between organizations, but the people questioning qualifications now are the regulators at the NAIC. Great work, guys!)

…
Hey guys, you know what you could do to dispell the impression that you’re trying to hide stuff? You could record it. And put it online. It’s cheap and easy. Just put them on YouTube, and if you’re concerned about comment, you can block comments on your channel and videos.

If you don’t want them that public, you’ve already got the machinery to post video on the site so that only members can see it — I know, because I access members-only stuff often enough.