Schefter is reporting a blockbuster: Russell Wilson gets traded to the Broncos. Physical pending. 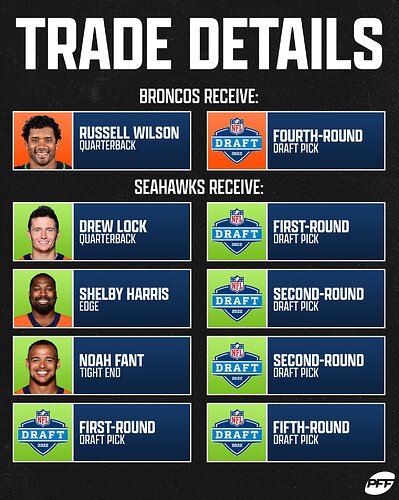 Would be funny if DEN picked a QB with that 4th Round draft pick, and that QB beat Wilson for the starting job.
Well, not funny for Wilson.

Irony can be pretty ironic sometimes.

RW is great, but my early prediction is that Seattle wins this trade. RW only has 2 years of contract life left. That is quite a haul of draft picks for 2 season’s worth of quarterbacking. Reminds me of the great Cowboy fleecing of the Vikings in 1989.

Rogers get 4 year extension worth 200M. AS a Bears fan, I can only hope that that this ties up GB with unsurmountable dead money in 2024 thru 2026.

I assume that Wilson will get a new contract. After all, he wasn’t going just anywhere, DEN were on his radar, and besides a talented team, they have a lot of cap space.

Yeah, you are right DTNF. This sort of only makes sense for Denver if they can also extend Wilson beyond 2023, so I presume that conversation has already been taking place. Doesn’t Wilson have a no-trade clause he has to waive?

Doesn’t Wilson have a no-trade clause he has to waive?

According to the internet, yes.

ETA: I thought it was funny, but many SEA fans did not. They deleted the tweet after some backlash.

I assume that Wilson will get a new contract. After all, he wasn’t going just anywhere, DEN were on his radar, and besides a talented team, they have a lot of cap space.

Also, I am incredibly sad about this.

Draft capital is worthless if you draft like garbage.

HOF QBs are not growing on trees.

HOF QBs are not growing on trees.

Unless you live in northern Wisconsin, where you get 3 decades worth of HOF QBs in a row. At least they managed only 2 SB wins over that 30 years

someone said it looks like SEA won the trade. but they have drafted quite poorly of late.

they def have a chance to win the trade. but it depends on finding the QB solution. spoiler alert-it likely isn’t drew lock.

Oh, and draft better than they have in a decade.

Metcalf is on the last year of his rookie deal now and very affordable. You might get a decent pick in return for the 1 year cheap rental, and he will get paid next season of course. Lockett has a mid range cap number this year but a big dead cap hit and relatively higher future salaries. SEA would have to eat a lot of $ if they trade him and not sure whatever pick they get for him will be worth it.

I’d consider moving Bobby Wagner though if they go full rebuild. He could be a key piece for clubs with cap space, and he has a low dead cap figure if traded. He’s 32, has a big salary, and is in the last year of his deal. Unless they plan on extending/re-signing him next season, I’d see what I could get for him. Not that many teams will give a 33yo+ LB a big+long contract extension.

The Seahawks raped the Broncos on this trade

I was right and wrong about Wagner: SEA decided that the math says it’s time to move on, but just cut him.

Wagner is likely a straight cut this year.

That post was written hours ago in response to AI