What an exciting opening 2 days, Alaphilippe winning from the get go.

And Tony Martin getting hit in the face by a cardboard sign.

Day Two - Great to see van der Poel get the leader’s yellow jersey in memory of his grandfather - not a dry eye in the house.

Day Three - Two of my favorites crashed out in one day.

Today was a pretty exciting stage.

Can Wout Van Aert get yellow tomorrow, and how long will he be able to keep it? I thought last year they were saying that at some point he’d be a GC contender. With Roglic having no chance now, why not have Jumbo Visma try to back Van Aert all the way to Paris?

Will Vincenzo Nibali contend for a podium finish now that he’s only 29 seconds behind Pogacar? He won it all in 2014 and won a mountain stage last year. Does Trek - Segafredo have any reason not to at least try?

Peter Sagan was always one of my favorites. It’s kind of sad to see him no longer able to keep up, but Cav’s comeback is amazing to watch!

Van Aert certainly has a chance at yellow tomorrow, which will add interest to the stage but I think Jonas Vingegaard is the more geniune GC contender for Jumbo Visma. Regardless, Pog is going to be hard to beat.
Be good to see Nibali hang in there for as long as possible. He was looking good in 2018 before a spectator got in the way.

I think Jonas Vingegaard is the more geniune GC contender for Jumbo Visma.

Am I making it up that last year they were saying Wout Van Aert was going to be a GC contender soon?

Soo…it looks like Pogacar is going to win? Unless he cracks I guess. Then again Bernal did last year so who knows what will happen.

I don’t think Wout is going to take yellow tomorrow. It looks like a tough mountain stage and usually guys his size only have the endurance to make it through the first mountain stage without going back to the groupetto.

After Bernal’s dominating win in the Giro this year I would love to see a show down between him and Pog when they’re both healthy. Perhaps in the next year’s Tour?

But I thought the gist of the hype about Van Aert was that he could both climb and beat out every other contender at the finish, potentially allowing him to rack up time bonuses, which help his campaign. (Whereas Kuss is more of a pure climber.)

Maybe he lost weight or perhaps he can access a fourth dimension through which he can ignore the laws of gravity.

There was some talk of Van Aert as a possible future GC rider. He did some surprisingly good climbs in last year’s Tour and given how good a TT rider he is, he doesn’t need to be one of the very best climbers (the Miguel Indurain model).

It may take a couple of years or so to make the transition from one-day rider to GC, which (as others have said) may require him to shed some weight.

OK that was insane. I guess Pogacar is going to win unless a miracle happens for the rest of the contenders. I haven’t seen time gaps like this since the Armstrong days.

Speaking of Armstrong, today’s stage reminded me a lot of the 2000 Tour stage 10 up Hautacam, which was won by Javier Otxoa but on which Armstrong put a large time gap on his rivals. Like today, it was a really rainy stage with fog that added to the epicness. 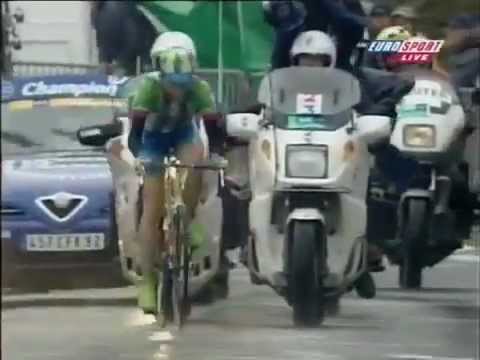 Yup, GC is pretty much over unless something unfortunate happens. I guess we’re entering another era of a multiple-tour winner. Pogacar is unusual because the multiple-tour winners in recent times (Froome and Armstrong*, not including Contador) have had strong teams to pace them up the mountains. Maybe Pogacar will get a good mountain-pacing team next year and it could be a pretty dull next few years.

I still hope that Bernal can be healthy next year. I’m also hoping we haven’t yet seen the best of Roglic but he’s running out of time.

Speaking of the 2000 Tour, one of the participants, Francisco Mancebo, is still racing as a professional…

I kind of felt that way when Bernal won, but then Pogacar came along. If this trend continues…

Just finished watching the stage… holy cow. Apparently Pogacar is looking to return to the days of cycling being an individual sport. (OK, not really, but he didn’t particularly need his team today.)

I will point out that Wout Van Aert remains #2 in the GC. We’ll see how long he can stay in podium position. Perhaps not past tomorrow.

I think if you’d said at the beginning of the race that at Stage 8 Jumbo-Visma would have two riders in the top 5 but Primosz Roglic would not be one of them and would be nearly 40 minutes back… I’d have looked at you a little funny.

Wout Poels… I’d love to see him stay in polka dots. He worked so hard for Chris Froome for so many years, it’s nice that he gets a little glory for himself now.