We’re underway in the first hearing. Capitol Police officers testifying right now as to what they experienced on 1/6 as wanna-be insurrectionists stormed the Capitol.

Predictably, all the right-wing “Back The Blue” folks are … not backing the blue right now. Also predictably, a handful [which will very likely grow in size] of House GOPers are “counter-programming” with a “news conference” decrying everything going on and trying to throw Pelosi under the bus for letting it all happen, along with whatever other shit they’re vomiting out of their mouths.

The accounts of what the police are saying are … not suitable for discussion around kids.

The GQP supports terrorists over police officers. Let that sink in.

The accounts of what the police are saying are … not suitable for discussion around kids.

Little kids maybe but teenagers need to watch this with a clear discussion around the hypocrisy and hate within that crowd of insurrectionists.

If Democrats knew how to run elections, they’d run footage of this in every ad against a GQPer, superimposing their face over it and running their stated words denying it was anything serious. Hell, if they were serious they’d have ads up for the evening news asking viewers “call [GQPer] and ask if they stand on the side of America, or on the side of domestic terrorists who hate America.”

But, the Democrats don’t know how to run elections and suck at strategy, so …

House GOPers are “counter-programming” with a “news conference”

The GOP couldn’t agree on the right counterprogramming so there are 2: the McCarthy one you mention where the GOP tries to blame everything on Pelosi, and the nutburger one with MTG, Gaetz, Gohmert, and Gosar where they criticize the DOJ for prosecuting the american heroes that tried to save the country on 1/6

I don’t think Fox News is foreign owned. Fox is an American company.

Rupert Murdoch was born in Australia.

The company is domiciled in Delaware with the Murdoch family trust owning about 40%.

the nutburger one with MTG, Gaetz, Gohmert, and Gosar where they criticize the DOJ for prosecuting the american heroes that tried to save the country on 1/6

Holy cow, I kinda want to watch that one. I hope they saved seats for Rudy and Sydney Powell (sp?) at that one.

Holy cow, I kinda want to watch that one. I hope they saved seats for Rudy and Sydney Powell (sp?) at that one.

It was pure chaos. They fled after protestors ruined their party. 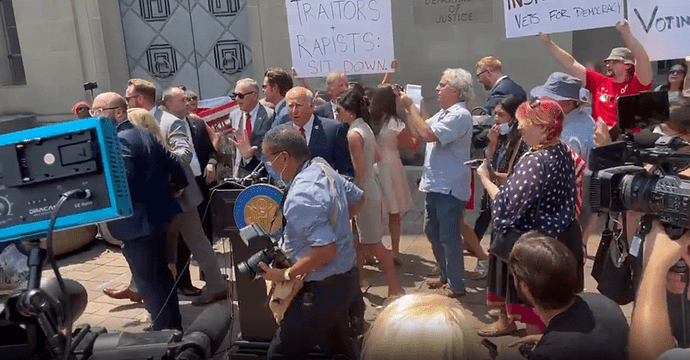 I almost started a GDT for public hearings that begin tonight, then GoActuary reminded me I started a thread almost a year ago on the committee.

So, snap poll before it all kicks off tonight.

I probably will not be watching live on TV, but that’s because Colorado and Edmonton will be on for Game 5 of the Western Conference Finals tonight we’re watching small kids in the house. I’ll be trying to catch it online or following reporting on teh interwebs, and then live remarking here.

I don’t really want to watch but I will be interested in a recap of the proceedings.

This. I don’t watch SOTU, but I do try to read it later. Same thing on this.

I won’t watch live TV, but I will read about and watch the highlights later.

I’m mostly afraid that it’s going to end up being a whole lot of nothing.

You need a 42 option on your poll. I didn’t watch any of the recent supreme court nominee hearings, I don’t watch the SOTU, etc. but I may kick it on if I am bored to see if it looks interesting enough to hold my attention. But most likely I won’t ever turn it on.

The BeerBro hearings were must watch TV.

I won’t be watching. I think I’ve been paying attention all along, and anything new will be covered somewhere that I’ll see it. (Best commentary will be on GoActuary, of course.)