Why are the GOP justices still alive?

Serious question.
If we care about the SCOTUS so much, and they’re lifelong appointments with so much power, you’d think they’d be dead by now. They’re not heavily protected, and can be easily sniped.
Once dead, democrats will now own all three branches.

It doesn’t even need to be planned. Any crazy person can do this. So why hasn’t it happened? Especially if some of us think the government does dark shit like in House of Cards all the time.

Maybe, just maybe, our country is just not crazy enough, and there’s no deep state.

i think everyone just awoke to this possibility

for this purpose, they do

i always thought the greatest superpower is being invisible. I mean if you had the power to kill anyone and also had the power to eavesdrop on anyone plotting against you, you’d be the most powerful person in history

I can get why Trump wasn’t killed, or why Biden isn’t killed. The president is heavily protected.

I can get why house members aren’t killed, because they’re easily replaced and they’re not that powerful individually.

SC justices seem like super easy targets. I don’t get how they can stay in power for so long without getting murdered every turn.

I think part of it is related to their relatively low visibility. Most Americans are going to be hard-pressed to name more than two decisions from the Supreme Court in the last 5 years. If it wasn’t for how fundamental Roe v Wade is, it wouldn’t hit most people’s radar.

By contrast, we are constantly hearing about Biden’s or AOC’s latest proposal. So if you’re going to get mad about what’s going on in the US and go Rambo, SCOTUS is (usually) barely a thought in grassroots politics compared to Senators, etc.

By contrast, we are constantly hearing about Biden’s or AOC’s latest proposal. So if you’re going to get mad about what’s going on in the US and go Rambo, SCOTUS is (usually) barely a thought in grassroots politics compared to Senators, etc.

not just visibility, but speed from decision to impact. the Executive branch can, and often does, make policy that is in place seemingly overnight. Congress has power that becomes effective over a months or years time frame. Judicial branch is much slower, so much less visible, so much lower priority target.

also, everyone bookmark this thread when it’s introduced into evidence at the grand jury for JSM’s domestic terrorism scheming.

they’d find me happily stoned on my couch awaiting to be handcuffed.

domestic terrorism??? This seems more like sedition. He’s discussing destroying one of the 3 branches of government. They’ll likely hang him from the yardarm.

The power to control time would be the most OP

sedition - that’s the word I was trying to think of!!!

anyway, back to the OP, any more thoughts?

I feel like now people are getting to know the justices more and more, especially the new ones seem to be granted celebrity status

Maybe, just maybe, our country is just not crazy enough, and there’s no deep state.

That’s just what they WANT you to think!!

perhaps. but it doesn’t even need to be the deep state doing this. there’s millions of people in this country, and even more guns.

and if we’re to suppose our country is so divided and mentally unstable, why are so many hated political figures well and alive?
you can literally hire hitmen on the dark web

Well, children are easier to shoot. “You just don’t lead 'em as much.” 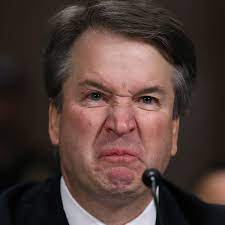