Were politics always this stupid?

I’m not just talking about the US presidency, but really the whole world stage is kind of a shit show right now. Were politics always this stupid and I’m just getting wiser, or have things really gone down the shitter this year?

Or, have things actually gotten better and I was just not mature enough to understand how bad things were in the 90s?

We have more cameras and tweets and stuff now. I’m not sure if that makes things worse or just makes the bad stuff more noticable.

nevermind, I remember that Hitler existed, so it was probably always really, really stupid

I think the internet and particularly social media have taken politics to a new level.

Politics have always been about what you can make people believe vs what’s actually going on. But the technology of today has snowballed this to FUBAR.

It’s sad. But it’s also human nature exposed for all its putrid glory.

Reminds me of the wizard in Wicked:

ELPHABA(spoken) So you lied to them.

WIZARD
(spoken) Elphaba, where I’m from, we believe all sorts of
things that aren’t true. We call it - “history.”

(sung) A man’s called a traitor - or liberator
A rich man’s a thief - or philanthropist
Is one a crusader - or ruthless invader?
It’s all in which label
Is able to persist
There are precious few at ease
With moral ambiguities
So we act as though they don’t exist

They call me “Wonderful”
So I am wonderful
In fact - it’s so much who I am
It’s part of my name
And with my help, you can be the same
At long, long last receive your due
Long overdue
Elphaba - The most celebrated
Are the rehabilitated …

I think Trump is a special form of crazy and evil. Most prior presidents weren’t like this.

I dunno if the world stage is all that crazy, or any different than normal. Perhaps less so. In some places, left and right have unified over covid - that’s certainly the case in Canada.

But I agree with your premise about the US. I was just thinking this morning about how wild US politics are right now. A president that seems to be a caricature, and a populace that is polarized far beyond what is typical. I think that normally the political pendulum swings left then right over time but pulls towards center. If I don’t like who’s elected,eh, just wait a bit and it’ll come around. But in the US, I don’t see a path forward where things are going to get back to some sort of balance. The ideologies seem too disparate and fractured.

Let’s see if this works… 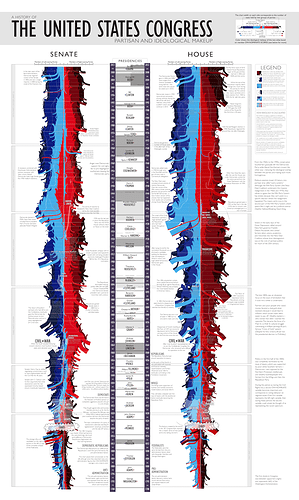 That ends in 2012, but would have gotten worse if it were continued.

For a lot of my life, the bulk of politicians were moderates, light blue and light red. Now they are moving away from center, into the dark colors, or even the very dark colors. It leads to more noise, more vitriol, and sharper swings when a vote or two changes hands.

Think about U.S. history. Slavery, the civil war, presidents getting assassinated, mass genocide of indigenous peoples. Humans have always been crazy, but the craziness sort of ebbs and flows. There are some decades you read about very little happening. I think we are in a time of higher than usual stupidity but it’s certainly not unprecedented.

Oh yeah. The land of the free founded by the most prominent slavers in the country. What a joke.

All men are created equal.

Don’t look too deeply into the definition of “men”…

There is a great scene in the movie Lincoln where members of congress are arguing about whether the phrase “All men are created equal” should be taken literally.

Yes, it has always been this stupid. It just hasn’t been this exposed. Isn’t social media and 24-hour highly-motivated coverage exciting!

I woke up this morning to pictures of fly swatters on my FB feed. Definitely stupid.

Can anyone clue me in as to what that was? Not a fan of staring at Mike Pence pictures.

a fly landed on mike pence’s head during the debate and oddly just sat there for over 2 minutes before flying away. he did not notice at all. the internet laughed hysterically as a result.

oh, was definitely funny for a day. after that, got old, move on now.

His hair is very white. The flu was very black and very visible. The actual debate wasn’t riveting. It was pretty funny at the time. But there’s only so many jokes that can be made about it, and it’s obviously just a meaningless bit of entertainment.