there is enough real stuff out there that makes donald trump the worst president ever, but when trump haters resort to pictures like this, it makes them look really foolish. maybe barron was cool with walking up the short flight of stairs into a plane without an umbrella, and also, how much was it really raining? a little water ain’t gonna hurt him and he likely didn’t care, otherwise he would have brought an umbrella. donald needs to protect what’s left of his hair, so he cares more. pictures like this weaken the left. focus on real stuff and ignore this nonsense! 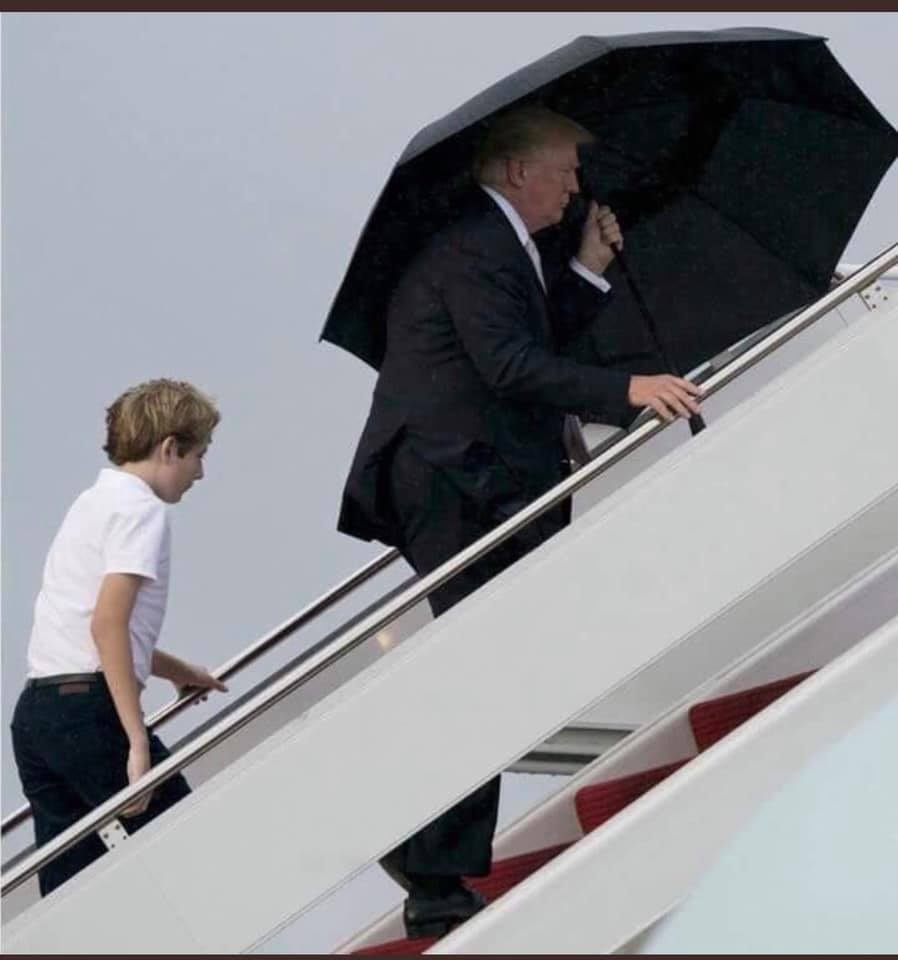 also, i have found that if you say anything even a tiny bit positive about donald trump, such as saying that i’m sure many of the people at his rallies are actual supporters, not paid actors, you get accused of being a donald trump supporter. uh, no, i just support the truth.

donald needs to protect what’s left of his hair

If I learned anything from Legally Blonde, it’s that you can’t have water in your hair 24 (or 48) hours after getting a perm. Donny seems like he gets a lot of perms.

It’s completely fake, just like the rest of him.

My first impression when seeing this picture (this is the first time I’ve seen it) is, “that’s a weird place to hold an umbrella”. I didn’t connect the Baron thing at all.

I agree. I think the left looks silly when they latch onto things like “herd mentality”. I don’t think Trump’s plan of relying on herd immunity to protect us from Covid is a good plan, but I do think that he understands the definitions of “herd mentality” and “herd immunity” and just made a silly mistake.

I said the same thing when Obama mentioned that he’d been to “57 states so far”. And I’ve been accused of being both an Obama supporter and a Trump supporter for saying those things when the truth is that I support neither, and voted against both two times each now. (Well, 4 times against Trump if you count the primaries.)

I have generally identified as a Republican my whole life and I would say that although this type of stuff is unappealing to you the Republican party has been using these gotcha moments to keep their low information base engaged for years. It would be interesting to see what the net impact on voting is by constantly taking the high road. I think it’s better to use your intellect to make them look stupid though. AOC and Mayor Pete are masters at this but they honed their wit by bartending and being smart and gay in the Army. Most politicians aren’t that fast on the draw.

oh yeah, both sides do it, but when the left does it, i get annoyed more cause they should be above such things. i’m still gonna vote for them though.

I still see people saying covfefe or writing tRump. It’s mortifying honestly to be associated with these dipshits

tRump needs to go away instantly. If you’re going to use covfefe it had better be extremely hilarious.

My last name is not that far removed from Covfefe. People still think it’s a funny a joke to call me Nerd Covfefe. It’s not really funny.

I rarely write his name on FB or other places because I don’t want to contribute to the algorithmic data for him on social media.

I refer to him as “IQ45”. I don’t care what anyone thinks about that.