My cat is lost. Or just doesn’t seem to want to come home or something. Which is ridiculous, because we’re talking about the world’s neediest cat-dog, whom actually gets in the way of other cats when they try to love on me, and has also been caught growling at the mailman from my lap. 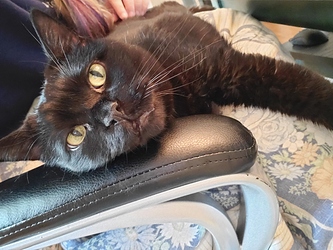 Jeeves has gotten out before. The last time he was back within a day after we decided to leave the garage door open and happened to catch him in there at about 2 AM. The time before that, he wasn’t my cat - but I’ve been told he was gone for over a month, and was not the first wild creature to be discovered in the cat trap.

We live in a fairly isolated community right now (good for quarantining), so we’ve put out the alert and tried all the standard cat catching techniques. Last Friday, we had two sightings - both in the same area, and both just far enough that we asked another community member if we could move our trap to their property (they were very kind folks). We had our target trapped within 2 hours. 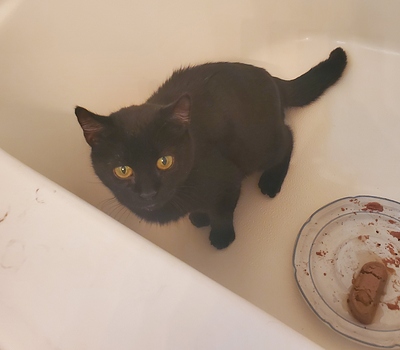 Here’s my other two for prosperity (Bert, Goobs): 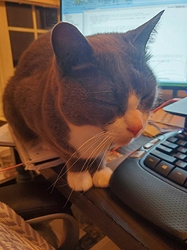 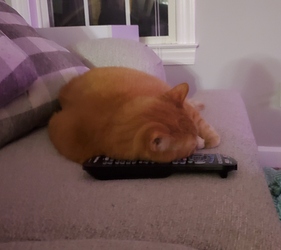 Did you keep the not my cat?

N.J. (Not Jeeves) is currently upstairs locked in the bathroom. She is FAF (feral as [CENSORED]) and prefers the company of her own feces to me.

I test tranquilized her yesterday, and I got one hand pretty close to touching her nose before she hissed at me, so that’s, progress?

She’s very cute - I wish we could keep her - but it’s looking like a case of TNR at this point.

So is there fear that if the door weren’t locked, the cat would operate the knob to release itself?

Actually, the fear was that the children would walk in on her, and end up like me (wondering if I’m going to die of rabies).

I taped a giant red X across the doorway that I duck under when I go in.

NJ is really cute, too bad also a demon cat.

So is there fear that if the door weren’t locked, the cat would operate the knob to release itself?

Given some cat stories I read on the AO, this is a distinct possibility.

Pro-tip: Do not bearhug your domestic cat immediately prior to entering the room with your feral cat.

A friend is making edibles with “special” butter. She went to the bathroom and her cat Barney was licking some of it. He needs to sleep it off now!!

I hope Jeeves makes it back. It happens sometimes. Before we got hitched, my spouse’s cat (who had outdoor privileges) disappeared for three months. She finally showed back up, with a fancy new collar.

This is why my cats only get to go outside under supervision (and they know it… they wait for me to say “ok, let’s go outside” before heading for the grass in our backyard). I could not handle the distress of having them go missing. I hope Jeeves comes home soon @Tiffany.

Yeah, me too. NJ isn’t getting any friendlier either.

Jeeves knows he’s not allowed out, but this was a case of the front door being left open all night.

Bert had already had his fun, so he came back as soon as we noticed the door was open and went out to call him. I think this was probably 5 AM or something similar - Jeeves wasn’t right outside my bedroom, as his usual m.o., so I knew immediately something was up when I woke up (mid-sleep).

Goobs was probably out just long enough to eat grass and have it ready for barfing on the carpet.

Aren’t there groups that spay feral cats to keep them from reproducing?

Yeah, but I didn’t expect her to be done already given her age - also I assumed a TNR would be ear-tipped. The more you know.

I assumed a TNR would be ear-tipped

I don’t know what that is. My dog has a green tattoo on her scar. I thought that was universal among animals.

They clip the tip of the cat’s ear when a feral cat is trapped, neutered, and returned. It prevents people like us from trying to catch them and do it again.

I’m amazed NJ isn’t ear tipped. All of our TNR’s have been, and most of the neighborhood strays are as well. The ones who are not don’t eat at our feeders. They either aren’t strays, or learned from the others.

There’s a couple lovebugs among the strays, and a couple very inquisitive ones, my spouse likes to leave the backdoor open for cold air, and we’ve got surveillance video of two different ones coming in to check out the house in the middle of the night.

Yeah me too - I would be a lot more confused if it wasn’t for the place we took her to saying that they weren’t going to tip her for us.

What are the chances she was once taken to the same place we took her? Probably better than her actually being somebody’s cat… she does NOT like humans (she peed & defecated off of my window sill in response to being scolded for growling at me).