Warm climate all year. Everything else they just carry around.

I’m more interested in why no lockers. I get it if they’re new schools and weren’t built with them, but if an older school, did they EVER have lockers and if so why were they removed?
OK, found this:
https://www.wikihow.com/Survive-a-School-with-No-Lockers#:~:text=Many%20schools%20are%20getting%20rid%20of%20lockers.&text=The%20main%20reason%20cited%20by,entire%20locker%20on%20your%20back. 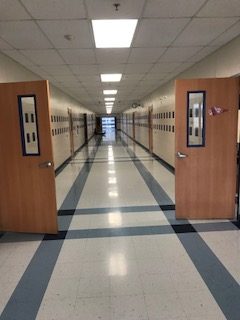 From pencils and notebooks to teachers and homework, certain objects represent integral parts of attending school. Another example of a school icon lies in the generic locker, one aspect of school obviously absent from DHS. Although the list of...

In my middle school there was a central area (near the main entrance) where all the lockers were placed. So, not in hallways, though that central area was a bit of a mess between classes. I merely took two classes’ worth of books with me, to cut down the number of trips back to the central area.

The school was built in the last 10 years (probably 5, I’m not entirely sure). It’s also a charter. A different “brand” of charter that I’ve been in also doesn’t have lockers. I’m not sure about the public schools.

Maybe not. Just my anecdotal experience of one area with recently constructed schools.

There does seem to be somewhat of a “trend” in other areas though: Schools and lockers: No longer the right combination

Old ones are disappearing, and new ones aren’t being installed.

I ran out of freebies at the WaPo.
I get that if you built a school (even long time ago) without considering lockers, then installed them as an afterthought, they’d mess with hallway flow.
My high school had lockers built into the walls of the hallways. Removing them without replacement wouldn’t affect the traffic too much.
No way I’d have wanted to carry every book and spiral with me. I’d leave them some of them at home. Not sure they had rolling suitcases back then, but I’d probably have something like that if they did.
So, every kid with a huge backpack or rolling suitcase walking from class to class. Seems like the same amount of traffic-jamming to me as every kid takes up twice as much space.
Are administrators that leery of kids storing contraband in their lockers?

Personally - I like the idea of lockers. It seems like it would have been very annoying not to have one in high school.

From my limited time in the schools - I’m haven’t noticed especially large backpacks. Probably due to that whole “no textbooks” thing.

Well, without textbooks, yeah, lockers probably don’t need to be a thing.
I’d go so far as to posit that one laptop is all any student needs: textbooks and note-taking all in one.

I assume gym clothes still go in gym lockers. @soyleche do you know if the school still has PE lockers?

I don’t know about how he does gym clothes. I’ll ask him later if I remember.

I asked. They don’t have gym lockers. Just carry the clothes with them.

It should be noted that his school is on an A/B day schedule, so they only need to carry stuff for half of their classes around on any given day (he actually keeps 2 backpacks, one for each day, so he doesn’t have to switch them out).

The other school I’m familiar with is not on that schedule, though. I have no idea what their gym situation is like.