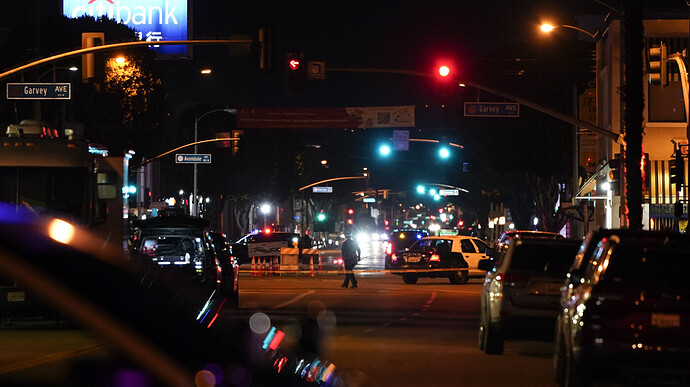 Ten people were killed and 10 others wounded in a mass shooting, police said. The incident took place after one of Southern California's largest Lunar New Year street festivals.

The attack occurred at the end of the first day of a two-day street festival to celebrate Lunar New Year. The event, which began on the eve of Lunar New Year, is one of the largest free street fairs in Southern California, typically drawing crowds of over 100,000 visitors and over a hundred food vendors, performances and merchants.

The shooting was at a dance studio. No one has been arrested. A suspect was seen fleeing.

Suspect was found, dead from a self-inflicted gunshot wound.

suspect was chased down, and shot himself after he was surrounded by cops. At least, that’s what it looked like from the overhead photo I saw of his white van surrounded by 3 large police vehicles.

Sounds like he went into another ballroom with a gun and those people wrestled it away from him before he got to shoot. Sounds like a hate crime to me going to two Asian ballrooms during New Year celebrations

Although the shooter was also Asian, so maybe he resented those venues, or maybe he just randomly snapped

He was a long time user of that first venue, meeting his ex wife there decades ago (they divorced in 2005) and informally teaching classes there. Not sure the exact motive but I think it meant something to him and wasn’t just a random place.

Yeah, if he just snapped he may have decided to go to places he was familiar with.