Stocks go up, up, up, and then down some, and then up some more

I’ve been thinking similarly, Klaymen. I’m not as attuned to market metrics as you (though I comprehend your post). I started investing less than a decade ago and I’ve pretty consistently been >10% return each year. It makes me nervous, this can’t continue.

I’m not THAT attuned to the market, but I do check out a few sites and stumbled across this and it was like WOW. I was trying to figure out how to invest a chunk of money and I started looking at P/E and Price/Book metrics and I was thinking maybe I should put $$ in Europe - the numbers there look less inflated - but rather a portion (maybe 1/4-1/3) is now just sitting on the sidelines. I think a little bad news right now could easily cause a -10% or -20% (or more) correction.

my mom just made me notice SQ went up 200% over the past year.

I had this for a long time before I sold everything 4 years ago T.T

Apparently SQ is heavily invested in bitcoin or something

how much of that current PE ratio is an anomaly due to covid? We saw companies drop earnings as the economy effectively froze, but then saw a rebound in prices during the FOMO push in anticipation of earnings recovery. So really the crazy PE ratio is from a deflated denominator; we could see PE come back down in a hurry in 2021 if earnings recover (maybe throw in a small price drop as well)

I do agree the market is tiny nudge from a correction. any time the market makes a run like this everyone starts getting panicky and it becomes a self fulfilling prophecy.

I made a little money off SQ a few years back, and sold what little I had today.

stocks seem to finally gotten cold feet today. That was quite a run.

Don’t know what you’re implying, GME to the moon!

looks like they shut down GME to retail investors.

Guess thats the end of that.

Guess thats the end of that.

Well, they’re more than likely to get sued. You can’t force people to only sell and not buy.

this had class action written all over it. But in the short term the big firms were able to stop the bleeding.

Pretty big BS for retail investors. Free market until the peasants get too much control.

Pretty big BS for retail investors. Free market until the peasants get too much control.

Yeah… brokers only allow selling and the price drops.

I wonder if this will backfire. I’m far from some AOC person but these sort of things just shout underregulated.

yup. massive backlash at RH forced them to resume trading. gme/bb/nok/amc all back in play.

did anyone double their investment today?

This is the way.

I am too old to be stressing on a single stock’s price all day.

I often say to people that are getting into sports betting: ‘every bet you dont make is a good bet’. 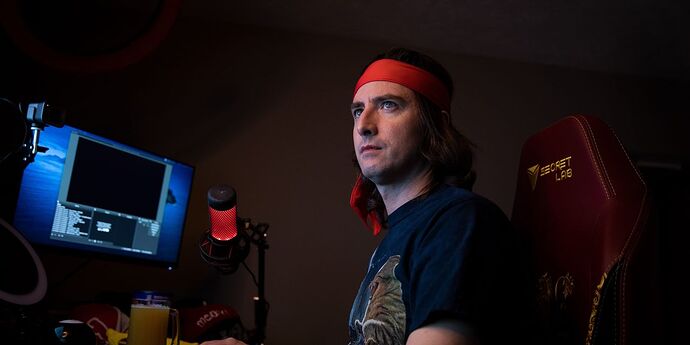 Trader known as DeepF—ingValue on the WallStreetBets forum and “Roaring Kitty” on YouTube, helped turn the investing world upside down. “I didn’t expect this.”

Does anyone here work at Massachusetts Mutual Life Insurance Co? Does anyone know/remember Keith Gill from marketing?

Fox News with the spin that this is Biden, and liberal elites taking advantage of down home retail investors.

I just got schooled on reddit over this. I suggested that by cashing out now you were guaranteeing your earnings. Holding, and you’re risking it all - for what? The hedgefunds already learned their lesson, so what’s most probably going to happen is the stock goes into freefall too quickly for someone to react, and you lose everyting.

That got a lot of people excited and posting low-iq responses. Like ‘they called DFV crazy last year’. Yeah, that’s not a justification.

Yeah, that’s not a justification.

I think the biggest reason to hold is that it’s not obvious the hedge funds have covered their shorts yet, regardless of what CNBC reports. If they haven’t covered their shorts that could be a big reason to think it’ll be forced higher in future, as long as the small retail people don’t crack in the meantime.