Heading to Seattle area soon. Anyone want to hook up, platonically? I’ll have my wife with me, and she’s way more interesting than I. That’s why i bring her.

Of course it is!

I used to say that Seattle has 5 weeks of summer. The last week of May, the last two weeks of July, and the first two weeks of August. (Note the non-consecutivity.) My parents were astonished that I always needed to have the heat going over 4th of July. They’d switched from heat to air conditioning months earlier.

I’m not sure if that’s true anymore with climate change, but it certainly used to be true. Anyway, you are there during not-summer, so obviously it is raining!

(Seattle also has two seasons: summer and not-summer. Or if you prefer: not-rainy and rainy.)

I recommend checking out the Chittenden Locks and salmon bridge in Ballard. It’s fun to see all the boats and watch the salmon jumping. Bonus is it’s free, although donations are suggested.

You can visit the Fremont troll on the same excursion. (Also free.)

Is that the troll under a bridge? I saw that on a trip to Seattle.

Yes! It’s under the Aurora Bridge. (And it’s the Fremont Troll… I’d mislabeled it the Ballard Troll originally, but that’s wrong. The locks are in Ballard. The troll is in nearby Fremont.) 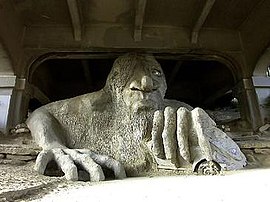 The Fremont Troll (also known as The Troll, or the Troll Under the Bridge) is a public sculpture in the Fremont neighborhood of Seattle, Washington in the United States. The Troll is a mixed media colossal statue, located on N. 36th Street at Troll Avenue N., under the north end of the George Washington Memorial Bridge (also known as the Aurora Bridge). It is clutching an actual Volkswagen Beetle, as if it had just swiped it from the roadway above. The vehicle has a California license plate. Ori...

And for completeness, here’s the Wikipedia page about the locks. 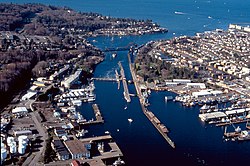 The Hiram M. Chittenden Locks, or Ballard Locks, is a complex of locks at the west end of Salmon Bay, in Seattle, Washington's Lake Washington Ship Canal, between the neighborhoods of Ballard to the north and Magnolia to the south.: 2 : 6  The Ballard Locks carry more boat traffic than any other lock in the US, and the Locks, along with the fish ladder and the surrounding Carl S. English Jr. Botanical Gardens attract more than one million visitors annually, making it one of Seattle's top touri...

Happy to spend an afternoon showing your wife around.

The annual Canadian invasion of Seattle is later this week as thousands of Jays fans take over the Mariners’ ballpark. Bad time to visit price wise as the Seattle hotels jack up their prices to fleece the Vancouverites. However the actual games are a hoot.

Hopefully summer will have arrived by the time of your visit. Haven’t seen it yet this year in this part of the world.

To be fair, this time last Summer, it was 100+ in the Seattle area. This year has been especially mild. I can confirm that my thermostat was still in heat mode well into June.

On Saturday the 9th, I’ll be going to the Sounders game in the afternoon, have a few hours to kill, then the Mariners game in the evening. I’ll buy y’all a round of beers if you’re in the area around 3:30ish - 6:30.

(Puget) Sounds great, but I’ll be on an island on Saturday.
We’re not actually staying in Seattle at all. North of it on the weekend, South of it after that. But we do have to drive through it twice. We’ve been several times before.

I enjoy Seattle. Alas I won’t be there to hang out with your wife.

Well, honk on your way though, I’ll make sure to wave.

swing by for drugs

I’ll be on an island on Saturday.
We’re not actually staying in Seattle at all. North of it on the weekend

We usually stick to the Canadian islands but folks tell me Whidbey Island is both lovely and interesting. Just don’t expect hot weather. That was 2021 weather.

Coldest winter I ever spent was summer in the Olympic Peninsula.

We are going to be very close to Canada. But the ferries are not running to Victoria.

Great, that is our south-of-Seattle destination!

We just got back to Seattle from Olympic peninsula. If you are planning on following our whole trip you’ll have to drive up to North Cascades and then over to Rainier, then swing by Mt. St. Helens on the way home.