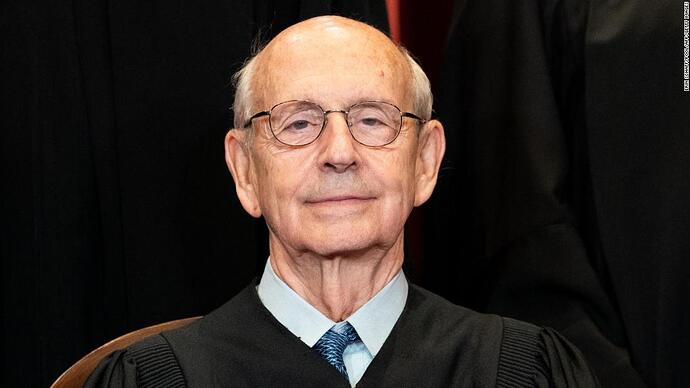 Supreme Court Justice Stephen Breyer plans to retire, setting up a seismic confirmation battle at the start of a midterm election year as President Joe Biden tries to find his footing with his agenda stalled and Democrats divided in Congress.

Manchin maybe, but Sinema is strong on abortion and LGBT rights.

They killed BBB and Voting Rights but with a 6-3 super majority on the SC already that isn’t going to change with this pick I can see them throwing a bone and not opposing.

This is the thinking of a sane human. The Republican party is no longer sane. They will never cede this opportunity to claim power.

Presuming the party can get Manchin and Sienema on board, the Democrats can ram through whoever they want. If they choose someone appointed in 2021 that even a smattering of Republicans voted for, it’ll be interesting to see how many of them flip their votes and speak out against.

Manchin maybe, but Sinema is strong on abortion and LGBT rights.

This seems to imply Manchin and Sinema are taking their political stances based on strong principles. Seems to me it’s a money grab. They’ve been raking in donations since becoming an obstacle for Biden.

I find the edict to nominate a black woman to the Court to be racist/sexist. Unless it’s Kim Kardashian (well, not exactly black), who will be vetoed and Biden will still live up to his pledge.

I understand that there is a pool of qualified candidates that could include a black woman. But I disagree with making a decision based on the color of one’s skin. While Biden’s “diverse” appointments to his cabinet were likely qualified, I don’t like his continued virtue signaling.

I think we can skip over the white men occasionally.

I don’t disagree. But I’d rather see Biden nominate his strongest person, and defend his selection based on merit instead of him begging the question of his nominee being qualified.

Unless it’s Kim Kardashian (well, not exactly black), who will be vetoed and Biden will still live up to his pledge.

I absolutely would up vote Kim K as a supreme court justice.

But one of the things he campaigned on was nominating a Black Woman to the SCOTUS if elected.

How about an asian for a change? We know there are many qualified asian candidates.

Sure, but he didn’t campaign on that.

to be fair, I don’t thing people voted for Biden based on what he campaigned on.

This reminds me of a friend of mine in elementary school.
Teacher: “What do you want to be when you grow up?”
Student: “I want to be the first woman on the Supreme Court.”

Shortly thereafter, O’Connor was seated on the Court. I thought of my friend right away. I thought that this would be disappointing to her in some way, as she could no longer be the first. Until now, I never had any thought that my school friend could still be the first black woman to serve on the SC. These adjectives strip away the individuality of the person.

Some did. And some are a kind of upset he hasn’t fulfilled his campaign promises. Nevermind he’s got 2 in his own party obstructing his agenda and well damn near every Republican in both chambers. Oh and a Supreme Court than likes to legislate from the bench.

Not sure what your point is. Of course there can only be “One first” the fact that some of these firsts have taken more than 230 years to happen is the problem.

Do you think Clarence Thomas was the strongest candidate that Bush Sr. could have nominated?

That is frightening to think.