According to Barnor Hesse, an Associate Professor at Northwestern University, there are 8 categories of “whiteness”. Below is the scale showing his 8 classes. For the actuaries to which it applies, please take a moment to reflect on your own “whiteness” and find where you belong on this particular scale.

The 8 White Identities, by Barnor Hesse. 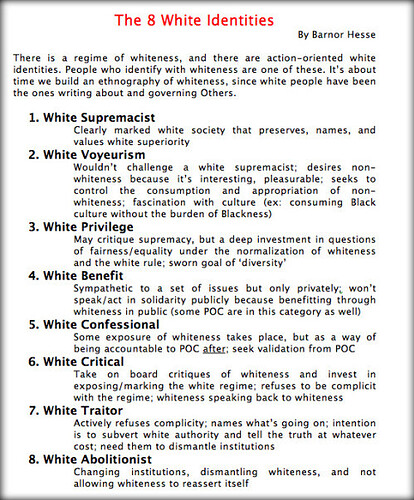 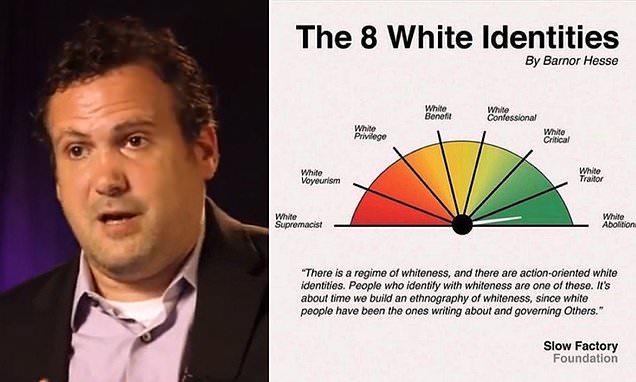 Principal sent parents pamphlet asking them to rate their 'whiteness'

Interesting fact about the school “The racial makeup of the student body at East Side Community was 55 percent Hispanic, 18 percent White, 15 percent Black, 10 percent Asian and 2 percent other during the last school year.”

But there are white and black Hispanics

seriously, just looks like a lot of buzzwords tied together.

If I had to guess what hes going for, put in around a 4.

Due to the multiple instances, the inconsistency doesn’t appear to be a typo, but rather is intended.

My brother recently was suggesting to me that “individualism” is “white supremacy culture” and was arguing with his school system about whether to teach it. I thought this was pretty nuts and told him so. He kind of half-agreed on second thought.

It was surprising, anyhow, because I generally understand and completely agree with him on everything.

I’m not sure what the point of this thread is, but if it’s supposed to be “are some people taking anti-racism too far?” then I concur. (Or maybe I just need to learn more about it.)

same. was confused. how do i vote if i’m black?

Regarding Black with an upper case B, that is definitely an up and coming editorial choice. I saw a Coleman Hughes video in which he was asked about it. He thought it better to either capitalize both black and white or neither. The idea seems to be that Black is referring to a heritage rather than just a color. So Asian, Latino, Black. I’ve had some of my writing for work corrected this way by our media unit. I just shrugged it off.

That sounds good to me. Either capitalize both or neither. Consistency is good. I can easily see Black or POC referring to something beyond just skin color, to a common heritage, similar to White referring to something beyond skin color. Capitalize both or neither. However in the case, the writer didn’t make one of those two choices. It appears the writer made a conscious decision to do just the opposite.

My first thought when I saw the OP was that this could lead to “Yo’ Mamma” jokes. Welcome back, 1993.

similar to White referring to something beyond skin color.

but we all know white people have no culture

The “consuming Black culture without the burden of Blackness” is weird to me.

I enjoy listening to music by a number of black artists. I like my father-in-law’s collard greens. I proudly display in my home some African art that I purchased when I was in Africa.

There’s probably plenty more examples of me “consuming black culture” if I thought about it for more than the 15 seconds of thought I put into it already. And as a pasty white chick I certainly don’t have the “burden of Blackness”.

But that’s in the second most racist category. So… I would be considered less racist if I refused to listen to Alicia Keys or The Jackson Five because they are black and turned up my nose at the food my black father-in-law serves me when I visit my in-laws???

Am I thinking about this wrong or is that part especially nuts?

The whole thing is nuts. I can’t figure out much rhyme or reason to hardly any of it.

This is the type of person who thinks that math teaching methods are racist because they stress showing work and getting the single correct answer.

(Although I will admit that for simple problems showing work is silly if you always get them right.)

math teaching methods are racist because they stress showing work and getting the single correct answer. 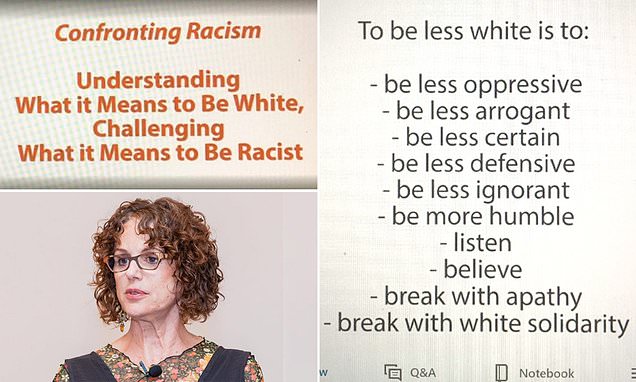 The slides in question, which were revealed by a 'whistleblower' working for Coca-Cola in the US, told viewers that being 'less white' meant being 'less oppressive', 'less arrogant' and 'less ignorant.

didnt the AO used to have a thread called “i want to be outraged!” or something along those lines?