is it wrong that i don’t really give a shit that the queen died? will all of great britain and america care when i die? NO! so why should i care that she died? 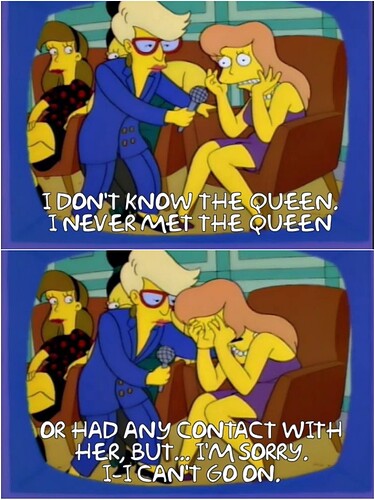 I was a bit surprised to see flags at half staff and upon googling why, it said it was in remembrance of Queen Elizabeth II.

I was a bit surprised seeing as we defeated them and all.

but i agree with campbell that she did have some cool hats.

people get OBSESSED with the royal family, their every move. Britain is worse than the US in this regard. It’s insane, vilifying meghan markle and prince harry and making the queen out to be some saint. they were born into this royal family nonsense and as a result they have these 2 countries obsessed with them.

Don’t get me wrong though, the other side was also bad. Either way, the bad guys would have won.

Yeah I’d have some cool hats too if I subjugated a country with a billion people.

what does this have to do with world war II? Also, nazis are bad.

I was a bit surprised to see flags at half staff

I’m not sure about subsequent POTUS deaths, but I believe QEII had flags flown at half staff when JFK died. Since JFK we’ve had the deaths of Hoover, LBJ (only POTUS during her reign that QEII never met, I believe), Eisenhower, Truman, Nixon, Ford, Reagan, and Bush Sr… not sure if she had the flags flown at half staff for any of them, but certainly if she did then it seems like we ought to reciprocate.

We haven’t been at war with England since 1815, and they’ve been an important ally the last 100 years or so. Seems reasonable enough to honor each other’s heads of state.

Also I’m not sure if the death of the current head of state vs former would make a difference.

I’d rather doubt we flew flags at half-staff for the Duke of Windsor… the only former head of state for UK to die in the last century or more.

So maybe JFK is unique in that he was our only current head of state to die during her reign… the previous being FDR during her father’s reign.

The good guys won WWII. WWI is more up-in-the-air on which side was “good” and “bad” (really, neither was all that good).

People don’t realize the bad guys won WWII. It was basically a validation of brutal colonialism.

I would call Japan’s take colonialism as well, so, I’m not sure how you’re saying the allies were worse in the Pacific front.

And, for Europe, Stalin was bad I agree. Hitler though had the whole holocaust thing.

So in summary you’re abjectly wrong in making that statement.

I didn’t imply that, you didn’t read the post I made after that, both sides were very bad. Especially Canada within the context of the allies.

She represented the British Empire, one of the most brutal regimes in the history of mankind.

both sides were very

The Nazis were worse.

Japan’s actions in China were worse.

And probably hundreds of millions more would’ve been murdered through enthnic cleansing because it was an explicit part of nazi ideology.

The nazis are worse.

I’m not shocked you don’t understand this though, and I’m not wasting any more time with you.

Also to be clear, I don’t love the British monarchy, and agree Britain did a lot of shitty things throughout history, my objection is to both siding WW2.

Posting from another thread as fitting here.

I’m not sure I agree with the quote in the first place. We all benefit from our ancestry to varying degrees.

But I also think it’s worth noting that he was an Irish Republican… a group with whom Elizabeth II made peace during her reign.

Fair, I didn’t know the context, but like the sentiment. If you’re going to claim enormous wealth power and privilege exclusively due to hereditary privilege, you have some onus to own up to the past.

If you renounce some of that (like the dude who abdicated), then you can say the past isn’t your problem.