Puerto Rico in, West Virginia out

Since West Virginia is impoverished, with its main industry, coal mining, to be phased out in the near future, I propose we resettle the entire population of WV elsewhere and turn the whole state into some kind of nature preserve, because it is quite beautiful. It should then be disbanded as a state and then reabsorbed into Virginia, re-uniting the two states since the Civil War.

To keep the # of states at 50 so we don’t have to replace millions of flags, I also propose that we turn Puerto Rico into a state.

If we are going to consolidate states, I’d start with Wydahotana. Then put the Dakotas together, and probably throw in Nebraska.

It has been pointed out to me, though - that consolidating states (without their consent) won’t pass muster constitutionally (Article V).

Let’s shrink the number of states down so they all have roughly the same population and the US Senate isn’t so skewed by fly-over country.

Most of that should have been done in the late 1700s. Then maybe we could have skipped over a lot of the “big state v small state” crap.

That’ll just piss people off. We should instead have a single house parliamentary system. If North Dakota wants ever so slightly different local laws than South Dakota then good for them, but we shouldn’t distort Federal policy as a result.

Let’s shrink the number of states down so they all have roughly the same population and the US Senate isn’t so skewed by fly-over country.

Like I said, though - that plan is disallowed by the constitution. We could split states until they are all roughly equal in population. That might skew fly-over country even more though…

lol. each block of NYC will be a state.

I object to this, because I’d rather one political party have all the power, even for a moment.

lol. each block of NYC will be a state.

The population of NYC is about 8.3M, so if we wanted to normalize the population of states to approximate that of the small ones, it would be about 12 states all by itself, plus the rest of New York State (population 19.5M - 8.3M = 11.2M) would be perhaps another 16 states.

List of states and territories of the United States by population 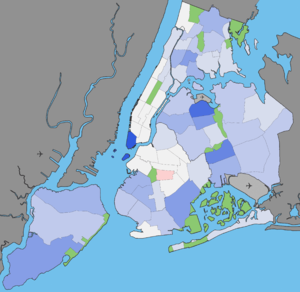 New York City's demographics show that it is a large and ethnically diverse metropolis. It is the largest city in the United States with a long history of international immigration. New York City was home to over 8.3 million people in 2019, accounting for over 40% of the population of New York State and a slightly lower percentage of the New York metropolitan area, home to approximately 23.6 million. Over the last decade the city has been growing faster than the region. The New York region Thr...

I wonder how many states we’d get if we let each existing state break itself up into smaller states, under the condition that each of the resulting states has at least 1 million people. I could imagine much of NY state wanting to break away from NYC, but I don’t see NYC residents wanting to split themselves into more than one state.

Note that Californians consistently turn down plans to break their 39 million people into more than one state.

Finally we’d be able to kick out South Jersey