Hard fact: Six feet is not enough when indoors.

Nordic Institute for Theoretical Physics scientist Dhrubaditya Mitra and his team realized they could use the mathematical equations that govern perfume to calculate how long it would take for viral droplets to reach you indoors. It turns out: not very long at all.

Perfume worn by someone at the next table or cubicle reaches your nose thanks to turbulence in the air. Fine droplets spewed by an infected person spread in the same way. The researchers found that below a relative distance known as the integral scale, droplets move ballistically and very fast.

Even above the integral scale, there is danger. Consider an example where the integral scale is two meters. If you were standing three meters — just under ten feet — from an infected person, their droplets would almost certainly reach you in about a minute.

“It showed us how futile most social distancing rules are once we are indoors,” said Mitra, who conducted the research with colleague Akshay Bhatnagar at the Nordic Institute for Theoretical Physics and Akhilesh Kumar Verma and Rahul Pandit at the Indian Institute of Science.

Research in the 1930s analyzed how long respiratory droplets survive before evaporating or hitting the ground. The nearly century-old findings form the basis of our current mantra to “stay six feet away” from others.

The “six feet” thing was based on the idea of was carried by larger droplets, that fall to the ground fairly quickly. I find it very frustrating that it persists now that we know it’s mostly carried by much smaller aerosols.

That’s also why it took the WHO so damn long to admit it is aerosol. Because that means more expensive measures are needed to protect people, and they didn’t want to impose that burden on poor countries.

The WHO also promulgated the idea early on that we should only test people with a link to China or a known case. An idea which facilitated completely unmonitored spread.

The WHO has really done more harm than good so far. It looks like their vaccine distribution plan (for poor nations) may actually be helpful. But they have a LOT of ground to make up.

One thing I find kind of interesting: it is well known that in two dimensions, the density of shooting particles decreases inversely with distance while in 3 dimensions it decreases inversely with the distance squared. In other words, 1/r vs 1/r^2. This all by itself implies that you get a lot more droplets indoors, assuming that the ceiling isn’t too high relative to the distance the droplets go. Although if I’m honest, that model is probably way too crude to really mean anything here.

So… Where your exposure comes from depends on what you do.

I don’t know if i care what fraction of people who have been infected caught it which way. I just want to know how risky it is for me to sit with my mom in her living room.

The answer seems to be, “if she is infected, it’s very risky indeed.” Because a lot of the early preventive measures were designed around larger droplets, a lot of the early failures to contain it were from aerosols. I just read a really depressing article about how some hospital in Italy infected the whole town – that was mostly not people coughing on each other, it was sick people without real barriers.

To your example of being exposed to only smaller aerosols: I think the question then is whether 15 minutes of those aerosols is enough? And is the viral load enough to make you really sick, since viral load seems to matter?

My take on it is that it simply isn’t safe for you to be indoors with your mother at all unless things are so well ventilated that you effectively are outside, or you are both wearing well fit N95s. Which is pretty lame. But this is partially because she is, I am assuming, old enough to be high risk if she gets it.

But I am also looking for any information about how well these masks might reduce the spread, (even though my knowing that will accomplish or change absolutely nothing). If you had read that it was extremely virulent in small particles then i was curious about that. But this doesn’t necessarily seem to be the case, I don’t think? If you are doing certain medical procedures then it seems like you really want an N95, but otherwise these cloth masks seem to work OK.

That’s the other reason the size of the aerosols matter. If most of the time most of us will only get it from large droplets then I should have pretty good protection if only I am wearing a mask. But if it’s small aerosols then everybody needs to be wearing a mask (unless I have an N95). Or so I have been told.

At the advice of my doctor, my household quarantined completely for 2 weeks prior to Thanksgiving. That ought to be more effective than wearing an n95 mask. (assuming no one gets sick during those 2 weeks.) For various health-related reasons, she is not currently able to quarantine, so we have a short, mostly-masked visit.

The evidence shows that if everyone wears a surgical mask, that provides decent protection. I cite that Mass General Hospital managed to maintain an adequate supply of masks, and required everyone in the building to wear one, and despite treating a lot of covid patients and seeing a lot of the general public, staff at the MGH had consistently lower infection rates than the Massachusetts public at large.

Of course, surgical masks are designed to prevent your breath from infecting others, not to protect you. So they may only work if everyone is wearing one. I saw some study out of Denmark that showed an extremely minor benefit (not statistically significant) to those who were encouraged to wear facemasks. (the intervention in that study was to provide masks to half the participants and encourage that half to wear them.)

The changes as they figure this stuff out is a bit exhausting. I’ve pretty much decided that it’s a matter or risks instead of absolutes, so we’re just careful as we can be and that’s the best we’re going to do. We wear masks, we don’t go out much, we social distance, rarely have anyone over, wash hands every time we go in our out of the house, etc. Beyond that, I can’t get the energy up to think about what happens if someone is 10 feet instead of 6 feet.

So the company that services our furnace is offering to sell us a gizmo that somehow ionizes the air and will kill virus particles in the air. If we spend $975, any virus that gets inside our house will be killed right away. We can safely have people over and as long as they’re 1.5 feet apart, they won’t get sick because the virus will be killed by this ionized air. Or so they say.

I mean, if that was true it would certainly be worth $975. But I’m skeptical about their claims.

It’s not using ozone, is it? 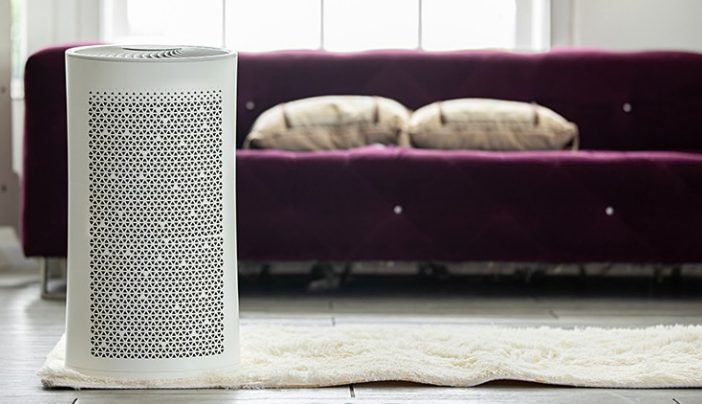 Can air purifiers protect you from COVID-19?

Wondering if you should get an air purifier to protect your household from the coronavirus (COVID-19)? Read what Tim Peglow, MD Anderson's assistant vice president of Patient Care and Patient Facilities, has to say first.

You can buy a portable HEPA filter and park it between you and your guests. It will probably reduce the viral spread between the two of you enough to matter.

I’ve heard of gizmos that suck air into a space (like above the false ceiling in a restaurant) and and subject it to UV light, with something opaque to protect YOU from the UV light. UV is very effective at killing covid (and flu) viruses if you hit it with enough watts. Or lumens, or whatever the right unit is. Such devices, also, should reduce the amount of virus in the air.

I don’t think you can make the air you breath toxic to the virus without also making it bad for your lungs, however.

Air cleaners that utilize ionizers and electrostatic precipitators are other types of devices that emit ozone, but do so as a by-product of their design and function. These devices are designed to electrically charge particles in the air and cause them to attach to surfaces in the room, such as walls or floors. Ozone is released through the charging process, although these devices typically emit much less ozone than ozone generators.

We already have an electrostatic air cleaner on the furnace. But I guess the ionizer is different from the electrostatic thing somehow???

Seems like something you don’t need to buy without a lot of research.

Also, you’ve gone nine months during the pandemic without it. Your other precautions are keeping you safe enough.

All true, but I haven’t been through a winter during the pandemic. I’m expecting things to get worse before they get better.

I don’t think you can make the air you breath toxic to the virus without also making it bad for your lungs, however.

Well that’s why I was skeptical of the HVAC guy’s claims that the ionized air would kill the virus as people exhale it.

Doesn’t sound like it’s one of those ozone generators though.

We already have an electrostatic air cleaner on the furnace.

If it generates enough ions, it might make the virus stick to things faster, so you are less likely to breath it. But if there were a panacea that made it safe to invite guests over, every restaurant, theater, church, and bar would have it.

If it sounds too good to be true, it probably is.

All true, but I haven’t been through a winter during the pandemic. I’m expecting things to get worse before they get better.

Yup. Frequency of people who carry it is up. We’ve been lucky so far, but I’m really worried about the next couple of months.

I bought a couple of portable HEPA filters for my mom – she needs to have people in her apartment all the time for medical reasons. They all wear masks, but some of them aren’t really good at wearing masks, and masks are imperfect. I’m considering picking up one or two for us, too.