Just look at sum of my passed threads/posts. Their are prolly alot out they’re.

Don’t they normally finish off beef with corn? Corn is still a vegetable, right?

On the cob or creamed and such I’d be willing to consider it a vegetable. In bread I’d call it a grain.

What the cows eat I’d call closer to “grain”. And it’s not really their “natural” food.

If I had a small farm I imagine I’d feed the cows grain and forage, and the pigs would get leftover vegetables and such.

There’s not a clear line between these things though. 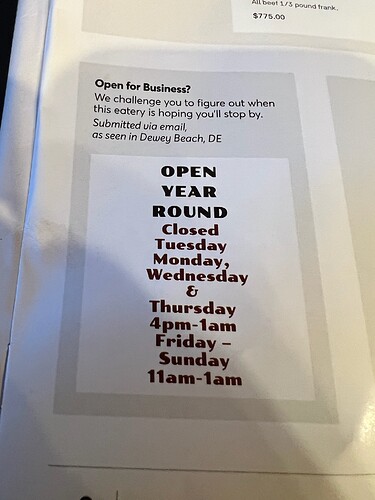 what do you want to order?

the days of the week

I think Twig is probably correct. All they would need to do is move the ‘closed Tuesday’ to the bottom and it would be pretty clear imo

Or a period after Tuesday and a comma after the first 1AM.

I’m sure @twig93 is correct, but I thought the sign was fairly obvious, but fit the thread quite nicely.

Did anyone really not understand the sign after reading it a second time? I mean without the correct punctuation, it was easily misunderstood initially. But after reviewing it seemed pretty obvious, didn’t it? I just assumed twig was being twig.

Here’s a couple of choice specials from the menu board of a restaurant I was in last night:

That’s a lot of errors!

I’m looking at a banner with an it’s / its error.