Over 1000 children’s corpses have been found over the last few months at Canadian residential schools, which were schools where the government and/or Catholic church stole Indigenous children from their family and abused them. Both countries and the Church have so much to account for. 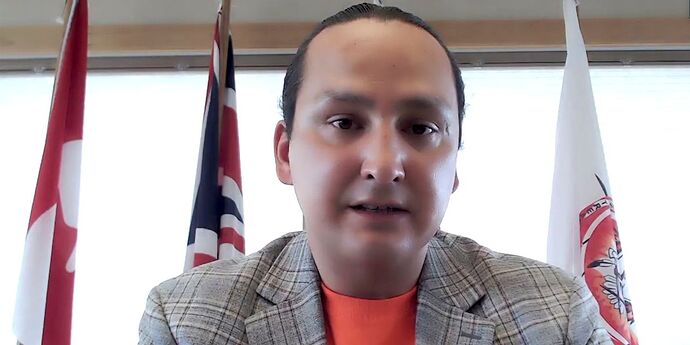 The discovery near a former school by the Cowessess First Nation came weeks after a similar discovery at another school set off a nationwide discussion about Canada’s treatment of indigenous people.

It really is. Including the one in Carlisle, PA, they are at over 1300 bodies in 6 locations, and there were something like 500-600 of these between the two countries. It’s unspeakably awful.

The last residential school closed in 1996.

And they literally kidnapped children forcibly to take them there. The stated goals was to “kill the Indian in the child”. This is just the tip of the iceberg. There were a lot of those schools, and i bet the rest have a lot of dead kids, too.

A Mississauga, Ont., priest is under fire after a sermon referencing the “good done” by the Roman Catholic Church in residential schools, saying some might go so far as to even thank it.

During his sermon at the Merciful Redeemer Parish last Sunday, Monsignor Owen Keenan referenced the Kamloops, B.C., residential school where the Tk’emlúps te Secwépemc First Nation reported it had discovered the preliminary remains of more than 200 children in unmarked graves in May

“Two-thirds of the country is blaming the church, which we love, for the tragedies that occurred there,” he said on a video originally posted to the church’s YouTube page but since deleted. Clips of his sermon continue to circulate on social media.

“I presume the same number would thank the church for the good done in those schools, but of course, that question was never asked and we are not allowed to even say that good was done there. I await to see what comes to my inbox.”

This is often repeated, but is misleading. The government took them over from the churches and shut almost all of them down by about 1970’ish. Ifthe point is that this was a string of large scale horrifics unabated until the late 90’s, that’s not the case. There were stragglers until 96, but a more correct version would be that they were shut down in the early 70’s.

Im only part way through the truth and reconciliation reports, it’s exhausting and dense material. But I’m getting a clear picture that the residential schools were both more complex AND much worse than the media would have you believe. They weren’t schools. They were forced labour prison camps.

Kidnapped, yup. And if the parents got unruly, they withheld food to the parents.

Two-thirds of the country is blaming the church

Two thirds is short by about a third. The churches were the boots on the ground in all this.

And now the churches are refusing to allow access to their records.

It wasn’t just the Catholic church. Some other churches ran some of the schools, too. And the whole thing was set up by the Canadian government.

But it seems to be the Catholic church that is still trying to cover it up.

This is often repeated, but is misleading

I mean, it’s factual right, the last of the schools weren’t closed until the 90s.

I take the point they weren’t quite as bad by then, but to me it shows how hesitant we’ve been to accept how horrible the system was.

this is something I expected from a country like China, not sweet sweet Canada

The general population was unaware of even the existence of residential schools up until recently. IT’s been buried under beauracracy at the federal level.

What we now have is discord amongst canadians. We’re eating ourselves, anyone with a differing viewpoint on a solution gets screamed at as racist or called an angry white man. There’s a lot of ‘canadians need to wake up’. But Canadians are now awake. They’re united in wanting a solution and resolution, but I don’t think people see that yet. Eventually we need to focus on the federal gov’t and the churches both of whom are doing absolutely nothing right now. The gov’t is supposed to represent the people, but it very much does not right now. We need something that’s borderline a revolution and if Canadians ever refocus their anger from each other to the feds, we may very well get it.

As long as the Department of Indian Affairs exists, the indigenous population will continue to suffer at the hands of the government as a result of bureaucracy and ineptitude. Many reservations are no more than a ghetto in the desert. I think it is time to set the natives free so they can move onto places with more economic opportunities. If they choose to stay on reservation land, that is fine but don’t tempt them with any incentive to stick around a poverty stricken town. Maybe things are better in Canada, but things are kind of bleak for reservation dwelling natives in America.

If reservations didn’t exist then neither would residential schools.

Knowing what we know now, I think presidents and generals of the past would have ordered all conquered natives be killed. The economic outlay to survivors for the injustice they endured has come with an astronomical price tag, this perpetual cost will haunt the country for an eternity until the wrongs are righted.

It is time to cauterize the wound. Americans paid one time reparations to the surviving interred Japanese. Compensate the surviving natives with a one time payment and be done with it.

Many reservations in Canada, particularly the north, have developing world conditions. I don’t think that’s easy to fix, but it’s necessary.

Yep. It’s going to hurt but it needs to be done. But it’s complicated in Canada because we also have 200+ year old land treaties in various states of confusion. Parts of major metropolis’ control is unclear.

I think it is time to set the natives free so they can move onto places with more economic opportunities.

I have little to no knowledge of how this whole system works.

Our local community has been tearing itself apart over indigenious issues (including our local council) for over a year now, long before the mass graves were publicised. I’m honestly getting exhausted and burnt out emotionally over it. I need a break from thinking about it.

Did the indigenous parents get to take break worrying about their missing kids after the government and/or church stole them?

Nope. And they weren’t even told when their kids died, and were buried on-site at the schools. That’s part of the horror of all this. The kids were stolen, many of them were killed, and they didn’t even tell the parents what happened to their children.

And I just have to say, it’s incredibly creepy that “residential schools” had their own graveyards at all. Have you ever heard of other schools that buried the kids who died there? I mean, kids have always died at school. More in the past then now. And fewer at decent schools than at these abusive schools, of course. But “kids die in school” was a thing for every school. But at normal schools, when a kid dies they tell the parents, who bury their own children.

Like, you know just from “they buried a lot of kids here, and didn’t keep records” that there was a contemporary cover-up of the abuses.