My sons started really playing with the summer nanny this year, and I guess I caught the bug a little bit. They’ve constructed some Modern decks, while I’m attracted to the cyclical nature of Standard. Which means I’m generally going to lose against them, at least until my current favorites rotate out and I can make a Modern deck around them.

Anyone else play? I bought a Dimir Rogues starter deck (Challenger - pre-constructed with blue/black, lots of interactions with opponent’s graveyard) that I’ve been slowly modifying. So far I’m 0-fer on all my tournament nights (3 I think?) with a few draws, yet I’m enjoying the research process and trying to think about how my cards might interact with what I’ve already got keeps me going.

Haven’t played a lot lately due to a poor experience in the local scene followed by pandemic, but I enjoy it.

I specialize in building cheap decks that can sometimes win against the $2,000 decks, even if they usually lose. My favorites are an EDH deck featuring Merieke Ri Berit, with a lot of nasty tricks, so I’ll just add my favorite:

and a Legacy, nearly Modern deck that wins by giving other players life:
https://gatherer.wizards.com/pages/card/details.aspx?multiverseid=126813 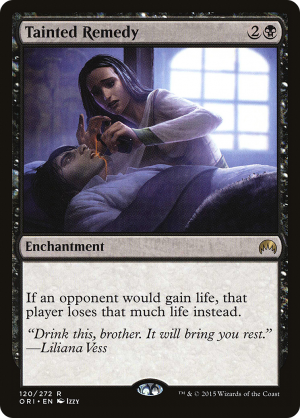 If an opponent would gain life... (Read more)

Also have a silly proxy’d deck that wins on turn 1 about 35% of the time, on turn 2 about 5%, and almost always loses otherwise. It has 0 lands and 0 creatures. It basically is designed to discard some cards to gain temporary mana, mill until it hits a land, then deal that much damage to the opponent.

(Oh wait, it actually does have some creatures. Just if I play a creature spell it means I’ve lost already.)

I pretty much exclusively play Limited. I play online a lot but did an in-person Sealed prerelease for the D&D set last month. Would love to play some kind of larger event if that ever happens again

Anyone else play? I bought a Dimir Rogues starter deck (Challenger - pre-constructed with blue/black, lots of interactions with opponent’s graveyard) that I’ve been slowly modifying. So far I’m 0-fer on all my tournament nights (3 I think?) with a few draws, yet I’m enjoying the research process and trying to think about how my cards might interact with what I’ve already got keeps me going.

You should be able to do better after rotation, the sets rotating out (mainly Eldraine) should only do good things for the format as there are a lot of incredibly strong cards there, and the Rogues deck keeps a lot of the good cards. I’d recommend trying a sealed prerelease when the new set comes out, you might get some nice cards and/or catch the Limited bug.

Yeah, I did the D&D prerelease and had fun. I’m planning to do the same for the next one as well. I think that putting everyone sorta kinda on a level playing field is a positive of the Standard format. I heard one guy say that he doesn’t like Modern because there’s so many cards, and, ironically, “the more cards available, the fewer anybody actually plays”.

When you say “larger event”, how many people is involved? There are a couple of comic and game stores around here where weekly or daily events are back up and running, with 8-15 people on a Friday night. (At least, the ones I’ve been to in the last 2 months.)

They used to do big tournaments in convention centers pre-pandemic, 1000+ or more people sometimes. No large-scale events are planned this year though.

“the more cards available, the fewer anybody actually plays”

Disagree with a caveat.

Standard players are “I am good paying a decent amount of money for a very balanced experience and I like to look at spoilers online and read comments to make sure I’m not picking a trap card, and I like doing mock drafts for practice.”

I find that Modern players are the min-maxers of “I found a combo online so my deck costs $5000 and is designed to win by turn 4.”

Legacy players are “I like fun decks, sometimes they might cost $1000 or so, but they also might just be $40 because I really like werewolves and wanted a werewolf deck. There are a few cards that cost $4 each.” I find most people play Legacy, or at least if you’re not playing stupidly broken decks they’ll break out a Modern or even Standard deck against you.

Vintage players are, um, something else. “I have all of these cards double-sleeved in my binder, but the deck is all proxies for them because I’m not going to shuffle my graded Time Walk, it costs over $3,000.” Although I have seen a full-on Vintage game with at least $35,000 on the board.

“the more cards available, the fewer anybody actually plays”

Although I have seen a full-on Vintage game with at least $35,000 on the board.

As for your disagree, that’s fair. I’m only reporting what I heard, and I’m still learning all the different mechanics and game styles and deck styles and cards and … and … and.

I mean, throw out a Black Lotus and you’re talking a cool $1k even if it’s heavily damaged (I assume, it’s been a while since I’ve looked). The $500k price max for that card is quite the outlier but I feel like they usually go for at least $5k in decent condition. Looks like Time Walk is around $4k. Mox Ruby is around $4500.

Last week I bought the set of 5 Strixhaven Commander pre-constructed decks, and my son and I have been playing through them. Pretty fun, and clearly Commander is a breed apart from the others. I like having the deck already set up to do stuff so I don’t have to try to craft something from scratch when I don’t know like more than 3% of the universe of available options of game styles, cards that do that style, etc.

Also looking forward to the Innistrad pre-release in a couple of weeks, we’re going to go over and have another good time. Then I’ll get a chance to break down my Standard deck and see how I want to build it back up again after half the cards rotate out.

I’m really getting into it, at least to the tune of watching lots of videos recently (The Command Zone’s “Game Knights” and “Extra Turns” is good for me to learn not just what people are playing, but some of their thinking as they do). Not spending a lot of money yet (certainly less than $500 invested so far, across buying the original deck and the pre-release and some individual cards and a couple of Booster Packs and, well, now these sets and sleeves). So far it’s a fun hobby and an easy distraction because there’s so much to explore, compared to, say, chess or Sudoku that are still intelligence-based diversions, and have started to get a little stale for me.

Love that you’re playing with your son. Don’t know their age but it’s a great way to get critical thinking and math chugging along.

Probably my greatest accomplishment in life was winning a Magic Tournament when I was around ~11, in a store full of grownups using an el cheapo deck.

It was a special time, because folks were allowed to play black-lotuses, but they didn’t know HOW to.

is all I have for that, I was born after MtG.

My boo didn’t mention it above, but he plays Magic with 13 too. They sometimes go out to those big groups on Friday nights (when the small boos are here for the weekend) and the two of them come home at 11 PM or 12 AM - the kid is basically a zombie at that point since he usually goes to sleep 2 hours earlier.

During this time, me and 10 usually head to the grocery store to acquire baking supplies and we spend the night making cakes. Last Friday I convinced her to do ice cream with me instead. I wanted a banana split from Dairy Queen BUT THE ONE NEAR ME CLOSED DOWN. We drove 20 minutes to the next closest one… but it closed 5 hours earlier than it said online. (Is Dairy Queen dead or something?? What’s going on guys???). So anyways, I made the executive decision to get grocery store ice cream instead and combined it with either candy or whipped topping in a milkshake. Twas gluttonous glory.

Mostly I think it was the magic of the Pre-Internet days. So you couldn’t just google how to win at life.

That does kill the game for me. “Oh, you spent $650 on a net-decked Urzatron. Cool. I’m going to play with that group now.” And that’s a pretty mid-priced Modern deck!

Ugh, yeah I feel bad for my mom and dad having to Feed My Habit for a decade.

It helps a lot I think if you just have friends to play casually with (which it sounds like Bro does).

Also iirc, drafts aren’t too wildly expensive. Not cheap either, but cheaper than strippers anyway.

Younger son is 13, he’s the one I’ve been playing with mostly. Older son is 16. I’d like to play more with him, especially 3 or 4 at a time, yet he’s pretty involved in marching band right now and doesn’t have the time. Perhaps in a couple of months. The summer nanny was really into Magic (like really, really, really into it - binder and special boxes and more) and that sparked a lot of our interest.

The Friday night group has one little guy who’s maybe 9 or 10. His hands are so small he can’t shuffle the deck! His dad does it for him. He’s beaten me in 2 games both times we’ve played.

And yeah, the upcoming pre-release draft event is going to be like 35 bucks, which is definitely cheaper per-hour than strippers.

That does kill the game for me. “Oh, you spent $650 on a net-decked Urzatron. Cool. I’m going to play with that group now.” And that’s a pretty mid-priced Modern deck!

I’ve started seeing videos from people who build decks under $1 or $2 or $3. Might try one or more of those just to get some more setups for play diversification.

I’ve started seeing videos from people who build decks under $1 or $2 or $3. Might try one or more of those just to get some more setups for play diversification.

That seems nearly impossible… at least for under $1. Even bulk commons are usually a few cents each But I’ve done friendly competitions at a $10 maximum, that’s a lot of fun.