Anyone been following this? Between the fake Kavanaugh crying by Rittenhouse and the biased judge, it looks more like an SNL skit than an actual trial. I can only assume he is going to walk free. Closing arguments start today. 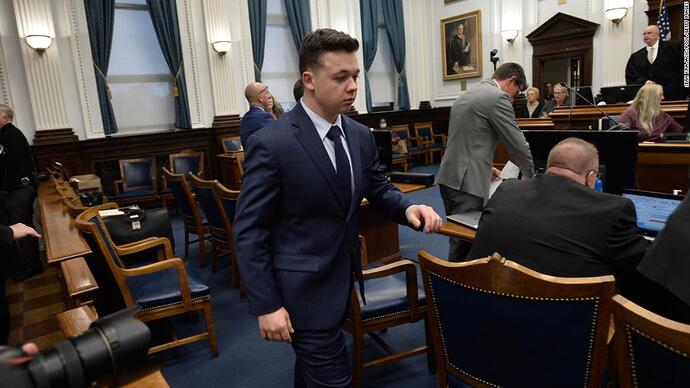 Kyle Rittenhouse, the armed Illinois teenager who killed two people and wounded another during unrest in Kenosha, Wisconsin, last summer, is on trial on homicide charges. Follow here for the latest.

), including providing some history around what led to the protests. 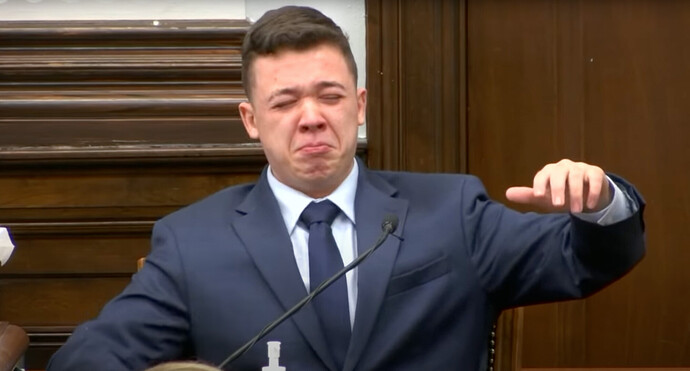 An impartial look at the Kyle Rittenhouse case

We summarize what happened, what's going on in the trial, and what pundits on the right and left are saying.

It seems like the trial is illustrating some serious issues with the way self-defense is defined/used, particularly when it results in lethal force being used. It also is just one more example of disparate impact based on race. There is no chance that if 17 yo black kid from Chicago showed up to a Proud Boys demonstration with a gun that the trial would be even remotely similar.

He certainly deserved to have the book thrown at him for illegal possession, and probably reckless endangerment too.

It does seem like he may have a legit self-defense claim on at least some of the charges, like intentional homicide. At least that was the vague impression I had after reading Wikipedia’s timeline. I’ll read the linked article too and see if I change my tune.

The Tangle article is a good read. The bar for self defense claims is just so low, and Rittenhouse faced much more on the streets in those moments than most police officers who shoot a suspect. The issue I see is the idea that law enforcement in a volatile situation can be handed over to anyone with a gun. Guy with a gun shooting people without being in a uniform or any sign of being a proper authority is going to end up in a confrontation with someone trying to get him to stop shooting even if his initial acts were in justified self defense.

The judge seems like he has been paid off by the defense.

Could not care less what happens to Kyle. Plenty enough gun deaths each day, so why should I get worked up over this poor kid? His life is already screwed up.

All you have to do is provoke someone enough that you feel threatened and you can kill them.

Could not care less what happens to Kyle. Plenty enough gun deaths each day, so why should I get worked up over this poor kid? His life is already screwed up.

Because he could get off, and that opens up precedent for anyone in the country to shoot people “in self-defense” and not be punished.

Huh, read the whole Tangle article, and I agree with the author 100%.

Thanks for posting @Kenny.

I would agree with the self-defense argument… IF Kyle hadn’t intentionally travelled across state lines, carrying his own weapon, with a clear intent to shoot and kill people.

Someone’s coming at me, I’m allowed to defend myself. If I start chasing them, and they turn around to defend themself, I’m no longer defending.

Kid needs to get 2x life in prison, IMO.

This is not true. That is true in a stand your ground state, which there are quite a bit of but Wisconsin is not one of them. In Wisconsin you actually have “duty to retreat” which he did not follow. The lawyers are most likely trying to claim the clause that you don’t have to follow duty to retreat when threatened with robbery, which is what I had read was he “reason” for going there. But if he provoked them then I don’t see how he wins in Wisconsin

A guy smashed his head with a skateboard. I think that’s self-defense.

As I understand it the charges are:

Judge just dismissed the last one as it apparently doesn’t apply to persons over 16 with long guns.

I’d probably find not guilty of the first three and guilty of the two recklessly endangering safety charges. And give him the max sentence, and require it to be consecutively served.

The whole giving someone cash to buy you a gun so you go play vigilante should definitely get you sent to prison for a few years, but the actual people who he shot… it all seems pretty reasonable that he shot them (once you condition on the fact that he’s there with a rifle).

I agree, although I don’t think I’d sentence a 17 year old (at the time of the crime) to 25 years, especially if he’s not guilty of murder.

He went there with an intent to shoot someone.

Interesting, although like you pointed out there could be other legal arguments to justify it. I am thinking from it more from how his “victims” have been framed, as the aggressors, which I think ends up being the default reasoning in most situations and easiest for a juror to relate to.

I put victims in quotes because the judge banned the term from being used in the trial.

Eh, I would. What he did is pretty serious, IMO.

He went there with an intent to shoot someone.

I’m not sure this is provable. I’m not even convinced that it’s true.

Oh yeah I mean I can see 5-10 years for illegal possession of a firearm and all that stuff. But if he’d done that and not killed anyone it’d be crazy to send him to prison for longer than he has been alive.