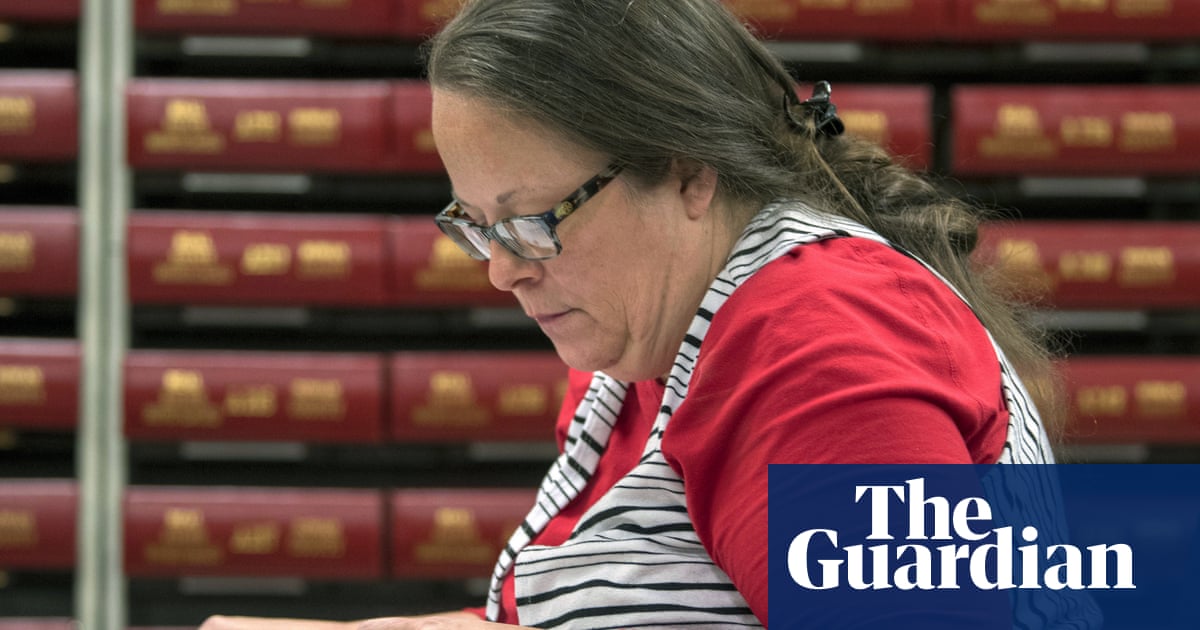 Not surprising… seemed like a pretty open & shut case from the get-go.

You don’t get to refuse to issue marriage licenses for any other reasons that might go against your religion or conscience. Such as a couple that was cohabitating or had a kid or the woman was pregnant or it was an interracial couple or an interfaith one or any number of other reasons you might find the match objectionable.

Doesn’t seem like same sex couples should be in any different category and, oh look, they’re not.

The article points out that it could end up at the Supreme Court. Previously, Thomas and Alito made these comments about the Kim Davis case:
"Nevertheless, this petition provides a stark reminder of the consequences of Obergefell. By choosing to privilege a novel constitutional right over the religious liberty interests explicitly protected in the First Amendment, and by doing so undemocratically, the Court has created a problem that only it can fix. Until then, Obergefell will continue to have “ruinous consequences for religious liberty.”

So with the court having 6 justices sympathetic to religious beliefs, I wouldn’t assume this is as open and shut as you think it is.

The problem is that this was made law by the court. Should have been made law by the lawmakers instead. The reason is exactly what Justice Thomas and Alito stated. Since the law only implies gay marriage is ok instead of explicitly stating it they have to square it away with other implications like the freedom of religion.

The public official in this case, i.e., THE STATE, is attempting to establish her religion and to impose it on other people.

It doesn’t seem any different from interracial marriage in that regard. That was legalized (in some states) via the SCOTUS.

How would they view a clerk who refused to issue a license to an interracial couple on the grounds of religious objection?

Thomas himself is in an interracial marriage. If it goes to the SCOTUS the attorney for the state should absolutely argue this angle.

Thomas himself is in an interracial marriage.

And I would add that he hails from a state where his own marriage would not have been legal until a few days before his 19th birthday. Thanks solely to a SCOTUS decision.

I don’t see how making gay marriage legal via a law would solve this problem in any way. The constitution always supersedes laws passed by congress. Saying that gay people have the same constitutional protections as straight people is a much stronger stance than passing a law saying gay people can get married.

The real problem is that we have to pretend that having somebody execute their job as an agent of the state is somehow a violation of their religious rights/beliefs. I don’t think we want police officers showing up to an incident and refusing to enforce the law because they have some alleged religious objection to some laws. This would cause extreme problems.

Seems that logic could have been pretty easily applied in either direction which leaves the decision open to further review in years to come which is exactly what is happening. A real law stating exactly what is and isn’t legal with regards to marriage would have cleared everything up.

Is there a “firsties” legal precedent?

They came to the conclusion that the answer to both questions was yes. So the logic can’t be implied in both directions.

No. I disagree that doing your job as an agent of the state violates somebody’s religious rights.

I assumed and was being facetious. However we also have cases where doctors can refuse (even life-saving) abortions, birth control, etc. so I have little faith in the system for marginalized groups.

Otherwise we could have all kinds of silly things where actors of the state get to object to random things. At worst they can recuse themselves.

In Alabama, after the federal ruling on same-sex marriages came out, several probate judges started refusing to issue marriage licenses to anyone. The judges in question had religious objections to granting same-sex couples permission to marry, and since they couldn’t legally discriminate, they refused to issue any licenses.

Eventually, Alabama changed its laws; the state no longer has marriage licenses; instead they require county probate judges to register couples who say they’ve been married (without regard to gender), thereby sidestepping the judges’ religious objections.

At worst they can recuse themselves.

I would be ok with them recusing themselves as long as there is someone else who can perform the action without causing any additional inconvenience.

So a pharmacist doesn’t have to dispense a particular drug as long as there is another pharmacist on who can do it in the promised time frame. The clerk on the OP can recuse themselves as long as there is someone else who can issue the marriage certificate. These are job responsibilities that were known when the position was accepted. I am ok with “reasonable accommodations” to the extent it doesn’t prevent the required service from being provided.

The judges in question had religious objections to granting same-sex couples permission to marry, and since they couldn’t legally discriminate, they refused to issue any licenses.

It sounds really dumb, but at least they weren’t attempting to create an obvious violation of the 14th Amendment.

def. but it is consistent.

The Chief Justice of the Alabama Supreme Court at the time argued that the probate judges in question should ignore that particular ruling…but at least most of the objecting judges didn’t go that far.

Lots of ugliness there. At least the end result, of registering marriages rather than requiring licenses to marry, is a good one. (For the most part, the government shouldn’t be saying who can or can’t marry, assuming the folks involved are capable of granting informed consent without coercion and have done so.)