I don’t think we disagree on anything there.

No, but for the purposes of the forum, lets assume we do.

Same thing with Critical Illness insurance. What if you get a disease not covered by the policy? Doesn’t matter… there’s a few that people are scared of, so that’s what they want covered. Not the stuff they haven’t heard of. That doesn’t matter.

From what I’ve seen, canadians are huge on CI and Americans less so. That’s amazing, considering if Canadians get a covered condition that CI is a nice to have, not a must have. You can have a heart attack or get cancer and total cost of treatment is $0. I’m pretty sure those conditions can be catastrophic in the US, so why don’t more people buy it?

And CI sells itself, way easier than life or LTD. Add an ROP rider and you have “if you get cancer, they pay $100K, if you don’t, you get all your money back”.

You can have a heart attack or get cancer and total cost of treatment is $0.

Yeah in the US your total cost will be your insurer’s policy limit, which is a lot higher than $0. You can hit the policy limit for reasons that aren’t covered by Critical Illness insurance too, of course. But you’re certainly right in that it’s less logical in CA than it is the US.

I recall advising a friend to buy AD&D insurance at one point. But that was a very specific circumstance where it was all she could get during a coverage gap. Her birth control failed and she was unexpectedly pregnant. (Obviously for a planned pregnancy you need to bump up the would-be father’s life insurance the day you throw out the birth control, but this was unplanned.) They’d applied for an individual life policy but it was taking too long to get the policy issued. I guess you get coverage for 30 days when you pay your first premium, but if it takes longer than that then you’re not covered again. And work was launching a new AD&D product and letting employees sign up mid-year. So I said well get him the AD&D coverage so at least if he dies in an accident you’ll get something.

But we were both very clear that this was still leaving her vulnerable to not getting enough if he died from natural causes, which was more likely.

Her Life coverage gap only lasted like two or three weeks and thankfully he didn’t die from natural causes during that time. (And in fact is still alive many years later.)

And he had the standard 2x annual salary from his employer plus she would’ve been eligible for Social Security survivors coverage, so she wouldn’t have been penniless… but they had decided that wasn’t enough.

(Obviously for a planned pregnancy you need to bump up the would-be father’s life insurance the day you throw out the birth control, but this was unplanned.)

To anyone who’s thought about it and wishes to be prepared for a worst-case scenario.

Your would-be father could die the day after impregnating you when you don’t even know you’re pregnant.

I don’t disagree with your premise, although we changed nothing on my husband’s life insurance since our roles are not traditional and him dying would actually be a windfall to me financially even without insurance.

But I don’t think most people think about changing life insurance when they are thinking about having a child so I’m not sure it’s “obvious.” Obvious to actuaries and financial planners and insurance agents and accountants, probably.

Obvious to actuaries and financial planners and insurance agents and accountants, probably.

In other words, basically anyone reading my statement. I would not assume it would have occurred to a financially illiterate person; I would explain it to them so that it would be obvious to them too. But it’s not like it requires an advanced understanding of mathematics or finance.

I give the readers of this forum more credit and assume they can figure this out on their own without my explanation.

Accidents might be the leading cause of death, but they account for well under half of deaths.

I assume you mean for those under an “old” age.

Here is a nice table of top ten causes of death (with some numbers) for males in the U.S. by broad age group from 2017: 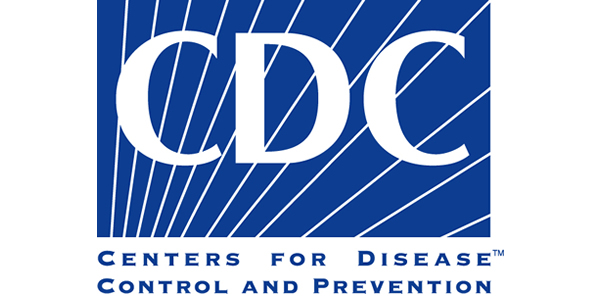 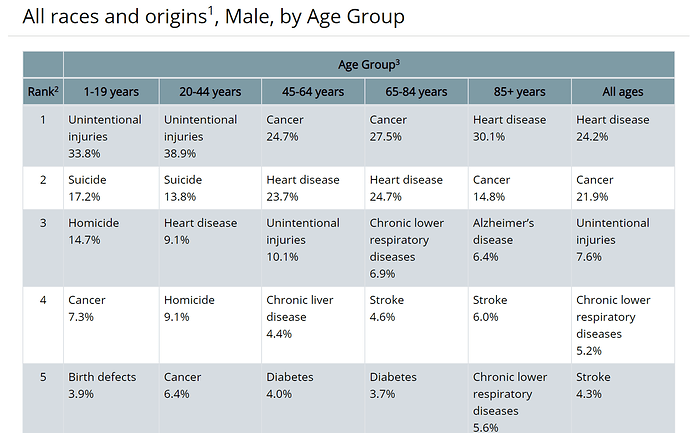 But talking about “drawn out deaths” vs “sudden” – well, unintentional injuries tends to be fairly rapid (though you may have an accident, and then linger in the hospital for a while… the UCD (underlying cause of death) will be the accident). Homicide & suicide also tend to be rapid.

Heart disease can be rapid or slow (my father’s heart attack killed him rapidly).

Cancer tends to be more drawn out, same for Alzheimer’s.

him dying would actually be a windfall to me financially even without insurance.

Is he a gigolo?

I had thought he was more of a stay-at-home Dad who was doing things that have economic value like taking care of kids and doing a lot of chores around the house. There would be a cost to hiring that out if he died.

Yes but you were talking about a friend who may or may not be one of those things, as if it’s obvious to anyone. And the AO was full of non-actuaries, I don’t presume everyone here is one, either.

And anyway beyond my pedantry, I bristle that it’s “obvious” to get a life insurance policy on a potential father. Plenty of circumstances, like mine, make that not so obvious. Times are changing.

He also drives a car and has auto insurance and eats food and has a more expensive taste for home improvement than I do. Him being dead would be less costly than me paying for latchkey childcare.

Anyway all I’m saying is if he winds up dead, I’m still suspect #1 even without any life insurance coming to me (I have him insured through my workplace because it’s offered, but all his term life money would go to his ex wife to pay for my stepson).

I assume you mean for those under an “old” age.

I was specifically talking about NerdAlert, who I think is in her 30s or possibly early 40s.

And focusing on why AD&D insurance is more akin to a lottery than something that provides true protection for her family.

I agree and already pointed out that NerdAlert is almost certainly less likely to die in a way that triggers an AD&D payout than broad stats that cover her age group, and in fact I provided 2018 stats for ages 25-44, which I think slightly more accurately pinpoints her age group than 20-44. Certainly 20-24 year olds are responsible for a disproportionate share of accidental deaths.

Splitting out by age and sex would be more accurate too since men in that age group are hugely more likely to be in accidents than women. But in the time I spent searching (not much) the only source I found that split by age and sex did so in a way that would have been extremely annoying to aggregate so I didn’t bother.

I am still technically early thirties for a couple more months! Clinging to that.

bristle that it’s “obvious” to get a life insurance policy on a potential father.

Putting aside the father part, it is fairly obvious. You’re creating someone who’s financially dependent on you and should likely insure the risk of you not being able to provide for them financially. That seems reasonable no matter what times bring in the way of family structure. There are exceptions, but they are exceptions. And it’s not unheard of to get insurance on both parents when they’re pregnant.

Even a stay at home parent provides value that’s insurable; the loss of their contributions can be measured by the replacement cost, and that’s insurable. Perhaps that loss isn’t catastrophic for some people so they don’t bother to insure, but again, that’s the exception not the rule.

Anyway, I’m a fan of thinking it through, because everything is based on assumptions - assumptions that are frequently treated as facts they’re so culturally embedded.

Which brings up another point that no one thinks about when they buy life insurance.

Parent-on-parent homicide is one of the more common forms of homicide among those with life insurance. But it ties up the insurance payout for a decade or more (maybe less in Texas). Assume that Dad kills Mom.

Dad is probably the 100% primary beneficiary on the policy with the kids as secondary beneficiaries getting equal shares.

So the insurer can’t pay Dad because he’s a suspect in the murder. But they can’t pay the kids because Dad is protesting his innocence. If he’s found not-guilty then he’s entitled to the money, not the kids. If he’s found guilty then you have to wait for all of his appeals to run out before you can pay the kids. This can take a long time, by which point the insurer has escheated the claim to the state and washed their hands of it. In the meantime the kids need soccer cleats and swimming lessons and clothes and money to pay for college and they have no access to the insurance money.

So leave a portion of your assets directly to your kids. Especially if you have a crazy ex.

Maybe we are simply disagreeing on terminology. Prudent/practical things aren’t always obvious. I would gather that the vast majority of people who are having children are not getting life insurance, or increasing their coverage. I don’t know that it’s obvious to them. Life insurance is a luxury for a lot of people. I don’t think that means they shouldn’t be having children.

Nah, her being a full time single parent would be her own personal hell, she barely enjoys being a parent as it is. That usurps her hatred for Mr. NA.

Splitting out by age and sex would be more accurate too since men in that age group are hugely more likely to be in accidents than women. But in the time I spent searching (not much) the only source I found that split by age and sex did so in a way that would have been extremely annoying to aggregate so I didn’t bother.

I linked to the top causes of death for males, btw.

Find links to current and previous listings for the leading causes of deaths for females in the United States. 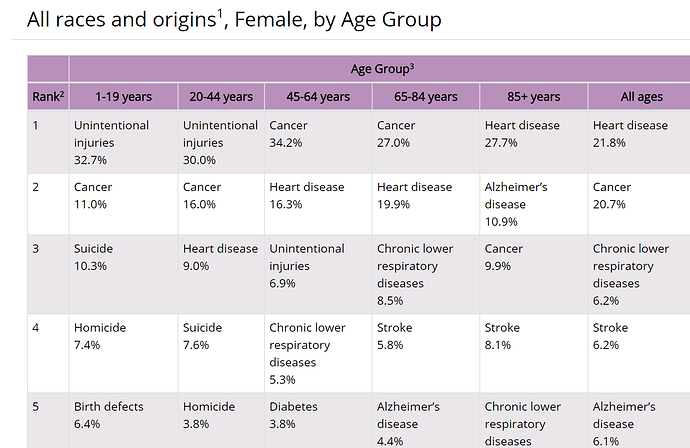