How many syllables does crayon have?

Some folks in the Midwest pronounce it “crown”.

That was one of my grandpa’s favorite expressions.

One of my uncle’s favorites.

The spelling of mayonnaise always bugs me. It should be spelled phonetically, like mownayz.

Who pronounces mayonnaise with a “o” in the first syllable?

It is spelled phonetically, en Français.

Again, from the work of Josh Katz: 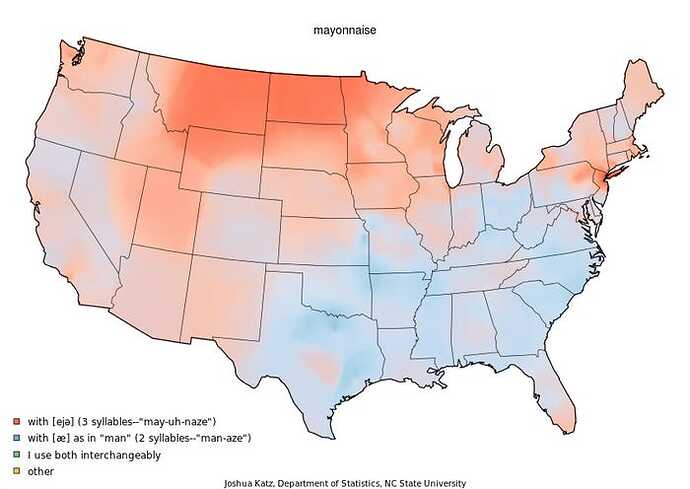 Crayon sounds like ‘cran’ unless weaselette is nearby - then I deliberately stretch it out to ‘cray-on’. She has a thing about that word.

Recently saw ‘An Officer and a Gentleman’ so I can’t see mayonnaise without all the syllables, with an emphasis on the ‘naise’

My tongue does make a movement in both “mayonnaise” and “crayon” where the “yo” is, like a half hearted jump on a trampoline, but there is no impact to the pronunciation.

While we’re at it, how do you all say ‘caramel’?

don’t start. I try to avoid pronouncing caramel in front of people.

Same with data. When you have two people conversing about data and one consistently says day-ta and the other da-ta it makes me giggle on the inside, because neither side wants to succumb

While we’re at it, how do you all say ‘caramel’?

I go back and forth between ‘cair-uh-mel’ and ‘car-mel’. Weaselette prefers the 2-syllable version and it drives her nuts when people say it the other way. Kind of entertaining to say it ‘wrong’ on purpose, but I try not to overdo it 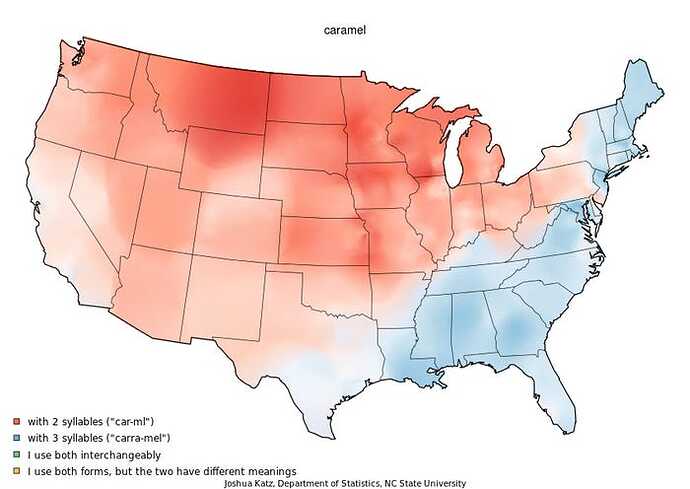 I use both depending on my mood.

I usually say “carra mel”, but “car ml” sounds normal to me, and I’ve probably said it sometimes. Unlike “cran”, which I honestly am not sure I’d recognize if I heard it in the wild.

I don’t usually talk about mayo. But I like to make creme caramel, and draw with crayons.

What about that big cat in the zoo? The one with the orange and black stripes?

and draw with crayons.