How does the Fence precedent apply here?

Neighbors A (me) and B live on the same street, with property line perpendicular to the street. Sounds simple. Except neighbor C lives sort of behind B, on a cue-de-sac that does not intersect our street. So the back of his lot creates a diagonal along the side of mine, narrowing mine to the back of it. C has a fence around his property. 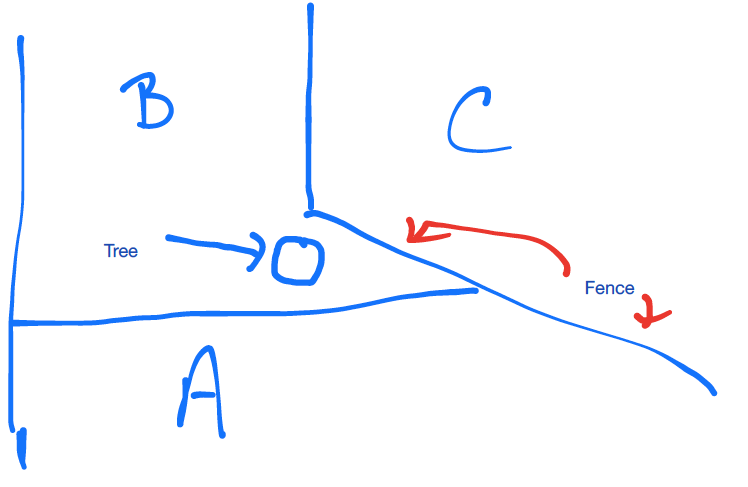 There’s a big old walnut tree, on B’s property, with branches stretching out over all the properties. Over the weekend, a big branch broke, so that the end fell to the ground, but the branch did not completely separate from the tree. The tip of the fallen branch is completely in my lot. The break is above B’s property. Thus far, no impact on C.

But, were the branch to sever completely, there’s a good chance it would land on C’s fence, at a point where the fence is between A’s lot and C’s.

The AO had principles that would have some applicability, even if based on a situation where there were only two potential payors. Here there are three, and there are potentially tree removal costs in addition to fence costs. If tree removal is done promptly and well, there will not even be any fence costs. Alas, the AO is defunct, creating uncertainty about what the established principles were and on whom those principles remain binding.

Had the branch simply fallen on the fence, it would be Cs problem wholly with regards to HO insurance covering the damage. Disclaimer: this could vary by state.

With it dangling, it is still technically Cs problem if it falls. That’s how our claim staff would handle it, unless there were documentation that C had requested it be removed by B (still his branch, attached to his tree) as it is in a perilous state. If B then took no action, it could be deemed negligible on Bs part. Anything crossing A’s property line could be removed at A’s discretion, though with no obligation to do so. Disclaimer: this could potentially vary even by company.

If all three of you have 3 different insurance companies, it could get messy, though I see no real possible way that A (you) could be held accountable.

If debris removal is subject to a deductible, i’d consider that a negligible cost for a single branch.

If all three of you have 3 different insurance companies, it could get messy

They’d probably take this up with the branch manager

Had the branch simply fallen on the fence, it would be Cs problem wholly with regards to HO insurance covering the damage. Disclaimer: this could vary by state.

Is this because it was dangling within his property before falling? Alternatively if the tree simply fell entirely onto the fence it would be B’s liability, no?

In my state at least, even if the whole tree fell, still C’s problem. There’s a colloquial saying that if a tree falls on your property, it becomes your tree. I’m fairly sure there’s either a relevant general statute here, or something in the ISO language but couldn’t quote it off hand. It came up repeatedly when I was an underwriter with agents trying to argue (to me and not the adjuster for some reason) that it shouldn’t work that way…but it did.

Oh interesting, yeah looks to be the same in NJ

When a tree hits your home or car, who is responsible? - nj.com.

Skimming through the policy forms, I think the tree counts as a ‘Falling Object’, which is specifically listed in a named peril HO policy, and not excluded from an all peril policy. A tree falling from natural causes could not be pinned as neglect, which is why there’s no liability attached to the actual property owner.

With the dangling branch scenario, there is an imminent threat to the fence though. I still believe there’s a burden here for C to point it out as an issue (and document it…text message perhaps), that will then attach some liability to B if it is not addressed. Again don’t think there’s a case for A to be negligible even if C wants it.

I see yeah this is interesting as you describe, the branch almost falling basically give C warning to put that liability on B before it falls

Which neighbor threw bamboo over the fence?

We are not in Arizona. AFAIK, no one is testing for bamboo yet.

They’d probably take this up with the branch manager

If all three of you have 3 different insurance companies, it could get messy, though I see no real possible way that A (you) could be held accountable.

Only potential issue I see is that if the branch had just fallen, it almost certainly would not have hit the fence. Now that the tip of the branch is stuck on my property, further motion my way is more restricted, which could cause the currently-attached end to end up further toward C’s direction (but maybe on the BC side rather than the AC side or where the three property lines meet).

I brought the fence issue up just because of the AO connection. I suspect the bigger expense will be the branch removal, not yet discussed with any of the neighbors. It’s only a chain link fence. For precedent on these particular lots, last year the top of a tree (not as large a tree; broken top’s size is comparable size to this year’s branch but a little smaller) fell from a tree in C’s lot mainly into my lot, putting a significant dent into the fence, and C didn’t even bother getting the fence repaired. As to the cleanup of it, I was just dealing with it with a camp saw. C saw and loaned me his chain saw. Some time but no out of pocket cost: OK all around. If this branch falls without hitting the fence, I’ll try to borrow the chain saw again.

Here to say i miss the :tup: emoji
Talk to your neighbor B before any branch cutting

The French have a phrase…

Since there are 3 parties involved, I suggest m/m/s.

I know some would suggest pay for half the fence, but then you’d be paying for 3/2 of the fence, which is just silly!!!

According to my substantial knowledge gained from watching Judge Judy, A has no liability in this case. A can remove any part of a branch hanging over their property up to the property line at their own cost. I am guessing that this still applies to the downed branch because it is still attaches to the tree. However, if the branch is dead, A may be able to recover the disposal costs from B as this is abandoned property left in A’s yard. B can remove the entire tree or any branches. C can also remove any part of the tree that overhangs their property. Damage to the fence caused by the tree falling will be B’s liability regardless of the condition of the tree. Also, neither A or C has any standing to either force B to remove the tree or remove it themselves if the tree is either dead or is sick and has the potential to cause harm. A or C could put B on notice that the tree is likely to cause damage and recommend it be removed which would improve A and C’s position in the event that the tree actually caused damage.

Please keep in mind that Judge Judy is a mediator and not required to follow all legal precedent although she appears to do a good of it most of the time. I am pretty certain Judge Milian on the People’s Court would rule the same way.

Also, Steve is a nice neighbor helping clean up the downed branch. I’d probably do the same thing but ask if I could keep the firewood.