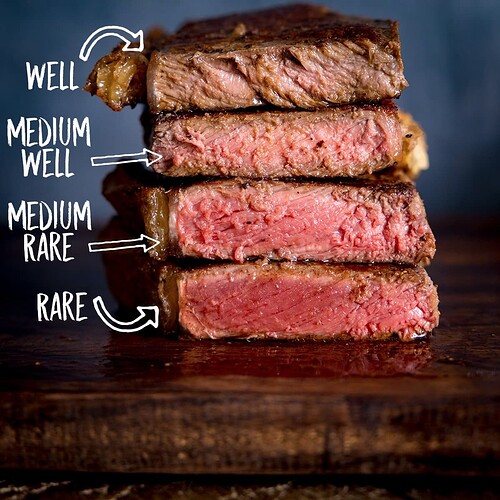 Medium rare mostly, then rare, then medium if I have to.

Sous vide and seared. Doneness depends on the cut, for a lean cut I’ll go more rare typically, for something like a ribeye I’ll usually go for 133-135°, on the line between medium rare and medium.

medium rare. but that picture makes it look gross for some reason

Rare, bordering on blue. If it’s not still breathing when it comes out, I’m not interested.

that picture of medium rare is more like medium

I prefer mine free.

This thread is making me hungry!

I have a freezer full of beef - half of a grass-fed cow from my in-laws, I’m gonna go take a look at what I might want for dinner.

A1 sauce, it’s how steak is done

I don’t always eat steak sauce on my steak, depends on how flavorful the meat is. A1 was my favorite for years, followed fairly closely be Worcestershire sauce. But then I discovered Andria’s, and now this is my go-to steak sauce 90% of the time.

Warning: be aware before ordering you steaks rare:

Blockquote
The spokesman couldn’t confirm another report, from WPVI-TV in Philadelphia, which quoted a patron who said the fight started after he received his steak before the customer in front of him in line.
“I had a rare steak, which is a lot faster to cook than a well-done steak. That’s why I got my steak first,” Alexis Rios told the reporter for 6 ABC. “I grab a chair to defend myself, and then sooner or later that was it. Punches were getting thrown. Chairs were getting thrown.”

brawl at the OK, I mean Golden Corral

Dude who ordered a well done steak should’ve been the one attacked for ruining that cut of beef.

Saw a video of it. Chairs and tables were flying.

Medium rare. When I cook it though I struggle to find that sweet spot and often end up closer to medium well. 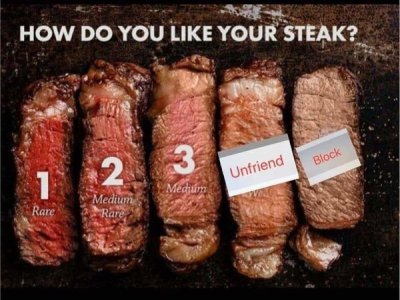 Yes, I would eat that stack.