For a change nbcnews.com

“We condemn the U.S. air attack that targeted a site on the Iraqi-Syrian border last night, which represents a blatant and unacceptable violation of Iraqi sovereignty and national security in accordance with all international conventions,” a spokesperson for the commander in chief of Iraq’s armed forces said.

“Iraq renews its refusal to be an arena for settling accounts, and clings to its right to sovereignty over its lands, and prevents it from being used as an arena for reactions and attacks.”

But rt.com (and rt.comcoverage of that event is much better with more links and info.

I approve of your update to a not obvious propaganda source

More firework as we speak
rt.com

Likewise, the attack was next to useless if its justification was punishment-based deterrence. The timing of the attack – 01:00 local time – seemed to have been selected to reduce the potential for casualties, although it appears that several PMF militia, and possibly some civilians, were killed. Likewise, the infrastructure destroyed can be easily rebuilt. If the goal were to intimidate the PMF, the mission failed. The PMF has promised to avenge those who were martyred in the airstrikes and said its attacks on US forces in Iraq would continue unabated.

The most perplexing aspect of this airstrike, however, is its timing, coming only one day after Iraqi Prime Minister Mustafa al-Kadhimi attended a celebration of the seventh anniversary of the creation of the PMF, held at Camp Ashraf, the former headquarters of the anti-Iranian Mujahedeen-e-Khalq terrorist group, located about 100 kilometers (62 miles) northeast of Baghdad. The PMF paraded thousands of its fighters, along with tanks, rocket launchers, and drones, before a reviewing stand that, in addition to Kadhimi, included Defense Minister Juma Inad, Interior Minister Othman Ghanmi, Iraqi Army Chief of Staff Lt. Gen. Abdul Amir Yarallah, and PMF Chief of Staff Abdul Aziz al-Mohammadawi.

More important than the list of attendees, however, is what Kadhimi said about the PMF. In a tweet released during the parade, the prime minister noted that “[w]e attended the parade of our heroic army on December 6 (2020), as well as the brave police parade, and today we attended the parade of our sons in the Popular Mobilization Forces. We affirm that our work is under the banner of Iraq, and protecting its land and people is our duty. Yes to Iraq! Yes to Iraq, the strong and capable country.” Kadhimi went on to highlight the fact that the PMF was a state service, and praised its role in the ongoing struggle against Islamic State.

To reiterate, one day after the prime minister of Iraq, in the company of his military and national security team, declared the PMF to be an essential part of his nation’s state security, the US undertook to bomb these same forces at locations in Syria and Iraq from where the PMF carry out the very anti-IS operations praised by the Iraqi PM – and did so without either informing the Iraqi government beforehand, or seeking its permission.

What’s the concern? US drone striked a bunch of ISIS in the desert between Syria and Iraq and rt.com thinks it was unsuccessful?

The US needs to shitcan the drone strikes. Even if the US government wanted to stop being the global bully it will take a concerted effort and a couple of decades to pull back all the tentacles lest we leave power voids which have the potential for making things significantly worse.

Finally my favourite blogger (who lives on donations from readers not like govt funded Elliott Higgins) moon of Alabama wrote an analysis.

An overarching aim of the Biden administration is to concentrate all its forces on the competition with China. To that purpose it has planned to largely leave the Middle East behind - the place where the U.S. has wasted its resources over more than two decades.

To leave the Middle East the U.S. needs to find some form of peace with Iran. The Biden administration thus set out to reenter the nuclear deal. It must lift the sanctions Trump imposed against Iran to get there. But then mission creep set in. Instead of just lifting the sanctions in return for Iran’s adherence to the limits of the nuclear deal the Biden administration has sought more concessions from Iran while offering less sanctions relief.

Iran has made its position clear. If the U.S. lifts ALL sanctions imposed by Trump it will again subject its nuclear program to the limits of the nuclear deal. If the U.S. does not lift ALL sanctions then Iran will continue to exceed those limits by ever growing margins.

Secretary of State Anthony ‘Pompous the second’ Blinken has the illusion that he can get Iran back under the nuclear deal and keep significant sanctions in place. He wants to use those to press Iran into limiting its missile force and into ending support for its allies in the Middle East:

If the U.S. does not return to the nuclear deal anytime soon Iran will leave it completely. My guess is by the end of this year. That would free it to do whatever nuclear it wants to do. Iran will also increase its support for proxy forces which are able to hurt U.S. forces and U.S. allies in the Middle East. A number of ever escalating needle pricks - burning Saudi tankers, exploding refineries, drone attacks on U.S. bases - would necessitate for the U.S. to stay engaged.

The U.S. can not go to war with Iran. The country can not be occupied and any bombing of it would be responded to by missile and drone attacks against each and every U.S. base and ally in the region, including Israel…

A stand off or low level conflict could thus continue for a long time. It would consume more U.S. resources and management time. Time China can use, undisturbed, to further develop its capabilities. By adding more and more demands for the lifting of the sanctions against Iran the Biden administration is sabotaging its overarching strategic aim of competing with China.

Iran will also increase its support for proxy forces which are able to hurt U.S. forces and U.S. allies in the Middle East. A number of ever escalating needle pricks - burning Saudi tankers, exploding refineries, drone attacks on U.S. bases - would necessitate for the U.S. to stay engaged.

Or just quicken the energy transition to natural gas and renewable energy. The US electorate is more up for green energy than ever before, more conflict in the Middle East will just drive up the price of oil and hasten the transition already taking place.

The U.S. can not go to war with Iran. The country can not be occupied and any bombing of it would be responded to by missile and drone attacks against each and every U.S. base and ally in the region, including Israel…

Yeah, good luck with that. 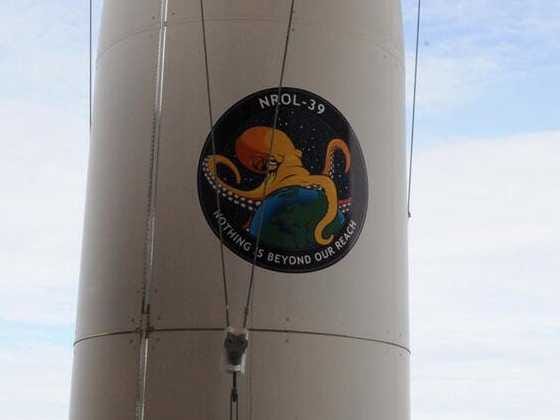 The secretive National Reconnaissance Office releases a new logo that has a lot of people talking.

I think it’s a good question of whether we should stop-- but I doubt we will.

It’s very convenient to just blow up “bad guys” whenever we feel like it.