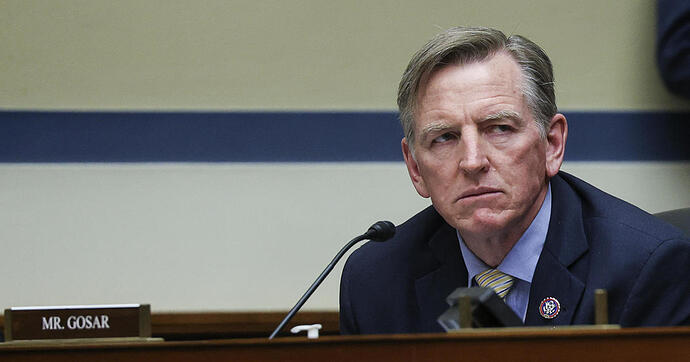 Gosar is the 24th lawmaker in U.S. history to be censured.

Washington — The House voted on Wednesday to censure Republican Congressman Paul Gosar of Arizona and strip him of his two committee assignments after he posted an edited anime video to his social media accounts that depicted violence against Democratic Congresswoman Alexandria Ocasio-Cortez of New York and President Biden.

Voting to censure a Republican and strip him of his committee assignments for making social media posts depicting him killing a fellow House member and committing acts of violence against the President, and apologizing not apologizing apologizing (but not really apologizing) for it: reprehensible, according to House Republicans not named Liz Cheney or Adam Kinzinger.

Voting to strip a Republican of commitee assignments for voting for a Democrat-backed bill: right and just and necessary, according to House Republicans not named Liz Cheney or Adam Kinzinger or any other GOPer who voted for it.

I fully expect the GOP to censure AOC, Omar, Tlaib, Pressley and Bush at first opportunity, for all kinds of imaginary kook shit. Possibly a few others, but those 5 will probably get censured weekly as the GOP stands near the well to point and laugh during photo ops.

Seems appropriate to me. Not illegal, but not how you treat a colleague. Play nicely in the sandbox.

Is he the guy whose siblings all told people not to vote for him because he’s crazy?

His sister referred to him as a “sociopath”. 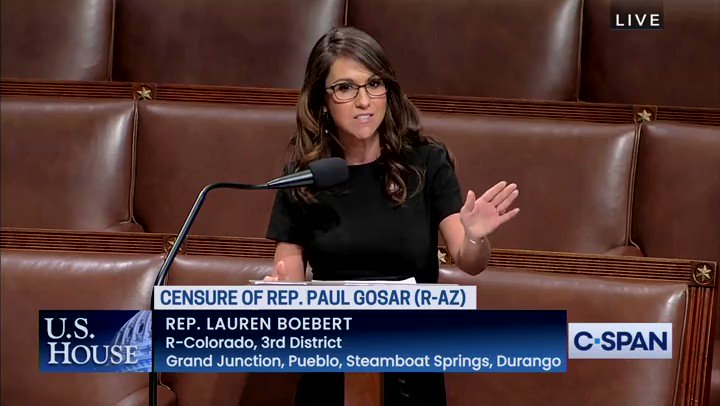 @atrupar
Boebert labels Ilhan Omar a member of "the Jihad squad" and smears her with unfounded conspiracy theories https://t.co/lhOIPJRlgG

"We should not condone violence, but" -- Louie Gohmert pic.twitter.com/q2JzJN5V3b

Qbert had some words on this.

Brother recently used the terms “dangerous, unhinged, reckless” or in other words your typical Republican congressman.

Gosar retweeted the same video again after censure, so I doubt this effort will do anything.

Gosar also looks like something may be physically wrong with him. 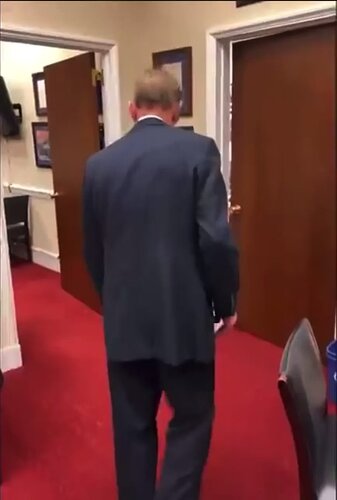 @RonFilipkowski
Paul Gosar, who has repeatedly denied he is suffering from a serious medical condition, returns to his office from the House floor after being censured, and is slurring his words and can’t stop twitching. https://t.co/78OR1XjXMc
1 Like
Lucy November 18, 2021, 2:13pm #10

So… I agree that it’s not a good look for a congressman to be censured mostly by the opposing party. But since the Republicans didn’t do anything when one of their own made a video that could be prosecuted as an illegal threat against the life of the president if it had been made by a nonentity, what do the Republicans on this board think SHOULD have been done?

(The child of a friend made a much less serious threat against the life of a president, who was going to visit the kid’s college campus. I forget which president, not really relevant. The kid was jailed as soon as it was discovered. His father had to fly out to the college and it took a few days to get the kid out of jail. My guess is that person will never be able to get “TSA-pre”.)

It was not even 3 years ago that the House of Representatives voted 424-1 to rebuke Steve King (R-IA) over his comments supporting white supremacy (after several months and years of similar statements). The vote against was from Bobby Rush (D-IL) who wanted King censured instead of merely rebuked. House Republicans also stripped King of all his committee assignments, and McCarthy stated that such viewpoints had no place in the Republican Party.

Today? A number of House Republicans openly profess white supremacist ideas and seek to strike out against anyone who objects.

Republicans voting party before country again. Gosar using the language and imagery of dehumanizing an enemy similar to pre-war propaganda to ease the populace into violence against elected Americans.Cheney getting kicked from the party by her state for not conforming to the party. The Republicans are nurturing a fascist beast they think they can control and ride into power.

They are all getting primaried unless they go all in

Blech. Seriously, these people need to grow a fucking spine or go hold down traffic barrels on the highway. (Which, some of them are probably underqualified to do as it is.)

Haven’t you noticed? Stupid has been winning recently.

Yeah, I know. And I hate to admit it, or maybe to inform others, but stupid outnumbers smart in this country right now. Or at the very best, they’re catching up in numbers and the smart crowd is standing around indifferently like everything is fine.

Yup. Seems we had been near the tipping point for a few decades, and finally surpassed it recently

Haven’t you noticed? Stupid has been winning recently.

Yes I noticed. Biden is President, Pelosi is SoH, and Schumer is majority leader.

Seriously though. Gosar should have been rebuked. I haven’t read up enough to know if he has the kind of history King did. That a**hole just kept going and going. This was most definitely in poor taste, but I can’t take a badly edited clip from Attack on Titan as a serious threat. Removing him from committee assignments seems like an overreaction.

If he has a long history of this type of behavior that would be different. Honestly Maxine Waters has done worse in more volatile situations.

They have been around forever. Not born in the age of stupid like MTG, Boebert, and Gaetz who will soon be the center of the party.