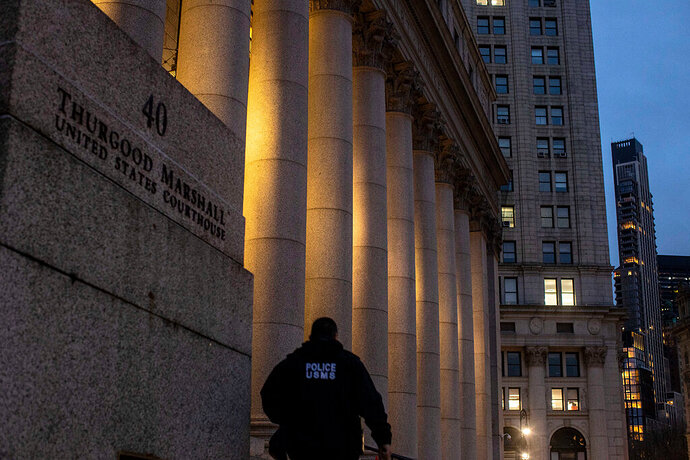 The juror’s statements to the media had clouded the sex-trafficking conviction of Ms. Maxwell, a longtime companion of Jeffrey Epstein.

A Manhattan judge on Friday denied Ghislaine Maxwell’s request for a new trial, rejecting her claim that a juror’s failure to disclose his personal history of being sexually abused as a child had deprived her of a fair and impartial jury.
…
Ms. Maxwell had sought a new trial after the juror, identified as Juror 50, revealed in interviews with the news media that he had told other jurors during deliberations about his history of being sexually abused. One article cited him as saying he helped the jurors see things from a victim’s point of view.

I thought we had a thread discussing this, but I didn’t find it searching for “Ghislaine” or “Maxwell”. This still seems very wrong to me, even though I expect she would correctly be found guilty at a new trial. One relevant factor, from the article, is that several other jurors acknowledge some history of sexual abuse and were not stricken, so it’s quite possible this juror would still have continued had he properly disclosed his history.

When I have jury duty, I don’t say anything to anyone that isn’t required of me. Of course, I don’t lie on questionnaires, either.

It is her lawyer’s fault if the question wasn’t directly asked and they think it is important. It is not the juror’s responsibility to offer up information the defendant might think is important.

If it was directly asked and he lied, then I could see there being cause for a mistrial.

If it was directly asked and he lied, then I could see there being cause for a mistrial.

I think this was the case. The question about whether the juror had suffered sexual abuse was answered incorrectly. Then it became a discussion point in the deliberations that the juror used to put context around victim’s(’?) testimony. Given those facts, I am somewhat surprised that the judge didn’t grant a mistrial, but I didn’t read the judge’s reasoning for denying it.

I think this was the case. The question about whether the juror had suffered sexual abuse was answered incorrectly.

It was asked on the questionnaire that all jurors had to complete, and he answered incorrectly,. (Potentially if he had answered correctly, he would have been asked additional verbal questions, or would just have been excluded from the jury. One observation that the judge ruling on this matter made: other prospective jurors had answered correctly that they had suffered sexual abuse and were not excluded, so perhaps this wrong answer was irrelevant.)

Thanks. I was wondering about that. It seems bonkers to allow the systemic exclusion of people who had been sexually abused, but it seems that wasn’t the case.

tangent - my son was on jury duty and the trial was going to be awful. he found the questions asked openly and publicly to be 1000% insensitive.
“Have you ever been the victim of physical or sexual abuse?” Answers provided verbally in front of everyone.
“Has one of your family members been murdered?” One guy says “my cousin was one of dahmer’s victims.” (free to go now…)

The case was a child care worker charged with beating death of a 1 or 2 yo. was a big case locally. fortunately for him, change of plea avoided trial.

But, agree with the points above - you have to answer the questions honestly.

You could probably be difficult and say “I don’t want to talk about that.” I don’t know what threshold a juror would have to cross to be found in contempt, but I imagine they might be able to get disqualified without being found in contempt for refusing to answer questions on a sensitive subject.

I once sat for jury selection on a trial that was expected to go 6-8 weeks and the jury would be sequestered. [t was a retrial; the 2nd trial ended up going ~5 months, and then the verdict thrown out on appeal because of an incredibly inane reason. No idea if they did another trial beyond that.] There was one guy who was very vocal in his complaints about having to be there and that he wouldn’t serve on the jury for it. As the jury was being polled generally - do you know anything about this case, do you know ____ who may testify at trial, what are your feelings on ______ - who answered “yes” on everything. I mean, everything. Questions would be asked in opposite directions, he’d answer yes to both. Did that through about 60 questions.

Needless to say, he didn’t get picked. The berating he took from the judge in her chambers as he was questioned on his responses was audible throughout the courthouse. Inexplicably, he wasn’t found in contempt.