Ganna put some money on him?

Is this your drag name?

I think he’ll do it, he probably would have pulled out if he wasn’t feeling good.

Is that tomorrow? Is it on USA?

I don’t know what this means and Google isn’t helping.

It’s kind of fun being one of the few people who understands, but for the rest of you:

Filippo Ganna is an Italian professional bicyclist and he is going to attempt to break the one hour record: that is how far he can ride on an indoor track (aka velodrome) in one hour. I think the attempt is this weekend. Google tells me the record is 55.548 km held by British cyclist Dan Bigham.

Curious why he did so poorly in the worlds (7th) this year after winning the last two.

I don’t know that 55 seconds back in a race that takes over 40 minutes is “poorly”. But I do know that his training this season has been focused on the hour record, which means training indoors, not out on the road.

Ok, I’m reading that this will be broadcast for free on the Team Ineos Grenadiers YouTube channel. 2 PM EDT today.

Apparently Bigham, the current record-holder, is a Team Ineos Grenadiers engineer and Bigham is helping Ganna break his own record.

Also the technology going into this is considerable. 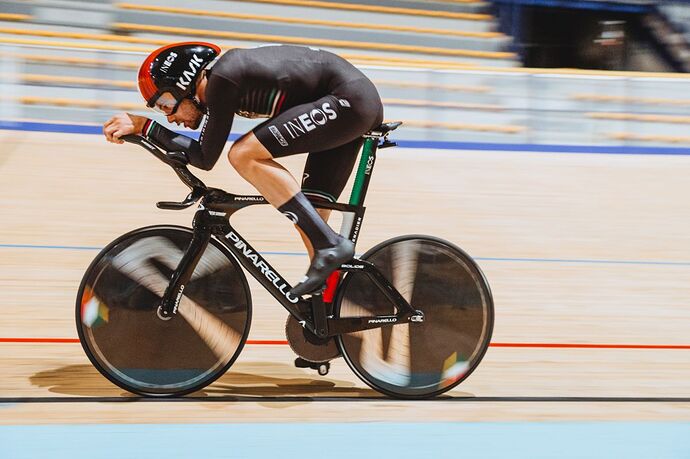 Setting a reminder to watch…

But it might be more exciting if he keeps pace with the record, unlike Dowsett who was clearly down the whole time.

Yeah, if 20 minutes in he’s clearly not going to do it then I will probably lose interest. Even so, I could have it on while I’m folding laundry or something. Hmm, I should start some laundry now so I have some to fold in two hours.

Also he said his strategy is to conserve energy during the first half and go all out second half.

I assume when they’re comparing it to the current record they’ll show Bigham’s actual progress that deep in rather than showing Bigham’s total distance divided by the elapsed time as if Bigham were going the same pace throughout.

So far so good.

they’ll show Bigham’s actual progress that deep in rather than showing Bigham’s total distance divided by the elapsed time as if Bigham were going the same pace throughout.

That would be good.

Yeah that’s exactly what they’re doing, but also showing his speed from the get-go.

Wow!!! That was awesome!