GA has HB 531 passed in the GA house on a partisan line and is now heading to the senate.

Some of it’s measures:
Perhaps the biggest relative to the last election is to end no excuse absentee voting. Only senior citizens, people with a disability, and people out of town will be eligible to vote absentee.

In my opinion many of these seem more about creating obstacles to vote rather than allegedly increasing security. Why restrict counties from having early voting on some days? Why not allow counties to use buses as temporary early voting locations? Why ban people from giving out food or water in places with crazy wait times? These measures certainly have nothing to do with election integrity. Disqualifying provisional ballots cast in the wrong precinct really doesn’t either if those provisional ballots are later determined to be legit registered voters.

No excuse absentee voting was certainly helpful during a pandemic. I can see arguably that doing away with that could make it more secure, but it’s a solution in search of a problem. There is no evidence of meaningful election fraud via absentee ballot in GA. The “drop box in secure early voting locations” may sound reasonable, but in effect forcing people to go to an early voting location during business hours removes one of the benefits of having drop boxes available. Drop boxes weren’t a thing here before the pandemic created massive demand for absentee voting, so hopefully this hurdle isn’t material. Eliminating no excuse voting will hit those doing so due to lack of transportation the hardest. We can speculate on the demographics of that population.

Eliminating signature matching and going with a driver’s license number for absentee voting might add a tiny bit of security, but it will be at the expense of those at home without a DL or a computer. Not sure how many people that represents but I can imagine it’s heavily skewed towards one party. 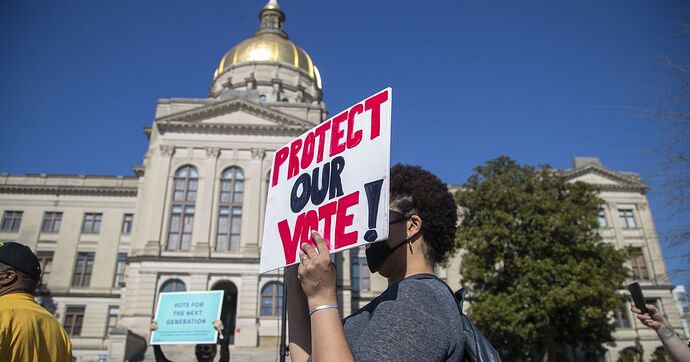 I like the “no outside funding from non-profits” bit although it definitely seems aimed at the massive funding thrown at Democrat-won Senate elections.

The rest is blatant voter suppression.

This part isn’t aimed at funding of campaigns themselves, but rather at any non-profits that may be funding election administration. Examples: keep money from About CEIR | The Center for Election Innovation & Research or https://www.techandciviclife.org/# from helping support free and fair elections.

The restrictions on Sunday voting are a direct hit to the “souls to the polls” drives where many predominantly black churches offered free rides to early voting centers after church.

To me, the one about provisional ballots in the wrong precinct being disqualified is the dumbest by far. Isn’t that conceding that people who were properly registered to vote and took the time to vote in person are disenfranchised?

The ban on “outside funding of elections from nonprofit organizations” seems so strange. What nonprofits fund elections, and why, and why ban it? If this were restricting their funding of campaigns, maybe (just as current federal law prevent some lobbying supported by tax-deductible donations). [sort of ninja’d on this one already]

Isn’t that conceding that people who were properly registered to vote and took the time to vote in person are disenfranchised?

This one is quite sensible and I had mentioned it was something GA should do even before I knew that anyone in the GA legislature was considering it.

We had 99 Senators for a bit because the regular GA Senate race went to a runoff scheduled for January 5. But the Senate term started January 3. And it was a bit before GA had tallied and certified the results and then even longer before the Senator-Elect got to DC and was sworn in.

Runoffs should happen in December, not January. There’s no good reason for such a delay in this day & age.

I mean, I suppose instant runoff is a better and cheaper option so if you’re changing things up at all, might as well go with that. But a December runoff is certainly better than a January one at any rate.

I should add that GA had a runoff for both Senate seats in January. But the appointed GA Senator who was off-cycle didn’t automatically lose her seat on January 3rd, since that term hadn’t ended.

So while she ended up being a Senator for a month longer than she would have been under the pending legislation… the January runoff didn’t cause that Senate seat to ever be vacant. Only the regular seat.

Agree that moving up the runoff schedule is a sensible provision of the bill. Maybe the only one.

Maybe the only one.

Yeah, I’m not seeing a lot else to like.

One thing that Oregon does right (and you may recall that I’m rather critical of vote-by-mail in general, but this is one of those “if you’re going to do it anyway, at least do it right” kind of things) is that people can drop their ballots in the book return at public libraries 24/7. I’m not sure if it’s every library or only certain ones… certainly the main library downtown had this at any rate.

But that’s reasonably secure: the library is locked at night and only a limited number of (government) employees could access the book return.