Ever done it? Like it? Ya got preferences to the type or places?

I fished a fair bit when I was young. I haven’t done it hardly at all in the last 20 years though.

Almost exclusively trout, small lakes and streams. I don’t think I have ever caught anything using bait - just lures.

I had a float tube. I wonder if it is still at my parents house somewhere…

I used to fish a lot. I used to live a block away from Sandy Hook Bay, and would just walk down the street to the jetty and fish.

Plus, I’m about 2 miles from the ocean, so we’d go a couple hours before high tide and fish until about an hour, hour and a half after the high water mark was hit.

These days, I get out a few times a year.

That reminds me. Striped bass are in, so maybe this weekend I’ll try to catch some dinner. Nuthin’ better than a fresh striper or bluefish on the grill…

We fish for bass/pike in northern ontario lakes, and for perch/walleye in Lake Erie. Walleye from Lake Erie is the best tasting fish there is.

My tackle box just died. It always seemed to be messy anyway, so I’m putting together a milk crate tackle box (not my pic): 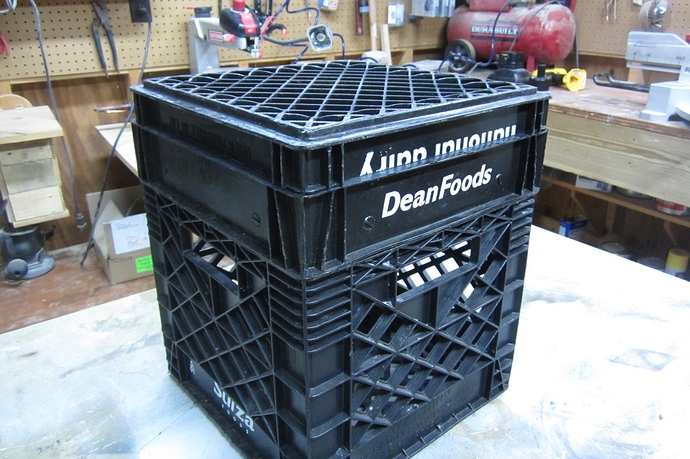 I bought some Plano 3600 containers that fit well inside that, to keep the tackle organized. In the lid I’m going to find a tupperware container or something that’ll hold my filet knives and pliers.

Added, so I asked my wife if we had any Tupperware containers that would fit. I was advised that even if we did, that I couldn’t have it.

Yes I love to fish, freshwater baitcasting, spinning, and fly fishing. Not in to saltwater much. I fish mostly for bass in the local lakes and ponds and head to the mountains a few times a year to fish for trout.

Lots as a kid, at the lake, or on one of the various rivers, streams, creeks near where I grew up. Haven’t fished once since I moved away at 17. That’s a little depressing to think about.

Added, so I asked my wife if we had any Tupperware containers that would fit. I was advised that even if we did, that I couldn’t have it.

well, no one will be able to use it for anything else, ever again, after you use it that way. So it makes sense to get something for that purpose, and not steal one of the food containers in regular use.

I used to fish all the time as a kid, but I rarely do as an adult. Last time I went fishing was maybe 2 years ago, and the time before that was at least a few years ago. I don’t really have close friends or family that like to fish much, and when I was a kid it seemed a lot of my friends liked to fish.

I do enjoy watching River Monsters on occasion, so there’s that.

I fished a lot of inshore as a kid and hadn’t for a while. Over the last year I’ve taken up bass fishing and I’ve become obsessed with it. I’ve got 3 different baitcaster rods and an ever growing tackle supply. Was going very well in the Spring, but then the Summer came and the bite went away. Slowly picking back up now. I find it hilarious that there’s a fishing thread here, but there was never any on AO.

I am trying to convince myself to get back into fishing. It got away from me about twenty years ago. Over the years in a few purging things I don’t use efforts I have no gear. I will need to start from scratch. There is a nice creek less than a mile from my house. After talking to a grounded commercial pilot coming off the creek he said its a nice place for blue gill and bass. Got me thinking I should go fishing again.

Did quite a bit of it growing up. Lake and stream fishing mostly with live bait.

Brook trout was the favorite (close second to brown trout); but it was mostly stocked rainbow trout. (We did occasionally catch a wild-raised rainbow, but it was rare. For those wondering how you know the difference, it’s in the way the flesh cooks up; stocked fish would be a bit more “mushy”.)

My dad and brother have always been obsessed with fishing (and hunting as well for bro).

I’ve never understood the appeal, honestly. I mean, I enjoy being out on the water on a nice day, but after about 10 min I’m completely bored with the fishing aspect. Give me a good book to read, and y’all have fun holding those…sticks…

I think a lot depends on the individual and what they’re really trying to accomplish. As a youth, I didn’t really care for lake fishing for the reasons you stated, but loved stream fishing as it was far more active.

But most people that I know that like “stationary” fishing also enjoy having “quiet time” to think/ponder/reflect as well. And fishing has an element of food tied with it as well.

As for hunting, the appeal there is often the “thrill of the hunt” . . . can one do better than a “wild animal”? Growing up, hunting was our family’s main source of meat. I ate deer and elk meat like most people eat beef or pork. One elk would provide enough meat for about 6 months for a family of 4. A deer would provide about 3 months.

Sure didn’t work that way on Oregon Trail!

But yeah, I’ve heard the “quiet time” expressed by both of them. I’d just rather do that at home in bed (or go for a walk), or have something to entertain my active mind while blocking everything else out. Diffn’t strokes…

As I mentioned, I think a lot depends on the person. In my case, I love being in the mountains. Hiking probably tops my list of activities to do there. And at my age, fishing will likely be next.

Hunting would still be fun (IMO, YMMV) . . . and still have the connections to get to some good places w/o competing with idiots*.

*Generally the “sportsmen” hunters who do it for “the trophy” and usually don’t bother with observing fenced off private property thinking it’s all public lands.

Growing up, hunting was our family’s main source of meat. I ate deer and elk meat like most people eat beef or pork.

How does wild elk taste?

I’ve had deer and elk at restaurants, but I’m pretty sure it’s farmed. (For reasons having to do with the USDA.) I’m not wild about venison, but I thought elk was delicious.

It’s no where near as gamey as venison. If someone wasn’t really paying much attention you might be able to pass it off as beef (but a lot less fatty).

One year both my brothers each got an elk. For some reason I’m thinking my dad did too - but I’m pretty sure I am wrong about that. Either way - it was a LOT of meat. Had to borrow freezer space from friends and family to store it all.

Yeah, I remember thinking the farmed stuff tasted quite a bit like beef, but… different. I described it as “I think anyone who likes beef will like elk”. But I wondered if the wild ones are a lot gamier than the farmed ones. I guess not.