There, I did my small part.

So if a woman lies about being on the pill, or sabotages contraceptive measures, is that also a crime? Or do the rules only apply to men?

I don’t know if it would be assault since there’s really no increased chance of physical injury.

But I absolutely think that if it can somehow be proven that a woman deceives her male partner about birth control (lies about being on the pill or having an IUD, uses a diaphragm without spermicide, etc.) then that should absolve the guy of responsibility for child support. It would be difficult but not impossible to prove, of course. Better to err on the side of making the guy pay the child support. But if there’s no doubt about the deception then that’s all on her.

So if a woman lies about being on the pill, or sabotages contraceptive measures, is that also a crime?

Of course, I suspect courts and juries would apply this concept unevenly.

I agree. But I think conditional consent creates issues of interpretation and reasonable expectation, which the linked article addresses.

If my partner insists on using a condom, and we do so, but it turns out the condom was past its expiration date, does that make me a rapist?

What if she only wants to have sex outdoors “under the great blue sky”, and it turns out the sky was orange that evening?

If it helps this was a court in Canada where common sense would be taken into consideration.

The operative word in my opinion is “willfully”. Simple accidents shouldn’t carry the burden of criminal liability, although I suppose there’s the question of whether a threshold of negligence may be crossed…

May take some flak for posting this article but, WTH, that’s what a discussion forum is for.

I have pasted some excerpts below but included the link to the full article if you can circumvent the firewall.

“ Much has been written about the difference between Canadians and Americans. Tomes such as Seymour Martin Lipset’s classic, Continental Divide examined the many distinctions. Mr. Lipset’s work traced the contrasts back to the responses to the American revolution, when Canadians remained loyal to the British Crown.

The influential sociologist charted how Americans were more individualistic, suspicious of institutions and government power, while Canadians were more collectivist and deferential.

But in recent times it’s become clear that we’ve missed a critically important distinction between the two countries, one which helps explain why American democracy threatens to go off the rails while the Canadian system, warts and all, remains relatively stable.

The difference is in the level of gullibility of the respective populations. Americans have become remarkably vulnerable and prone to myths, conspiracy theories, alternative facts and the charlatans who peddle them. They’ve been imbibing snake oil by the barrel. To the point where, as Kurt Andersen puts it in his book Fantasyland, “The irrational has become respectable and often unstoppable.” To the point where “the reality-based community,” to use a term attributed to an official working with Karl Rove, is imperilled.

While Canada is by no means free of the problem, there is no comparison in terms of degree. Canadians are much less susceptible to falsehood bombardment, and nowhere near as politically exploitable. We’re taken aback by the gullibility, primarily on the conservative side, of such vast numbers of Americans. They’re being suckered into believing “the big lie” about the past presidential election being stolen from Donald Trump is but one example.

Religion plays a sizeable role. Many religious people are less accepting of science and easier to exploit. Americans are more religious than Canadians, with more than double the percentage of Americans praying daily. Donald Trump had the backing of an estimated 80 per cent of evangelicals.” 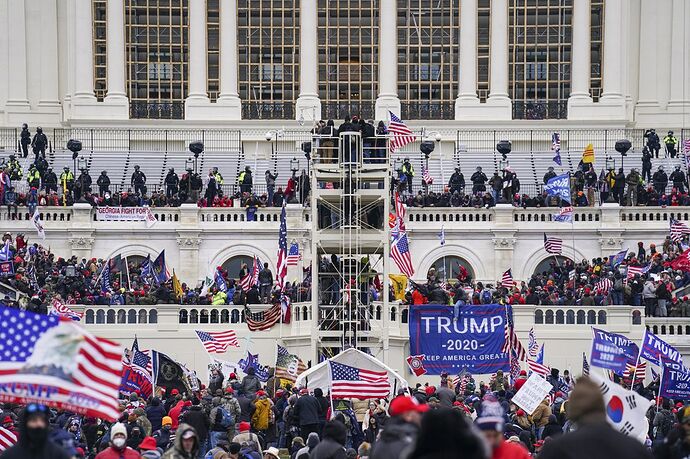 Opinion: Americans are more gullible than Canadians when it comes to falsehoods

The power of right-wing demagogues over public opinion was instrumental in the Jan. 6 upheaval. It is creating a crisis in American democracy

I suspect that the problem will continue to worsen in Canada too. I’m not sure what the solution is.

I mean, stronger libel/slander laws would help, but I’m not sure that’s the full solution.

Sorry to disappoint you but not seeing a lot to disagree with in the gullibility article.

We have Fox News which validates the right wing stuff. My understanding is that there is no such major media counterpart in Canada. Crazy stuff tends to get shot down in the Canadian media.

I also think drawing a clear line between news and entertainment would help.

If you want to be news then what you say has to be factual. None of this “it’s obviously satire” when you get sued for defamation.

If you want to be able to spread lies then you don’t get first amendment freedom of the press protections such as being able to keep sources confidential. And you don’t get access to “press only” areas.

I suspect that the problem will continue to worsen in Canada too.

Sadly, I fully agree as I have noticed the right wing fringe being emboldened here after Trump got elected in 2016. Canada does tend to import the worst of the cultural trends from the US. Our best defence is strong media that speak the truth and call out the falsehoods.

America has by far the most influential movie industry (and a good chunk of tv). It is well-versed in telling a good story.

Never let facts get in the way of a good story.

The difference is in the level of gullibility of the respective populations.

Is the difference the level of gullibility inherent in the two respective populations, or is that merely an effect of differences in the two systems?

In the US, “freedom of speech” is one of our most cherished rights. Unfortunately, our reluctance to constrain free speech gives rise to the propagation of idiocy, fueled by infotainment that can be pretty inflammatory and fictional, and the effects of perpetual campaigning that helps aggravate the increasing toxicity of politics down here.

While Canada does acknowledge freedom of speech, there are constraints on free speech north of the border that would be considered intolerable in some circles south of the border. (E.g., consider the differences in what is allowed when it comes to political campaigns…)

The difference is in the level of gullibility of the respective populations.

Where we get the same problems in Canada, it’s where we have pockets of the same thing. In the two rural/conservative areas that I’m familiar with, you can divide the ‘conservatives’ right down the middle - mostly fiscal conservatives, and the socons with all this other stuff. And the dividing line in the conservatives is ‘are you evangelical christian’.

I know numerous conservatives who despise all this stuff that’s going on. And I know of a few that are likely on board - and those few are at specific churches.

There’s just a heavier concentration of these folks in the US than in Canada.

And I know people don’t like that being called out, but IMO it’s the root cause of many of the problems in the US, and to a lesser extent, in Canada.

The advertising standards in the U.S. versus Canada are appallingly different to me. For example, getting mail that looks fairly legitimate in terms of my “car warranty expiring” is just blatant manipulation and I’ve never seen anything close to as bad as that in my Canadian life.

Do we need stronger laws, or do we just need more lawsuits, or threats of lawsuits?

Dominion got a few people to shut up over the 2020 election. Hillary made a threat in a speech and shut down whatever conspiracy was bubbling up around this ~ time last year? I forget what that was about specifically. Alex Jones was just ordered to pay 45 million for his bullshit. “They can’t do anything to stop it, it’s free speech” seems to hitting some real limits, at least financially.

Do we need stronger laws, or do we just need more lawsuits, or threats of lawsuits?

Based on the unsuccessful lawsuits, I think we need stronger laws.

NBC slandered George Zimmerman and got away with it. Now, Zimmerman is perhaps a murderer, certainly an idiot, and admittedly unsympathetic. But nonetheless, he did NOT utter the sentence “he looks like he’s up to no good; he looks black” as NBC aired. That should actually be criminal, in my opinion, with people behind bars. That’s a pretty horrendous lie to tell about a person. Not only were there no criminal charges, but they won the lawsuit Zimmerman filed against them.

CBS / Dan Rather slandered George W Bush in the Killian document scandal and faced no legal repercussions for it. Again, as one of the most unpopular presidents, he’s not a very sympathetic victim. But the documents were clearly forgeries and CBS clung to the lie that they had authenticated them for two weeks. No legal repercussions.

Fox News has doctored numerous photographs, including editing a person carrying a rifle into a photo of the “Capitol Hill Autonomous Zone”, and editing Donald Trump out of a photo with Jeffrey Epstein and Ghislaine Maxwell. No legal repercussions.

Tucker Carlson slandered Karen McDougal on his show on Fox “News” and then his lawyers successfully argued in court that no reasonable person would believe him when he says he’s presenting “facts”. But once again, the slandered person - a former Playboy model who had an affair with Donald Trump - is not a particularly sympathetic figure.

Is the standard “it’s ok to lie about people you don’t like; you only have to be truthful about people who share your political views and won’t embarrass your preferred candidates”?

BTW, I know that in some cases people were fired. That’s a small step in the right direction. But there were no repercussions from our legal system for lying. That’s a problem.