Hope all y’all are safe up there.

A section of the Trans Canada Highway in BC was completely washed away in a record-setting storm that battered the province this week.

Aerial photos from BC Ministry of Transportation show a missing chunk of Highway 1 that’s supposed to pass under a railway track near Lytton, BC. 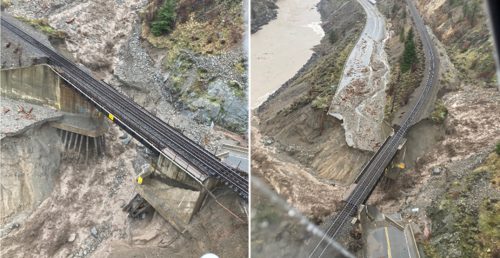 Aerial footage captures extent of flood devastation on Trans Canada Hwy in BC...

Sections of the Trans Canada Highway through BC were completely washed away by flooding and landslides in a record-setting storm this week.

Lytton BC, the same town that burned to the ground this summer, now floods. Watch out for locusts there soon…

Watch out for locusts there soon…

I heard that the plague d’jour are scorpions this year . . .

It’s pretty bad here. No rail or highway routes are open going east from Vancouver. The BC dairy industry in the Fraser Valley has been devastated by flooding. Thousands of farm animals are feared dead. And heavy rain forecast again next week. Some cities received a foot of rain in two days.