Bridge: what do you do on this auction, with a bot?

You elect to open 1NT despite the good 5 card spades and the low doubleton diamond. Do you agree? The result would certainly be different if you had opened 1S.

What do you call now? Unfortunately for this thread, I did not check what various calls would have meant, but don’t think any potential meanings would affect your call, except that it might be nice to be certain what redouble would mean. Not the call I chose, so I cannot see the meaning now.

Full deal to be revealed tomorrow, if anyone has responded.

I do not agree.

All prior disclaimers that I’ve disclaimed on the AO are applicable here.

Explain your 1NT over 1S.
W’s 2H bid (assuming you are S) tells me your hearts have just lost value. Now you have to hope that your partner can cover diamonds.
Your later spade bid might tell your bot that you have only four spades, else you would have bid spades first with five.

It would also meet the definition of a 1S opening, which would be something along the lines of 5+ spades, 12+ points. Nothing there to tell us which hands that meet the requirements of both should be opened 1S, which should be opened 1NT. The diamond holding tends to make 1S more attractive, but many times we open 1NT with a worthless doubleton. If the long suit were clubs or diamonds, opening 1NT would be virtually unanimous, even though the hand would also meet the requirements for 1 of a minor.

Anyway, even if you wouldn’t be in this situation because you would have opened 1S, unless you think 1NT is beyond the pale, you could reasonably decide what do after this start. (You could also note that even if someone had given you the hand to complete after opening 1NT, you would not have rebid 2S next. Maybe not, but unless 1NT and 2S are totally off the wall, you could opine now. Again, perhaps someone had handed you the cards to complete the auction after it had gotten this far.)

I said I would post the full hand today if anyone had responded, but I intended “if anyone had said what to do after the Dbl - P - P.” So tomorrow if anyone has, by Monday even if no one does.

BTW, two years ago I would definitely be in the open 1S camp. Now I consider it close, but probably would open 1NT even with a human partner. If you open 1NT, you’ll usually get to a reasonable contract, which may be 1NT. If partner has fewer than 3 spades, 1NT will usually work better. If he has 3 or more spades, opening 1S probably will. Since on average partner will have 3 spades more often than 2, that would tend to support opening spades, but not that clear: opening 1NT is not better 100% of the times that partner does not have 3+ spades; opening 1S is not better 100% of the times he does. The advantage of 1NT is simplicity; you rarely have a tough rebid decision after 1NT, but after 1S you don’t know how aggressive to be. Similarly partner has a pretty good idea of your hand, so he can make pretty good decisions.

This thinking is perhaps influenced that IRL I’ve been playing the Precision Club system a lot. In that, virtually all hands with at least 16 HCP are opened 1C (forcing, artificial). 1 of a major promises at least 5. 1NT (in my current partnerships) is 14-16 HCP (those balanced 16’s are the largest group of 16 point hands not opened 1C). Almost all hands with at least 11 HCP are opened. In that style, it works best to open 1NT frequently with a 5-card major, since otherwise you have too many rebidding problems. (Partner has to be carefull about inviting when you could have as few as 11 or 12; partner won’t be seriously misled if you invite with 15 after opening 1S since he’ll know you have at most 15, but your invite may have already put you too high).

So, in Bridge, I’m allowed to punch the guy in the face after he gives me this hand to complete the bidding for him?
Looking at my “Goren’s New Bridge Complete”… YES! Page 753!

Your alternative is to bid 4C, letting your bot play, and allow E to lead a Heart through your KJ.
Or, 3NT, as your partner requested/forced. Puts W in the lead, so his 4th heart (or T from AQT983) gives you the J. Put him in the lead again (and not E) you’ll get your K as well.

I generally always open 1S rather than 1NT, but only open 1H with 12-14 or 17+.
It annoys me to no end when I want to penalty double a bot and find out it’s takeout when takeout seems ridiculous.
Another thing that is annoying - you make a Michaels call, and want to drive to game. The bot expects you to have 25 or 32 hcp and jumps to slam and down you go.

Some more information for those of you (all of you) who wanted to open 1S. One deal proves nothing, but 1S does not solve your bidding problems. The hand is from the daily tournament (matchpoints, favorable vul). It was played 153 times. 36 opened 1NT, facing the first rebid question I faced (what to do over partner’s 3C).

117 times it was opened 1S, with second hand bidding 2S (Michaels, hearts and an unspecified minor), partner passing, and RHO bidding 3H. Now you have to decide what to do at the 3 level, with partner knowing about your 5 spades but you have at least some more strength than you promised. You know nothing about partner’s hand, except that he didn’t have a good non-pass action over 2S.

You obviously might decide to pass. Or to make a takeout double (showing 5S, at least 3C, at least 3D, 16-22 points). A semi-reasonable description, but far from certain your side has a safe spot above 3H, and you only have 2 diamonds. Or perhaps you would bid 3S (showing 6+ spades, 15-22 total points). You only have 5 spades, but they are good spades. Or conceivably you bid 3NT, despite the weak diamonds and the likelihood opener has 5, since RHO preferred hearts and you have those stopped at least once. Trying to take 9 tricks might be another story. You probably have thoughts about which of those is best and may think some are awful, but at least one player did choose each of those actions. Whatever you choose, I doubt you’re confident of getting the best result.

Oh, I’m not confident at all.
Just one of those tricky deals that’s hard to find the “best result.” Bridge isn’t always easy to play. You have an opening hand, and LHO has an even better opening hand. Your partner or RHO has squat.

3H, doubled, puts all those HCP in dummy, so you and your partner know exactly what and where they are, if that’s an advantage.

3H, doubled, puts all those HCP in dummy,

Not right at all. 2S was Michaels, showing 5 hearts and 5 in a minor (either one, though if we on GoActuary instead of at the table know that if we had opened 1NT, LHO would only have shown at least 4 hearts and at least 4 of a minor, almost certainly at least 9 cards in the two suits) and CHO would have shown a good hand with clubs, so LHO’s minor must be diamonds. At the table, having opened 1S, partner passed, so we have only a suspicion that the minor is diamonds (since we have 3 clubs but only 2 diamonds). 2S over our 1S only promised 12+ total points (and most humans wouldn’t insist on that many), so LHO may not put down many HCP in dummy. The notes say that 3H shows at most 8 total points (but most humans wouldn’t consider 8 total points a strict limit). Most important, it’s nearly impossible that LHO’s hand will end up as dummy in a 3H doubled contract, since our double of 3H would the takeout. Partner is almost certainly going to bid something if we double, and we may not want to be playing a contract higher than 3H. (Since at the table having opened 1S we don’t know that partner this time has clubs, there is a reasonably high probability that doubling 3H would get a 4D response from partner.)

Some (not a majority) of the 1S openers did choose to double 3H on the next round. The final contract was never 3H doubled.

I would pass now. Good thing partner is a bot so no human to disappoint if I am really wrong.

Good thing partner is a bot so no human to disappoint if I am really wrong.

You are really wrong. As was I. Or maybe CHO was wrong? Lots of thoughts possible. 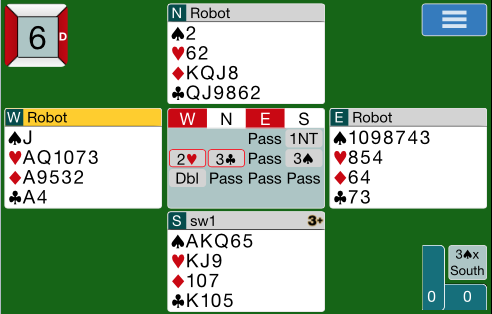 It seems very clear to me to bid 3S over 3C. I have a good 5-cards spade suit that partner has absolutely no reason to expect. And it makes me declarer, protecting the heart king from immediate attack. What I don’t understand is how the system notes suggest 3S could be only 4 spades. It’s much harder to see why we would bid a 4-card spade suit. (It might help if we knew more about the Lebensohl agreements, and partner’s options for looking for a 4-4 spade fit. I didn’t).

Anyway, when 3S is doubled and partner sits, it seems to me that my hand is about as good for spades as it could possibly be. If we don’t want to play 3S X here (as he certainly doesn’t, with just one), he should run. At least that was my thought at the time.

Maybe that thinking is flawed. He knows he doesn’t want to play 3S X, but what does he want to play? Should he bid 3NT with no heart stopper? Should he bypass 3NT even though I might have one? Or should be pass so that I can bid 3NT with a heart stopper and clubs if I don’t, me knowing that we don’t want to play 3S X when RHO has made a penalty pass? Or should he redouble for SOS if he wants to make sure we don’t play 3S X (maybe not in the bots’ vocabulary.)

I voted Pass originally. A challenging hand no matter how it shakes out.

And I understand the 1NT vs 1S ideas. And though the computer plays NT openers can have 5 of a major (explicitly says it!), doesn’t mean that we have to play that way, too.

You mentioned the 1m opening would technically qualify too, but I look at it as a progression:

In this progression, the only real decisions to make are

Pretty good rules, but it is not necessarily so simple, especially the choice between 1NT and 1 of a major. Rather than just formulaically “do you have a 5-card major”, considerations include:

Another conceivable question at times is “Is this hand too good for a premptive opening?”, even if it doesn’t have 12 points.

Finally, I would add that there are a few excellent players (in a style popularized by some Washington DC area experts) who would phrase #3 as

Do you have 12-21 points, and a five+ card major → open 1 of your longest major suit (the higher suit if two equal length).

Those players would normally prefer a 5-card major to a 6- or occasionally 7-card minor.

There are also some - not many now - who often open 1C with a minimum hand and 5-5 in the black suits, to make it easier to show both suits.

Thanks. Those are helpful clarifications.

Related - one time that I am hesitant to open 2c is if my suit is diamonds. Because partner often responds 2d, making them declarer. In this case, I’m more likely to open 1d and then show the strength in the next bid.