ETA: Lose to NN by 14. Win by 1 against procrastinator. Both reissued

Declare-only reissued now. Probably the other two reissued this evening, else tomorrow.

Win by 2 vs procrastinator, 10-8 with no swing more than 7. Win by 6 vs NN despite going down in a very poor slam that was going to make until I lost my mind overthinking it. With a trump holding of AKQJ107 opposite 65 (in dummy), I ruffed a club in dummy and RHO didn’t overruff. I tried to make it on a holding where he didn’t overruff because he had a lot of trumps and chose not to shorten himself. :duh: In fact, LHO had both the 8 and 9 and he couldn’t overruff.

EATA: Lose to procrastinator by 30. Win by 13 vs NN. Both reissued

EATA: win by 6 vs AA. Reissued

EATA: lose to NN by 8 when a misclick in a cold game costs 10. Lose by 18 to procrastinator in a match that made me wonder, if these were advanced bots, how terrible basic bots would be. One bot made an insane pass of 1S XX by them, the kind of thing I’ve been burned by bots on before. Cost 13 imps. OTOH a bot handed me 10 imps or so by going down in 3C X that surely should have made.

Both willl be reissued later tonight.

procrastinator runs away with the regular challenge with an astonishing +33.50. The only other positive score was +0.75. I thought I was having a great set in the declare-only, but procrastinator won it with 62.50%, with second place 58.59%, which was not I. Both will be reissued this evening, I hope (the two individual challenges I had planned to enter last evening didn’t get reissued until this morning.)

ETA: Lose to AA by 2, to procrastinator by 23. Both reissued

I win the declare-only with 59.11%, by 1.82%. oirg wins the regular challenge with 10.00 by 0.50. Not 100% sure what happened to my individual challenge against NN. Certainly I didn’t even start it, and it’s gone, so I guess time expired on me. I thought it was gone before time should have expired, so maybe something else went wrong.

ETA: Lose by 22 to procrastinator. Win by 18 vs AA. Both reissued

EATA: I win vs procrastinator by 8. I win by 6 vs AA, when bots let me make a slam which should not have made as the cards lie, though it’s not clear, except seeing all 4 hans, that their defense was wrong.

I figure that on that lead, opening leader “can’t” have the spade K, so even though it is exceedingly unlikely clubs are 3=3, I play for that. They weren’t.

NN, presumably also thinking it extremely unlikely opening leader has the spade king, but considering clubs 3-3 even less likely, ducked in dummy. No overtrick, and no game either. Preempter wins the spade king, underfeeds his diamond ace to partner’s K, and ruffs a club for down 1! Who ever hear of bots declaring that well? 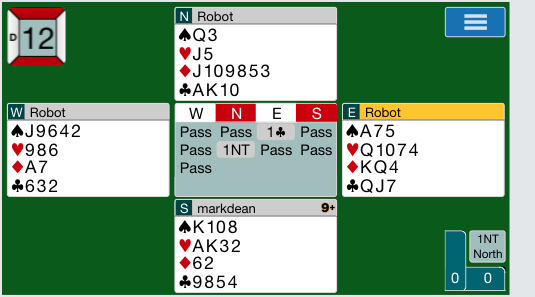 Low heart lead to the J at both tables. Misdefense, but not clearly wrong.
Diamond from declarer’s hand, won by East’s queen. Club Q, won by declarer. Diamond J led, double won: by East’s king, perforce overtaken by West’s A. Not good, and almost certainly east should have known to duck.

On lead, west plays a second club, won by declarer’s king. Silly me, I claimed 9 tricks. Procrastinator, probably aware what was going on, cashed his 4 diamond tricks, leaving this position when three diamonds are left. 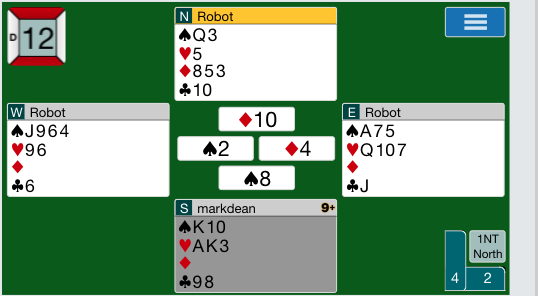 I chose to show the position here, since this is the last point before East made a fatal discard, but at this point he’s going to have to make 3 discards, and he’s doomed. He could safely toss 2 spades, but the he’s got to give up his (and the defense’s only) spade guard, club guard, or heart guard. Yes, the very rare 3-suit squeeze.

In face east gave up the heart guard on this trick, making 10 tricks. Had he instead given up a black suit guard, it would have been the even rarer \textcolor{blue}{\text{repeating squeeze}} Declarer could, after the diamonds, cash his established black suit winner (having pitched the spade K from dummy, if east gave up spades), which would squeeze east again in hearts and the remaining black suit for 11 tricks!

Fortunately for me, missing that opportunity only cost 1 imp, and I won the match by 10. Reissued.

Lost to @procrastinator by 9. Didn’t help that I lost 11 on a misclick during the bidding, ending up -3 with 3 NT making. OTOH, a misclick during the play of a different hand did help, 12 imps worth. That misclick should have cost me an extra undertrick, but the bots found a way to give me the game. Reissued

procrastinator wins the very low-scoring regular challenge with +6.00, just +.25 over both 2nd and 3rd. I lose to NN by 4. Both reissued

Can’t make first place in the declare-only much closer: a 3-way tie for first: oirg, procrastinator, NN each with 55.47%. In a 2-ways, I beat procrastinator by 17 and AA by 32. All reissued