Lose to procrastinator by 2. Reissued

Some REALLY strange bot bidding in day 1 of the 2-day weekend Survivor. I’ll post two auctions tomorrow. This isn’t a spoiler since even if you play today you might not see a deal I’m talking about, and since it’s a declare-only you wouldl see the auction anyway (from declarer’s viewpoint).

Apparently none of you played the challenge at all. If you had, you might have encountered these two boards.

Yes, I’ve heard of cheaper minor as a second negative, but then 3S is non forcing? I would have expected a rebid of opener’s suit to be the only non forcing suit bid.

Even stranger, that many people who faced this hand in a declare-only might not have noticed:

How can West, with a potential vul game available to his side sell to 4S undoubled when his partner freely introduced 3H? Surely partner has at most 1 spade, maybe none. Even if parter has nothing in clubs, and has only 4 hearts, he can almost certainly ruff his 3 spade losers in dummy (that’s even on a trump lead; on the expected spade lead he has only 2 losers to ruff.)

EATA: win by 6 vs AA. Lose by 2 to procrastinator. Both reissued

EATA: Win by 34 vs AA. Lose by 16 to procrastinator. Both reissued

ETA: I win the declare-only with 55.47%, by 0.78%. NN wins the regular challenge with 17.75, by 9.00. I win by 7 vs NN. Both group challenges reissued. The individual challenge will be reissued tomorrow evening. [NN’s group challenge was due to being the only one to cope with CHO’s bizarre takeout double of a 1S response to 1H, asking us to be a minor, with 1=3 in the minors. We all played 3D; only he made it.

EATA: lose to procrastinator by 2, to AA by 3. Both reissued

EATA: win by 38 vs AA. Also to be reissued this evening.

EATA: win by 18 vs procrastinator. All challenges reissued (including NN, even though I can’t figure out what happened o the last one. I don’t think I had played all the boards, maybe none of them, but it should not have timed out yet, I believe.

I elected to bid 3H, which notes say is 10+ HCP, forcing to 3NT. Seems quite reasonable, even though partner may be stuck if he doesn’t have a sure heart stopper, when even Jx would be fine. Well, partner didn’t have a heart stop, and decided to pass 3H. Down 3. Only saving grace is that 3NT would be down 1 if my RHO led the heart 10 from 10xx. But that won 11 imps when procrastinator doubled 2H (which notes say is penalty) and it couldn’t be beat.

I had terrible internet problems all day. I kept being unable to connect to BBO or getting kicked back out. Happened both with the declare-only group challenge and the 2-way with procrastinator. I finished the procrastinator match so late that I didn’t even try to start against NN or AA; I couldn’t possibly have finished even if no further problems.

procrastinator wins the regular challenge with the relatively low winning score of +8.25, but it was the only positive score. I lose to procrastinator by 24, which could have been worse. I failed to beat 6NT, cold on a heart lead. CHO led a heart, but I ducked my king. Push: same contract and trick 1 at procrastinator’s table. I beat NN by 6 and AA by 9. In the declare-only, procrastinator and AA tie for the win with 53.13%.

If you want another challenge (it will be a first for me), you can sign up for the Country vs Country challenge, 32 boards at any time on Oct 3-5, with bots I assume. Cost is .10 bbo$. (But if you don’t have any bbo, there’s some minimum purchase. $5 maybe)

Anyone else doing the Country vs Country championship? After 15 boards, several bad ones.

Finished the Country vs Country challenge below average, after another horrendous blunder today.

Oops. Got too busy and did not play the challenge against NN or procrastinator. Perhaps overoptimistically, both reissued.

NN and procrastinator were probably shocked on this board to lose 6 imps when making 1NT doubled. How could they imagine the idiocy that occurred at other tables? 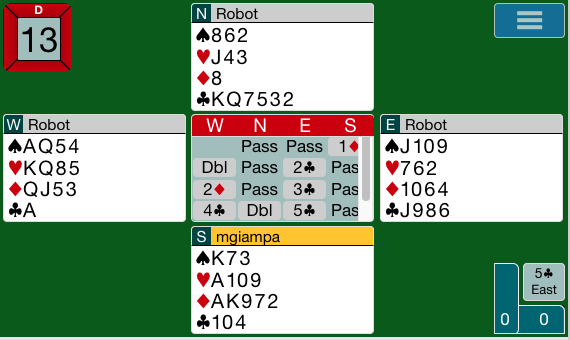 I wondered about it too. What could partner’s double of 4C possibly be? Could he possibly be intending takeout at the 4 level after passing 3 times previously? But if he was doubling 4C for penalty, why was East bidding 5C over the double? And if he wanted to double 4C for penalty, which let them play 5C undoubled?

Even without knowing why he was doubling 4C, I had such good defense I almost doubled 5C. Should have. It went down 5 (down 6 against AA). No one doubled. (The explanation of the double was “8+ HCP, 8- total points”. Sounds suspiciously like it should be exactly 8 HCP, but looks a lot like 6 to me.)

I beat procrastinator by 10. Reissued. Unfortunately I finished only 5th in District 4 Flight B NAPs, so not eligible for Nationals unless one of the higher pairs decides not to go. Not clear if partner and I would go even if we could.

To my surprise, when I logged on to BBO tonite, I was invited to play in a free 8 board ACBL event with bots. Price was right, so I played, and I won. 0.60 masterpoints. Then reminded I can play those any time for 1.45 bbo. No thanks.

You won all five? Well done.

You won all five? Well done

No. Semi-typo, also influence by all the login issues I was having with BBO yesterday. I had typed most of it before finding the declare-only result and the AA result, and then edited the post wrong.

NN won the declare-only. About to be corrected.

Lots more connection problems. oirg and procrastinator tie for the win in the regular challenge with +9.25. procrastinator has a double-digit win in the declare-only with 64.06%, by 12.50%. I beat NN by 4. I almost get to finish the match against procrastinator, but timed out around board 14. I didn’t even get to start against AA.

:fingers crossed: The only thing that let me play all of the NN match and most of the procrastinator match was using my cell phone as a wireless hotspot. Doesn’t make much sense to me, since other sites seem to work well on Comcast. At least now I will know to try the wireless hotspot if regular internet isn’t working. All reissued. Hoping all will get finished.

GRRR. After typing all the above, I had to use the wireless hotspot again to get it to post. Hadn’t been necessary for GoActuary before.

At least most of these challenges went reasonably smoothly, though in the match against NN it froze 4 times and I had to exit the table then return.

ETA, win by 7 vs procrastinator, lose by 2 to NN. Both reissued