If you want to enter the contest, go here http://d4msc.straguzzi.org/ He clarified the rules to make it clear that only District 4 members are eligible to win free entries to two D4 regional sessions, but all can compete for glory and will often get quoted in the results if they comment.

The January 2021 problem, for anyone wishing to advise me

Though it doesn’t say, I expect 2S and 3C would be forcing.

Obviously 3H is ridiculous. I’m not going to try RKCB with a void. Exclusion KCB (at 5D) seems like a mistake since we’re often overboard.

At favorable vul, 4H may be enough, but he’s allowed to have a reasonably good weak 2. I’m not sure whether an immediate 5H would be preemptive, but I’m leaning toward starting 2NT, then bidding 4H over 3H or 3D, 5H over 2S or 3C, 6H over 3NT.

2NT is obviously the right plan. I think you summed it up perfectly.

2NT did get the top score, with 6 panel votes out of 15 (no more than 3 panel votes for anything else). It was tied with 4H for the top solver choice (14 votes out of 44). Bizarrely, 6 solvers chose 6H. No panelists did.

You open 1D in second seat, and hear this auction (opponents silent)

Do you agree with South’s bidding so far?

Part A: Do you agree with South’s bidding so far?
Part B: With the auction as given, what is your call?

For A: 1D is surely right. After the first 4 bids, 3C would be right. But 2D? Not right; better to show the strong suit playable in slam opposite a stiff right away, with 3D. (It seems to me, though I suppose it is possible that opposite a stiff diamond we want clubs as trump. Also, is there some change partner will think 3D is a no-loser suit opposite a stiff?)

As to our bid now, that’s hard for so many reasons. In particular: WTF is 3S? Probably, especially at matchpoints, it should deny a spade stopper; with one CHO would likely bid 3NT. If that’s right (and even if it isn’t), do we have any good choice? Either 4C or 4D is possible if really forcing, but are they? If partner was suggesting 3NT but our side can’t stop spades (he wouldn’t know about our AK), is it forcing?

if 3S denied a spade stop, then 4S must be forcing, but how will it get us to the right contract?
4H is probably suggesting the possibility of playing them, and I don’t want to.

5NT pick a slam? (If that’s even what it means). And partner wlll often not pick 6D when it is best.

That 4NT invitational is looking pretty good at matchpoints, even though it wrong sides the no-trump. (Until I actually started writing this paragraph, I was going to suggest that my top 3 choices were 5D > 6D > 4D. Then I remembered it was matchpoints.)

I definitely agree with the 2D rebid. I’m not ready to insist that diamonds are trump, which is what the jump would do.

Sorry. I meant to include these descriptions from the problem as presented:

below the problem's auction:

So we are given no information about the length promised by 2C. (We do also have the general description that methods are 2/1 with Walsh). I think this promised 5 clubs, since with 4-4 start with 1H, but the problem does not confirm that. The placement of the statement about 4NT (with no indication it’s a conditional statement about the meaning of an earlier call) to me says that it is invitational now, whether or not I personally agree with that usage.

In fact, here’s a screen shot of the problem as presented. 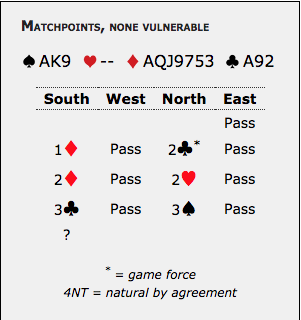 I don’t know whether 4C and 4D are forcing. We have the statement that 2C is a game force, so presumably they are, but whether you can take it to the bank ??? Even if they are forcing, does either convey our strength or distribution?

I’m pretty sure 4C and 4D are forcing–game-forcing should be literally unless otherwise stated. In fact, I think partner should have a very clear game force here (he could have probably responded 1H otherwise). 4N feels like an underbid. 4D and 4S seem like the choices to me. 4S will get us to clubs more often than 4D will, but that’s OK I think. Partner shouldn’t have started with 2C with a lousy five-cad suit; that would be pointless. On the other hand, I probably have two more diamonds than I have shown, and surely I want to be in D or NT opposite Kx. So probably 4D

Even if we accept 4C and 4D as absolutely game forcing, we have a ton of extra values, don’t we? What are we going to do over various continuations by partner over our 4D (especially over his 5D)?

If we bid 4D and partner bids 5D, we can bid 5S. Partner knows we have a trump loser for not rebidding 3D, so he won’t bid the grand without DK (and decent clubs). Actually, I think this makes 4D by far the best rebid. We can cue spades later. We need some way to get to 7 when it’s right, and RKC is useless here with the void. If partner additionally has the HA, he may even be able to bid 7N over 5S. No bid except 4D is both forcing and shows the source of tricks in diamonds, which is what partner needs to hear to have a cooperative auction.

You could argue that partner should have bid 3D with Kx of diamonds, but even then he might have stiff K, which would be good enough.

Problem 1A
Steve White: No (specify in comments). Even though 2C created a game force, we have so many slam prospects we are almost sure to have problems describing our hand later. It would be better to bid 3D immediately. Reserving 3D for no-loser suit is a great agreement when you have one, but a strong hand with a one-loser suit is much more common.

Problem 1B
Steve White: Four diamonds. Trusting that our agreement is that this is game forcing auction, and that partner will not decide to pass. 4D here may be an action better played as not forcing, but since we have agreed it is forcing and we have a hand that calls for 4D forcing, let’s use it. Will not pass 5 of a minor.

Observation: should partner’s 3S, at matchpoints, deny a full spade stopper? Presumably so. 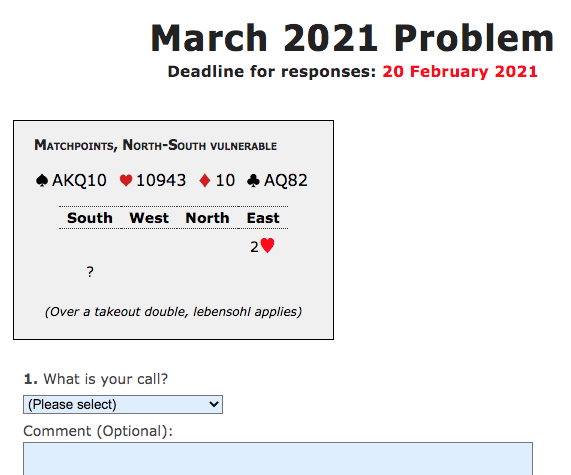 My bid would also be 2S, but I think 2NT is a better second choice than Pass or Double. After all, xx or a singleton honor opposite will stop hearts. (xx means a singleton honor with LHO since no one opens AKQJxx with a weak two any more, and it’s statistically unlikely anyway.)

Actually the longer I look at this problem, the more I like 2NT. I still think I’d go with 2S, but it’s close.

2 spades was the overwhelming winner. 10 of 14 panelists, and a plurality among solvers. Only pass got 2 panelist votes and it was the clear second place among solvers. 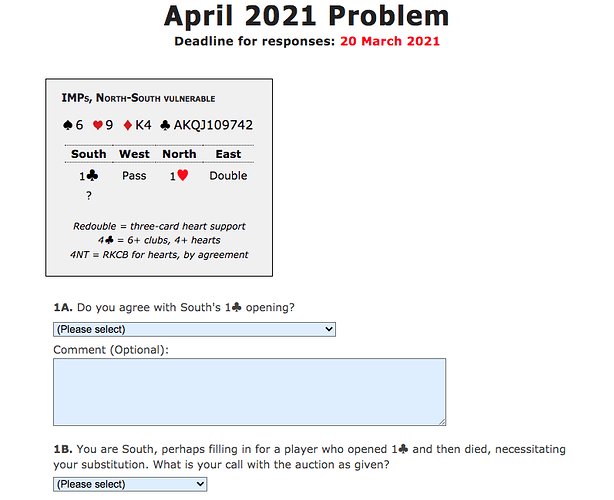 My initial thought about A was “of course”. Now I’m thinking I was on the right track, but should have added the word “not”. In looking at the problem screen, if you want to answer “No” to part A, you must specify what you prefer, and that’s still hard.

3NT has got to be considered, even though most now play it denies a side A or K. Three clubs is certainly not enough. Four clubs might be, but 5 clubs looks best.

Does part B now suggest that he thinks opening 1C may be popular? Not going to convince me to go with 1C. But now?

Four clubs is out. 5 clubs looks pretty good, or is it too likely to provoke a save when we would prefer to play? Could pass or 2 clubs be best?

I think I open 2c there. You have 9 cold tricks.

Could you bid 2d and have it be forcing, I presume? What does 2c mean? Presumably not forcing here, so risky. I lean toward 2d to show forcing level strength, then return to my rebiddable clubs. 5c also a strong contender, but gives not room to explore slam.

I think I open 2c there. You have 9 cold tricks.

You have enough playing strength for 2C, but partner will expect far better honor count. You might not even be able to beat a slam bid by the opponents. Possibly not even a grand slam (if partner has nothing; an opponent has a club void, and the diamond hook works for them.) I will be extremely surprised if any panelists say they would open 2C.

As to 2D being forcing now, yes, probably so and I expect it will get some votes, conceivably even be the top choice, but I doubt it. And true, 2C here is nonforcing, but it would be a plus score, something we may not get if the opponents play the hand in spades (or diamonds).

If we didn’t have to worry about the opponents outbidding us, yes, we might want to consider the extremely unlikely slam possibilities, then settle for 5C, knowing that even it may not make. Since the opponents likely will bid (it’s favorable vul for them), after this start I want to maximize the chances we can play 5C, preferring that to defending a 5-level contract by the opponents. (If 5C makes, that’s almost certainly more than we would collect against their contract, doubled.)

With that in mind, what now? Bidding 5C suggests you want to play 5C, which may increase the chances they will take a sacrifice. (OTOH, it could suggest you are hoping they will save, so maybe they would let you play.) Bidding 3C suggests a very good hand, increasing their belief they should save. What about 2C? Realistically, when you have 9 solid clubs 5C someone is going to bid. Best case, maybe, is that they are in 4S when it gets back to you. If you bid 5C then, it won’t sound like you were anxious to play 5C, so maybe they’ll let you. (Or if partner shows values, they won’t be as certain that you have such long clubs).

The most interesting case, if you’ve bid 2C, is if the opponents are only at 3D or 3S when it gets back to you. If you jump to 5C, then it’s very clear that you want to play 5C, increasing the chances they’ll save. So maybe walk the hand again with 4C, hoping they’ll bid again and “force you” up to the 5C level you always hoped to reach.

A is easy. This is an obvious 5C opener. So what if you can make 6C? If the opponents find 6SX-2 because you give them room (a very likely outcome), you’ll win 7 IMPs by being in 5C.

B is tougher. Now that we’ve let them in the auction, 5C is not as helpful as it would have been initially. But everything else still looks so much worse, so 5C for me.