What’s the motivation here for more documents to be released? From reading the link, it seems that families and friends of 9/11 victims are pushing Biden for this review, and he seems to be cooperating.

Is it Ricksonian? Some type of analysis of why/how the WTC buildings “really” collapsed? Was there actually a plane that hit the Pentagon? Was it an inside job? Who knew what/when beforehand? What additional information do these folks seek? 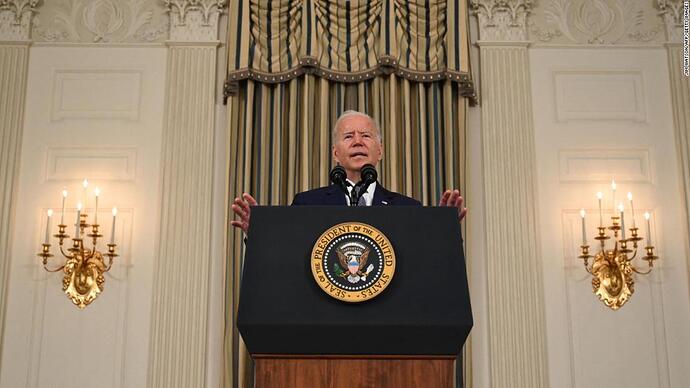 President Joe Biden on Friday signed an executive order directing the Department of Justice and other federal agencies to conduct a declassification review of documents related to the FBI's investigation of the September 11, 2001, terrorist attacks.

What additional information do these folks seek?

If it was your mom, dad, brother, sister, son, or daughter in one of the buildings, you’d probably want probably want every detail you could get. Like, what was the involvement of the Saudi government and is anyone in the US government covering that up?

I think the “outcry” from the “fam/friends of 9/11” is more about getting Biden to address the reason why we went into Afghanistan in the first place.

After all, we’re essentially handing control of the country’s resources back to pretty much the same people who facilitated the orchestration of the 9/11 attacks in the first place.

With the way that the US pulled out . . . we’ve sent the message to those people that patience is rewarded. And religious fanatics can be very, very patient.

“Fortunately, I always keep my questions numbered, in case of such an emergency.”

All my own opinions, not facts as they appear to be presented.

I’ve got on the TiVo queue the NatGeo documentary series that they made some years ago (I think) and rereleased this week. Maybe they added to them. I haven’t watched but I know it will be tough to get through.

After further research, I think they’re interested in exploring the Saudi government connection.

That seems very reasonable. I wish them luck (but I don’t think they’ll get the answers they want).

Not sure if this is the best thread - and maybe not an appropriate post anyway, but…

Yesterday I spent most of the day in an activity with religious overtones. Ok - I guess there were nothing but religious tones - I was recording some songs with the choir I’m a part of.

The conductor mentioned at one point how what we were doing was a good tribute to the victims of 9/11 - which, okay, that’s fine as far at it goes. But he went on to describe the victims as people who “died for our country”.

I’m having a hard time with that categorization. Maybe those that died in the Pentagon, and perhaps those on flight 93. Those in the towers, though - I’m not seeing it. To me, “died for our country” implies a conscious decision to put oneself in danger for the benefit of the country. Those victims just went to work that morning.

Trying to turn their deaths into an act of patriotism just seems to cheapen it for me somehow. I’m not sure exactly why.

Yep. I’ll go with “the conductor just got a little carried away with his rhetoric there”.

I can’t help extending this tangent. This is a 2011 story in the WaPo. I hadn’t read it until yesterday. I guess these people count as “heroes”, even if they ended up as spectators.

They were gearing up in the pre-flight life-support area when Sasseville, struggling into his flight suit, met her eye.

“I’m going to go for the cockpit,” Sasseville said.

She replied without hesitating.

A pilot reflects on one of the lesser-told tales of Sept. 11: how the first counterpunch the U.S. military prepared to throw at the attackers was effectively a suicide mission.

I’ll go with “the conductor just got a little carried away with his rhetoric there”.

Their deaths resulted in some actions that did provide greater security for our nation.

It certainly highlighted one gigantic advantage of living in the Po’. We’ll never be the target of a large scale terrorist attack.

It certainly highlighted one gigantic advantage of living in the Po’.

Heh. I was in the tallest building in something like the 127th largest city in the US on 9/11.

And people were talking about how “there’s no way I’d go anywhere near the ABC building today!!!”

Uh, yeah… I seriously doubt we were a potential target.

Well, i feel the default should be openness, and unless there’s a compelling reason to keep them classified, they should be declassified.

After all, we’re essentially handing control of the country’s resources back to pretty much the same people who facilitated the orchestration of the 9/11 attacks in the first place.

But i think you may have hit the actual, political reason here. In fact, i suspect Afghanistan and the Taliban had nearly nothing to do with 9/11. The key actors were all Saudis. But Saudi Arabia is our ally, and Bush wanted to punish someone, and it couldn’t be them. So he invaded Afghanistan, because bin Laden hid there for a while. (We didn’t overrun Pakistan, even though he took up residence there.)

I’m biased. I never believed Afghanistan was more than tangentially involved in 9/11. When Bush started rattling sabers i wrote to my senators and Congressional rep and to Bush urging them not to attack. I never thought we belonged there. I had hoped that maybe we were at least doing some good while we were there, but the immediate collapse of the corrupt government we established suggests that was a vain hope.

Publishing the evidence that 9/11 was planned and executed out of Saudi Arabia may soften the pain of giving up on our occupation of Afghanistan.

It does seem a bit to a stretch to classify some of the deaths as “dying for their country”.

Perhaps his comments were directed toward the firefighters, LEOs, and others who went into the twin towers.

Even the firefighters I have trouble categorizing as “dying for our country”. They were absolutely heroes, but they died trying to save people in the building - not trying to defend the country.

yeah. If we’re doing anniversaries this is the 100th anniversary of this poem, which is when we first officially decided that “dying for your country” is ***ing bullshit.

I’m with: we’re not going to reveal anything at all that would damage our plans.

But FWIW, I think these reviews are good. FOIA dumps do tell us some of the horrible and illegal things our government does, usually decades late, including a lot about the war in Afghanistan.

Heh. I was in the tallest building in something like the 127th largest city in the US on 9/11.

And people were talking about how “there’s no way I’d go anywhere near the ABC building today!!!”

same here. suburban office park w 4 or 5 buildings and a combined 50-60 stories. 4 miles from the mall of america (which is RIGHT NEXT TO the airport). as we watched NYC crash into hell on tv a colleague said he was worried about our location noting “a lot of people work in these buildings!” i walked away and wondered where this american jewel of an office park rated in a terror plotter’s rank listing. we weren’t even the top target in our suburb.

I’m not aware of any attacks yesterday on the 20th anniversary. It would seem like there were some large gatherings on people which tend to make attractive targets for terrorists.

I’d like to think it’s because terrorists know not to mess with the USA anymore, but it’s much more likely that any and all attempts are effectively shut down before they happen due to the surveillance efforts of the FBI, CIA, NSA, and a host other government agencies.

But he went on to describe the victims as people who “died for our country”.

I think this can have a wider meaning than “putting yourself in harm’s way to advance national interest”.

Suppose that the US has a purpose. Then history is how we understand that purpose as reflected in past events.

9/11 was part of that history. It is an important part of the US fulfilling God’s role for it (we are trying to understand what was said in your church.)

Then to die in 9/11 is to participate in, and be an essential part, of that history. Your death takes on significance in that way as part of God’s plan. (Your life has meaning too, but separate.)

I think this could be comforting if you consider the US to have a net-positive purpose and effect in the world.

I’d like to think it’s because terrorists know not to mess with the USA anymore,…

Tell that to the guy who placed bombs near the DNC and RNC headquarters in DC on 1/5/2021.
Oh, and the other thousands of terrorists who stormed the Capitol on 1/6/2021.

They are planning their next attack for September 18th.