He offered a mix of liberal agenda items and many things that had bipartisan support.

Lots of tripping over words but he ended strong, and both sides applauded. I thought better than expected.

I didn’t watch, so i hope this thread fills me in.

Not much to say really. He gave a rundown on Ukraine then tried to guilt the Senate into acting on voting rights and green energy etc.

Speech was fine, just like his performance as president.

Didn’t watch but read the reporting and saw some highlights (as usual). It appears the right is hanging onto 13 military employees who died in Afghanistan because of the pullout, but Biden didn’t talk about them.

Okay. Lots of soldiers and foreign civilians have died.

A lot of misspeaks but it was fine, pretty forgettable after the beginning bit about Ukraine imo. Just an illustration of the silliness of electing retirees.

Any thoughts on the “responses” to the SOTU?

Didn’t see either, but thought it was interesting that the “Progressive” wing of his own party gave a response.

We’re now one year into his presidency, and instead of moving America forward, it feels like President Biden and his party have sent us back in time—to the late 70s and early 80s.

Maybe I forgot but weren’t the 70’s and 80’s when America used to be great? Wasn’t someone promising to take us back to that time? Make us great again or something?

The rest of her speech was pretty good and hit Democrats right where they are weak. Republicans are going to landslide in November IMO. 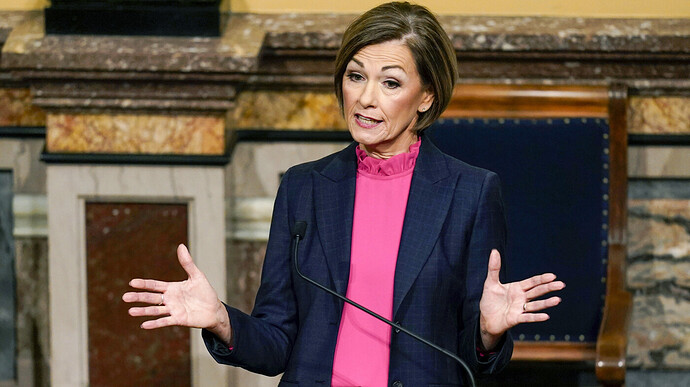 Read Iowa Gov. Kim Reynolds' Republican response to the State of the Union

A lot of talk about buying American goods manufactured by American workers and American companies, but not American energy…we’ll still buy that from Russia and the Middle East I guess. Talked a big game about sanctions and punishing Russia/Putin, but not planning to stop funding their war as we’ll still buy their oil.

Maybe I forgot but weren’t the 70’s and 80’s when America used to be great? Wasn’t someone promising to take us back to that time? Make us great again or something?

Uh, no, the 70s and 80s weren’t great. I lived through those years. We had a lot of inflation, we waited in line to get a few gallons of gas, there was lots of overt racism, and being anti-gay was just the norm. Being trans was unthinkable. Sexism was less acceptable, but pretty normal, too. Of course you should quit working if you have a child. Or don’t have children, if you feel that strongly about it.

Unless this war blows up, things are a lot better now.

I suppose the 70s and 80s had some nice features if you were a straight white cisgender man. But there were still the gas lines and inflation.

I think Nick was attempting to point out Republican hypocrisy

This, seemed like to me Trump really harkened back to those days.

The Reagan years for sure.

Arguably his speech was better than I gave him credit for if the Progressives are writing the rebuttal.

To be clear, the Progressives wrote one rebuttal.

You’re likely correct, but these arguments from Reynolds are a mix of exaggeration and nonsense.
-When runaway inflation was hammering families
This is an exaggeration and outside the control of the government.

-violent crime wave was crashing on our cities
An exaggeration, but more valid after the ACAB Stuff.

-and the Soviet army was trying to redraw the world map
Not new under Biden. It’s especially weird after the leader of their party actively tried to help Putin while praising him.

-The disastrous Afghanistan withdrawal did more than cost American lives; it betrayed our allies and emboldened our enemies.
The withdrawal was negotiated between the Trump admin and the Taliban. Perhaps the logistics of the withdrawal could have been different, but I haven’t seen any experts explain what could have been done differently.

-Waiving sanctions on Russian pipelines while limiting oil production here at home
First fully valid claim. Also pretty esoteric and I’m guessing most people have no idea what this is a reference to.

-The President and Democrats in Congress have spent the last year either ignoring the issues facing Americans or making them worse.
They were warned that spending trillions would lead to soaring inflation. They were told their anti-energy policies would send gas prices to new heights. But they plowed ahead anyway, raising the price at the pump by 50% and pushing inflation to a 40-year high.
Is there any evidence that the spending caused these problems instead of the pandemic’s impact on supply chains? It’s also warped the economy into one that was more goods driven and less services driven than it was before.

-The Biden Administration believes inflation is ‘a high-class problem.’ I can tell you it’s an everybody problem.
This is accurate.

The whole thing just sounds like repeating all of the segments from Fox News regardless of accuracy or validity. Some of them are really insane like:

-It seems like everything is backwards. The Biden Administration requires vaccines for Americans who want to go to work or protect this country but not for migrants who illegally cross the border.
Yes, we don’t have requirements for people who do things illegal, because what they are doing is already illegal.

However, N_P is probably correct. Rep and Ind voters probably loved the meandering mad-libs of complaints. Biden’s approval is terrible and I don’t see it improving. 2022 midterms will be a bloodbath.

I’m old enough to remember the same stuff. We bought a house in April 1981. We were “lucky” to get in at 11.25% for a 3 year adjustable (the S&L that had the prior loan gave us a “deal” to avoid a debate on whether the other loan was assumable).

But, if you were a straight white male with a college degree you could do okay.

However, N_P is probably correct. Rep and Ind voters probably loved the meandering mad-libs of complaints. Biden’s approval is terrible and I don’t see it improving. 2022 midterms will be a bloodbath.

Thanks for the rundown. I was expecting her to brag that Iowa passed one of the most restrictive abortion laws in the country and passed a law prohibiting CRT (or what Rs think it is) in schools.

At least one independent doesn’t fall for that stuff. Unfortunately, I’m sure you are right about most.

I guess I haven’t seen Biden in a long time. He looked very “made up”. I started watching when he was talking about COVID19. He got his points across, though the transitions from one topic to another did not flow well.

I’ve seen him on TV several times in the last week. The Russia-Ukraine situation couldn’t go without comments by the president.