Another case for open borders

People call traffickers the scum of the Earth but the people who are really at fault are ourselves - who put the leaders in power to decide to put up barriers to travel which lead to the formation of an unregulated black market: 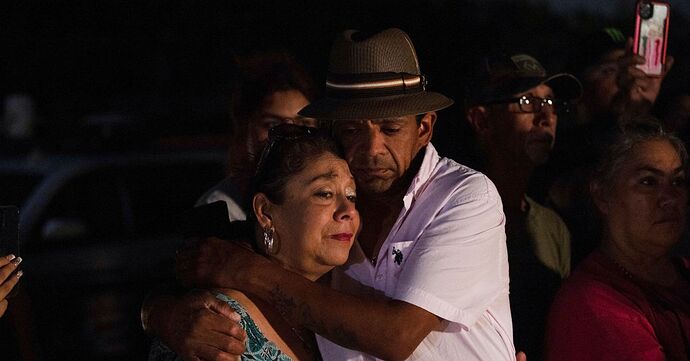 'Stacks of bodies': 46 dead migrants found in truck in Texas

The bodies of 46 dead migrants were discovered inside a tractor-trailer on Monday in San Antonio, Texas, city officials said, in one of the most deadly recent incidents of human smuggling along the U.S.-Mexico border.

Clearly, people want to travel and work, and they pay ridiculous sums of money and risk death to do so. Just open up the borders.

Very predictable weird to see the same pro-life people who demand laws that ensure female migrants in America who become pregnant must deliver the fetus come hell or high water celebrating the deaths of 46 migrants.

Almost like there’s some two-faced distinction going on, but I … just … can’t … put my finger on it.

This is too horrible to envision.

However it will not prompt any mitigating immigration reform any more than shooting 20 kids in a school will lead to meaningful gun reform. Dems and Reps will not agree on anything that is truly helpful.

In related news, this is quite the take. Maybe I should put this in the ‘Republicans say the darndest things’ thread, dunno. 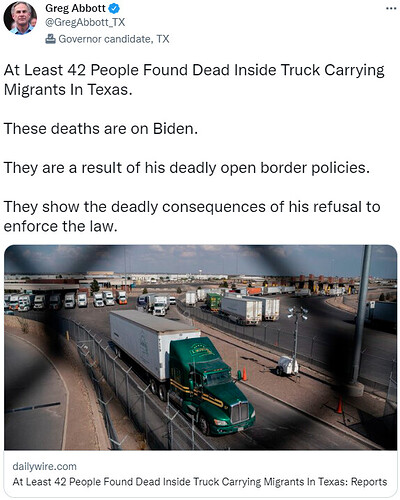 I haven’t seen anyone celebrating this event. Or any of the other trailers full of bodies found because the cartels left the people in them to cook.

This is tragic. Still doesn’t change any of the perfectly valid reasons for having border controls. Especially at our border with Mexico. The south and central American countries are simply too weak/corrupt to control their own borders which makes this one very attractive for smuggling operations into the US.

Only thing for certain is that the Reps will blame this on Dem policies but nothing truly constructive will result on immigration policy.

Biggest part of this problem is the conditions in the specific Central America countries that drive people to these desperate measures. Can’t change the history that produced the conditions but hopefully US policy going forward can be more helpful.

Can’t change the history that produced the conditions but hopefully US policy going forward can be more helpful.

Eh, some people think we DID produce the conditions, which led to the emigration from these countries. Let me go look for some claims…

Eh, some people think we DID produce the conditions, which led to the emigration from these countries.

We deported a bunch of gang members to Central America in the 80’s, arguably setting the stage for destabilization of parts of the region, creating motivation for migration.

I was thinking more about the aid we stopped sending.
I haven’t looked too hard, though.

Googling Guatemala, the United Fruit Company and the CIA (1950’s) might be a good place to start to look at interference in Central American affairs! Or just read A People’s History of the United States.