All delayed. Not sure of Civil Rights Act of 1964, though.
So, thinking, if the Civil War is delayed until the turn of the century or never happens, do the automakers start building cars in the South with slave labor, making the South a much more powerful political faction?

If the Civil War is delayed 10 years, is Lee too old to take control of the confederate army?

The GOP no longer has much of a reason to claim to be the “Party of Lincoln”.

I’m surprised they don’t use Teddy Roosevelt more often. A real manly man. Killed animals. Helped an expedition find the headwaters of the River of Doubt (renamed the Roosevelt River, then went over the mountain and ended up on the Amazon.
Ignore that trust-busting and Progressive stuff.

I’m not sure how much would be different other than Bill Clinton being the first POTUS to be impeached instead of the second.

I thought Johnson was trying to mostly follow Lincoln’s plan for reintroducing the Confederate states without (too much) prejudice, reconstruction, and building the transcontinental railroad in hopes of preventing the next civil war between the east & the west.

Reconstruction may have looked a little different/better, I guess.

He gets assassinated a year later?

You all are horrible at this. Every conjecture is the exact same thing happens a few years later LOL.

I mean if Lincoln isn’t President maybe the 2 countries just split and slavery is maybe still a thing and the US isn’t the US it’s just one Industrial country and another backwards one with slavery.

Some things are just inevitable.

It’s a bit hard to believe that the south would have won a civil war a few years later. Even with really crappy military leadership on the union side, the confederates were out matched in numbers, money, equipment, etc.

Now, if whoever was president decided to just let them go, that would have changed things.

Ok, that would be a conjecture if Lincoln had never been President.

But I thought we were discussing if he hadn’t been shot… in which case his Presidency would have been longer, not shorter.

Every conjecture is the exact same thing happens a few years later LOL.

Hey, I pointed out that Bill Clinton would have been the first President impeached.

Yeah - I was jumping back to the previous topic. Should have been clearer.

By the time Lincoln died, the war was over. His death had no impact on whether there would be two countries.

New one (I think we discussed this one a while back on the AO, but still…):

We probably avoid the Nazis (unless something like them showed up in Brittain for France instead). Probably not much else directly different, since there wasn’t really any ideological difference between the sides in the war.

since there wasn’t really any ideological difference between the sides in the war.

Well, one side was, “We want these territories of yours” and the other was, “Well, we’d rather not give you those territories. So, meet us at the bike racks, 3 o’clock.”
Are these ideologies the same (“We want land”) or different (“We want your land” vs “We’re not giving it up”)?

OK, let’s start with how they could win the war: not sinking the Lusitania, and keeping US forces out of France.
Now, England and France call for peace. What do they give up? Bunches of African colonies, I’m guessing. Some Asian territories. India maybe?
Eventually, Germany gets into it with the USA over Asian oil, joins forces with Japan and together they raid Pearl Harbor. Then, we kick their asses in WWII.

I think France would have lost a chunk of northeast France which would have been a big deal.

And if the US was on the losing side of WW1 I bet they’d be even more reluctant to join a WW2.

So, the causes of WWI are a bit more nuanced then what was laid out here. One of the major causes of the German states joining together to form Germany in 1880 was the fact that France and Russia kept using Germany as a battleground. So Germany developed a bunch of alliances that were designed to keep them out of war. Unfortunately, those alliances pulled them into a major conflict and Wilhelm II was a xenophobic megalomaniac who wanted to create a global empire. In order to truly change the outcome of WWI, Wilhelm II really needs to have been not in power. So maybe if Frederick lived longer or if Bismarck wasn’t removed as Chancellor. Or if the German states had rallied to a Bavarian rather then a Prussian in 1880.

Without WWI ending the way it did, WWII never happens. The penalties imposed upon Germany by the Allies after WWI meant the bulk of Germany’s coal and steel production was sent out of the country. The lack of resources directly resulted in the deep depression that led to the rise of Hitler and the Nazi party.

Watching black adder, and I think he summed up the cause of WW1 quite nicely: it was just too much effort not to have a war. 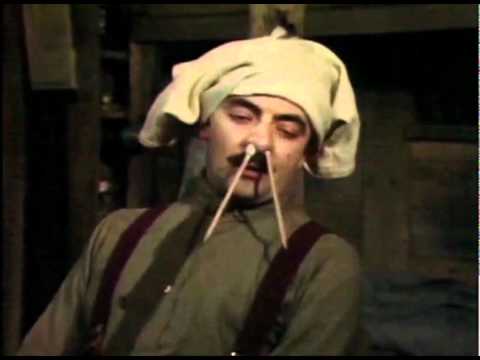