Right now, I’m guessing that allocating it to properties on that basis isn’t going to change peoples’ preferences for private lots.

Totally agree. It doesn’t change preferences. It can change the end result, though. Using your Lexus…sometimes people buy a car that is not a Lexus. If they cannot afford a Lexus, perhaps they go for a KIA. Give peeps options, and let them decide.

An example of a project or two. Disclaimer, these are not “my projects.” I have no inside inofrmation
Start in SF, where the issue is Market Street. SF plan is to reducr autos and get dedicated bus and rail service. This illustrates an impotratant point. If you pur in light rail, or increase bus routes, they have to be faster than using a car. There is no way to be more convenient than a personal vehicle, so MT has to win on speed. You can improve convenience by making increasing the busses peer hour. Have them running every 10 minutes instead of 30 minutes. Big difference to users.

Secondly look into Minneapolis. They eliminated SR, and rents are falling. But not because of SR changes, it takes more than that. Here’s a good Reason.com article. [Its more than structures, it means looking at parking and Floor Area Ratios as well] (Eliminating Single-Family Zoning Isn't the Reason Minneapolis Is a YIMBY Success Story)

Secondly look into Minneapolis. They eliminated SR, and rents are falling. But not because of SR changes, it takes more than that.

I stumbled across this article about Houston, reportedly the only major us city without zoning. Seems to be working fine for them, and density does indeed happen when it’s not artificially restricted by zoning.

Check out this 20 year transition where a lot of single family residences were replaced my more dense townhouse infill. 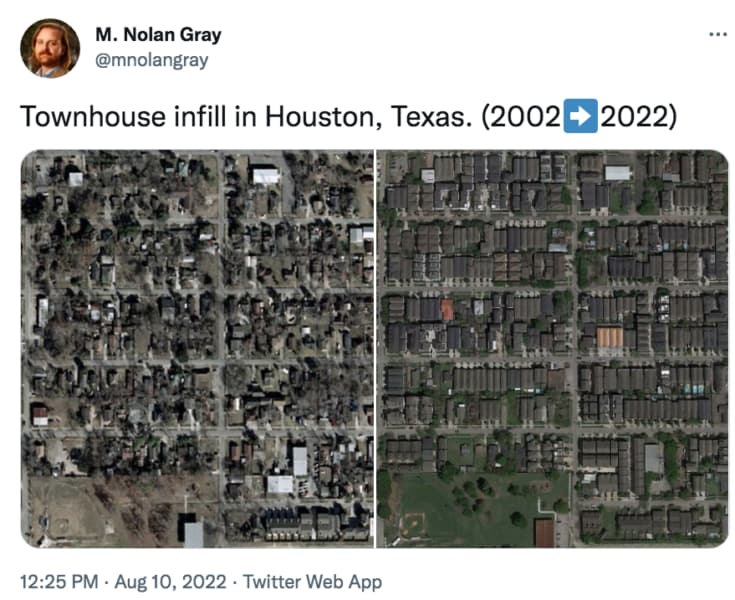 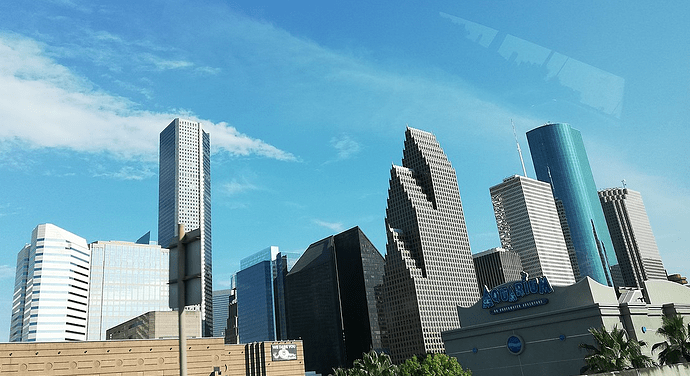 The city without zoning - Econlib

Houston is the only big American city without zoning. Some people argue that Houston is effectively zoned, as many neighborhoods have deed restrictions that limit development. But in his new book on zoning, M. Nolan Gray points out that only 25% of...

Did that change gradually, or immediately, after that hurricane swept in and destroyed everything?

So, it’s zoned civilly instead of regulatorally.

Don’t know, but think it was gradual rather than all at once

Thanks. I have to point out that your list includes the three largest cities in Germany, but I don’t think that is terribly important for this.

I’ve had fun with Google maps and Hanover. This is my impression. The blocks look similar to London. Solid walls of apartment buildings right up to the sidewalk. From the air, it is open figures with red roofs and green gardens inside the block. I assume apartments have windows toward the street and toward the garden. Corners have two walls that face streets. I looked at one block that happened to be a rectangle with buildings 400x170 feet. I’d guess floor space for 50 people per level or 200 on the block. With roads, a collection of 3x6 blocks like that is a quarter mile on a side and would have 3600 adults. Enough to support local businesses of a few restaurants and small food stores. A half mile square makes for more business possibilities. Businesses were concentrated on “main” streets.

The blocks like that weren’t appealing from street level. Just a 50 foot wide space with cars lining both sides of the narrow street. In some neighborhoods, lots of bikes locked to low fences. My guess is parking for one car for half of the two-person apartments.

Other blocks had wider streets, more green, more interesting facades and sometimes different parking arrangements. They seemed to have deeper buildings. Maybe the deeper buildings kept the density up.

Hanover has urban trains, sometimes below grade. It’s hard to get a feel for the walk to one because transit maps aren’t drawn to scale.

The city has large forest preserves. I can see that many people could ride a bike on city streets for a half mile and be into a preserve. So the overall city density isn’t so terribly high because the compact neighborhoods are offset by large share open areas.

I get the attraction of that. We have friends who moved to Berlin on a two year contract many years ago and never came back. I remember them talking about small food shops and local parks and clean, safe public transit.

I’m trying to see how you transfer it to a US city. It seems like a city would have to have a large piece of available land someplace close to a city center. It wouldn’t work to do just a few blocks.

It doesn’t change preferences. It can change the end result,

I meant that the dollar amount wouldn’t be large enough to change the result.

you pur in light rail, or increase bus routes, they have to be faster than using a car.

I definitely agree. I’ve always figured the advantage of subways is they don’t have to deal with surface traffic. The riders’ time loss from waiting for the train is offset by the faster travel once on board. When I lived in Chicago, I could take the El downtown at least as fast as I could drive, if you include being thrifty about parking.

The Minneapolis article is interesting. I assumed getting rid of single family zoning would mostly result in older two story houses being converted into duplexes, with very little new construction. We rented the first floor of a two story when we lived in Lincoln, NE. I assumed conversions were common around the university. I wonder if Minneapolis upscales parking when they convert.

unlikely on the upscale parking. The 40 year urban plan is decidedly non auto.

They just banned all new construction of drive thru businesses. Not a good signal if your looking for something for the drivers.

I meant that the dollar amount wouldn’t be large enough to change the result.

It already is. That’s part of the homeless problem. Even at the unadjusted tax, those bottom 2 quantiles are SOL. They can forget about getting their “preference”. And for folks in the top 2, well, they will probably not be affected. They have the money.

I agree that it would take a big change for Des Moines to become somewhat like Hanover. I liked Hanover when I stayed (been there a couple of times) and I probably used light rail more than the subway.

You’re probably right that it might have to happen in sections of bigger cities, like Denver, Portland, Seattle, Boston, SF or LA to densify close to transit before the smaller cities will show any interest. Apologies for including Berlin, Hamburg and Munich - they’re much bigger than I thought they were when I visited!

That’s a fascinating photo comparison. He doesn’t give a location. I tried finding it with Google maps, but I couldn’t. I see lots of single family close to downtown.

I did notice freeways in Houston. They can be real barriers.