The Islanders didn’t have cap space, from what I recall. Neither did the Flyers, who were rumored to be in on him. The Devils are still building for the future. Columbus, I could make an argument that they’ll be back in playoff contention shortly even if I think their HC isn’t the right guy to do it.

Could be worse. He could be playing in Arizona.

Arizona should not have a team. Canadian cities like Hamilton and Quebec City would fill their arenas every night if they had a team. Toronto could support two teams but Leafs would never permit that.

Promotion/relegation would solve the problem of teams that do and don’t belong.
But NO owner will agree to that.

Nitpick: Arizona has a team because someone wants to own a team there.

Arizona also has a team because it’s a pro sports league’s right to decide who can and can’t own a team, and where it can and can’t operate. That’s what the entire bankruptcy saga sought to establish.

I would also offer that not every owner wants to maximize revenue across the league, so teams in locations that “don’t deserve one” enhances both their profitability and their value because of the exclusivity that comes along with being the only available team in town.

I don’t think it’s just the owners who’d balk at it. It would also require a massive change in the business model of professional sports in North America that makes MLB’s reorganization of the minor leagues look like doodles on a napkin.

I agree that it would take maybe a ten-year notice, at the minimum, so that owners who generally don’t know what they’re doing except making money hand-over-fist (and some can’t even do that (Coyotes)) can sell their teams. 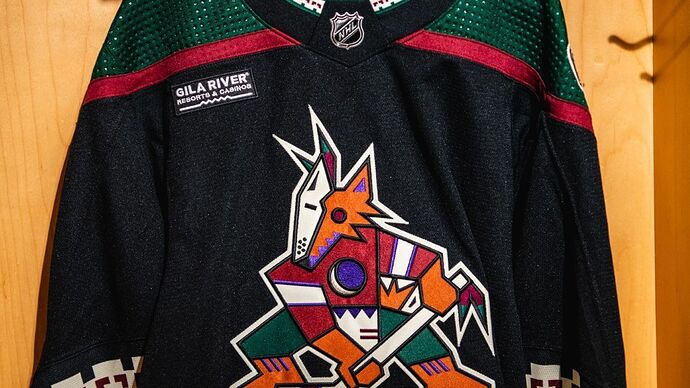 Arizona Coyotes announced a multiyear sponsorship agreement with Gila River Indian Community on Tuesday and will be the first NHL team to have a Native American tribe advertise on its jersey.

Yeah, time to start up the tomahawk chop in,… um, Tempe!

The Coyotes will play in the new multipurpose facility on ASU’s campus for at least the next three seasons while seeking to build an arena on city-owned land in Tempe. Mullett Arena, named for a family that has supported the ASU Sun Devils’ Division I hockey program, will have an official capacity of 5,025 fans, and will hold between 4,800 and 5,000 fans for Coyotes games.

“I need to bilk some city out of tax dollars. Tempe, show me what you got. If not, I’ll just go up to Scottsdale…”
Never mind that the Suns play in a Hockey-playable arena. Never mind that Glendale has a now-empty hockey arena with a used scoreboard from Auburn Hills.