We had a spirited thread on the AO (RIP). And I think we’re all up to speed about what we think it is.
The author was recently denied tenure at UNC, just because.

UNC-Chapel Hill's board of trustees did not approve tenure for Nikole Hannah-Jones, which a report claims was due to conservative pressure against the decision

An opinion about it:
https://www.charlotteobserver.com/opinion/article251552438.html

All of this is happening as conservatives and even moderates claim there is a moral panic about race in this country fueled by the left.

Their aim is clear, to silence any and everyone who refuses to give into their demands that we only see, write or talk about this country in the way that comforts them. That’s why those serious about no longer being beholden to pernicious racial and other myths that have harmed vulnerable people for generations better check their spines. Because they are coming for you, too.

Other sources are clarifying that she was never recommended to the board of trustees for tenure in the first place. The committee that does the recommendations requested more time to review. Where that process halted/failed, I have not seen any additional detail. Regardless of that technicality, I agree it is still clearly politically motivated: 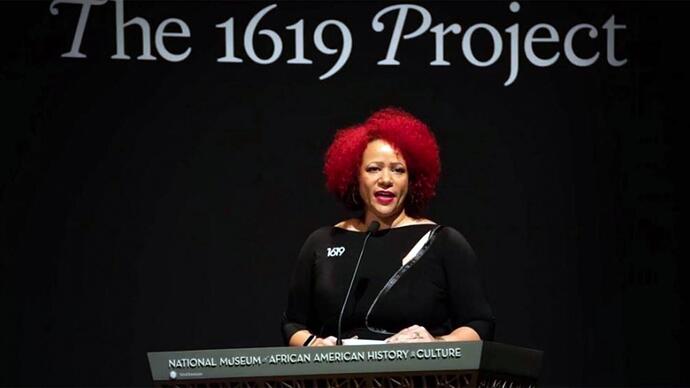 Amid protests, UNC-CH board chairman says no tenure decision has been made on...

The Youtube channel Crash Course has started a string of episodes on Black History in the US which starts in 1619. Pretty interesting thus far.

The 1619 Project is an absolutely stupid idea that many historians refute as being not useful.

The triangular slave trade began occurring in the Americas over 125 years before 1619.

Virginia was founded in 1607, not 1619. Even then, it was not thought of as any sort of piece of another entity - it was a British colony. Focusing on slavery as the main piece of American history is colossally stupid and ignores the fact that other European powers were involved in the practice for a long time.

The territory that would later become the United States didn’t resemble the United States that we have today. They were British colonies, and were engaged in the slave trade just like the other British colonies and in the western hemisphere. This was not a practice that was uniquely American - it was practiced by the British all over their western colonies, just like the other European powers were practicing it in theirs.

This “project” was merely started by someone looking to garner attention. My university US history course did a fine job of discussing the triangular slave trade, and covered the slave trade far before this arbitrary and rather meaningless year.

The Youtube channel Crash Course has started a string of episodes on Black History in the US which starts in 1619. Pretty interesting thus far.

Love me some Crash Course.
As long as it is not John Green presenting.
He really grinds my gears.

This “project” was merely started by someone looking to garner attention. My university US history course did a fine job of discussing the triangular slave trade, and covered the slave trade far before this arbitrary and rather meaningless year.

I did not have a US history course in University. I had learned a minimal amount about slavery other than it existed until the civil war.

History is really a somewhat arbitrary presentation of facts and events, and what they mean. I think there is a lot of arrogance on the topic of US history as we like to think we are the greatest most perfect nation ever. Really, we spent a lot of time with that as the goal, and made a lot of pretty bad mistakes along the way and those mistakes are going to be mentioned in history books but probably never given the emphasis they deserve. I don’t understand the outrage over a presentation of history that focuses on how slavery has shaped the US. Does it go too far at times? Is there any unbiased presentation of US history?

I don’t think my history course was terribly biased one way or the other, about it being a “great” or a “bad” nation, either way. This particular topic was definitely presented as a negative, but of course it’s a negative, it’s slavery. The course depicted it as a common practice of the European colonial empires in the Western Hemisphere. There was nothing special about the land that would become the United States - they were BRITISH colonies, and Britain had been doing the same thing in its other colonies for years earlier, and Spain, Portugal, France, and Holland all had their hands dirty too.

Look at how slavery impacted Brazil sometime - they had a lot higher percentage of their population as slaves than the US. There’s nothing particularly American about slavery. This was sadly the common Western Hemisphere practice for quite a long time.

Yeah - he’s my favorite. His brother takes some getting used to, but he’s grown on me.

Does it go too far at times?

As one example, my understanding is that at one point it included the claim that the primary reason the 13 colonies rebelled was to protect slavery. This is simply untrue. And in fact, the revolution helped encourage the abolition movement in both America, and maybe also britain? (Britain did not allow slavery on its mainland, but still did in its colonies, maybe.) I think this may have been when the quakers decisively turned against slavery, for example.

Since then, it has been changed to state that this is was one consideration for rebelling.

ADDED: Incidentally, this isn’t as bad as reading the constitution in congress while pretending it never allowed slavery.

They have backed into more defensible positions a few times, so while it’s good they’ve been willing to edit where needed, they just haven’t always done so.

I also can’t help but wonder if they could have found a better title.

I am team Hank.

“The Fault in Our Stars”

Oh I haven’t read any of his books. I’m not big into fiction. I entirely know him through youtube videos and ted talks.

I actually knew of John’s YA novels first, then only in the past few years have become addicted to Sci-Show and all the Missoula, MT based content that Hank produces or has a hand in.

And then I was SHOCKED to find out that Hank was the brother authors the YA author.

So. I came to this all from a really odd angle.

I really have no way of knowing how important slavery was to the colonies at that time. Given the South fought a pretty big war against the North almost 80 years later over it (and other similar claims about states and their rights), seems to make sense that it was probably at least a pretty big reason.

I don’t doubt the US was the only one relying on slaves, or even the worst. I do think a lot of what it meant to the US history is generally glossed over since it is a difficult topic and that is what we usually do with difficult topics except for those searching out for it.

In any case, arguing about the nitpicks to me just seems like more avoidance.

I do think a lot of what it meant to the US history is generally glossed over since it is a difficult topic and that is what we usually do with difficult topics except for those searching out for it.

Yeah - your basic US history class will have a chapter on the triangular slave trade, slavery will obviously get covered somewhat in the Civil War section, and then you’ll have some MLK and civil rights stuff. My understanding is that the 1619 project is mostly an attempt to fill in some of the gaps.

The Crash Course video about Elizabeth Key (and then the next one about the Slave Codes) was very interesting - the sort of thing that doesn’t get much time most history classes.

Slavery was covered in other sections of my course. For example, Southern states ceding their western claims were attempts to increase the pro-slavery vote in the Senate. Slavery was all over the westward expansion of the US, especially when Kansas’s statehood came into question. It was made clear it was an elephant in the room for a very very long time.